US airline stocks generally gained on Monday on positive economic reports, with Allegiant leading the way, with a 5.1% share price jump.

Also yesterday, Allegiant Travel Company Board of Directors approved an expansion of its stock repurchase programme, having authorised the repurchase of an additional USD50 million of the company's stock.

In other Allegiant news, the carrier commenced a project to add 16 seats to its fleet of 150-seat MD-80 series aircraft. The company currently operates 48 such aircraft and owns nine additional MD-80 aircraft, which it plans to introduce into service in 2011 and 2012. Allegiant also operates three 130-seat MD-87 aircraft which will not be reconfigured.

Allegiant plans to invest up to USD50 million in capital under this project, which includes substantial cabin redesign such as removal of galleys. The first aircraft is expected to be converted in the 3Q2011, with completion of the last aircraft by the end of 2012. 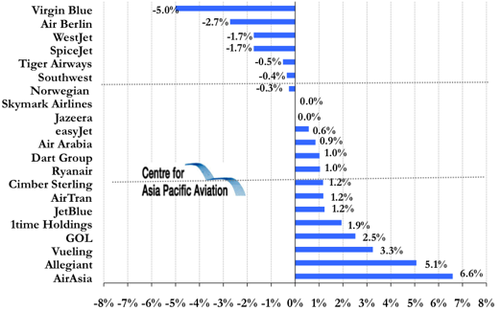