Allegiant margins dropping, but still to die for

Pundits say that when Las Vegas starts to come back you will know the recession has ended. Well, we aren’t yet, as too many hotel rooms are still chasing too few guests. While that effects Allegiant, with its focus on serving the Las Vegas market, it is not so harsh that the company missed a double digit operating margin.

"Our fourth quarter results represent our 28th consecutive quarter of profitability,” said Chair and CEO Maurice Gallagher. “We accomplished these excellent results while growing significantly (a 22% increase in departures versus the prior year) and despite a 17% decline in scheduled air fare (our "selling fare") to USD70 from USD85. However, during these difficult times, our 2009 total ancillary revenue per scheduled passenger grew 12% to approximately USD33.” The selling fare was in free fall last spring.

"Our selling fare increased from USD67 in October to USD83 in December, the highest average fare for any month of 2009 and only slightly below the selling fare in December 2008 - the best year-over-year comparison for any month of 2009,” Gallagher reported. “Additionally, the total scheduled service average fare for December 2009 exceeded that of December 2008, although Total Revenue per Available Seat Mile was down 2% in the same period. Lastly, we achieved a USD31 operating profit per passenger in December, our third best monthly result of the year, in spite of fuel up over 40% from those earlier months.”

"Early stages" of US economic recovery

Crowing about a 26.5% return on equity for the year, Gallagher noted the successful evolution of the Allegiant business model. “Further, on a per aircraft basis, our 2009 combined operating income and depreciation and amortization was roughly USD3.5 million, approximating the amount we currently spend to add an aircraft to our operating fleet,” he said. “Looking forward, we currently see an improving pricing environment. While the economy is in the early stages of a recovery, our segment appears to be returning to revenue norms of past years.”

Upgrading the company’s IT system will be its major focus for 2010, including database and hardware infrastructure. “These upgrades will provide us with the necessary capacity to continue our growth as well as enhance our ability to offer industry-leading, web-based products,” he said. “Our control of our automation provides us the ability to develop our own, unique products and this is a substantial differentiator for us in the travel industry."

Allegiant managed a 13.4% operating margin in the fourth quarter, a decline from the year-ago period when it had a whopping 23% operating margin and even 16.5% in the third quarter. It appears that even wunderkinds can have a down year, but a down year for Allegiant is what mainline carriers would kill for. 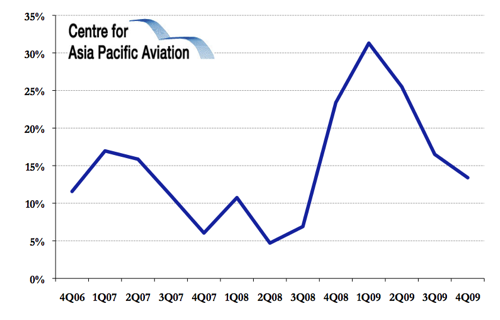 Pundits also say that Allegiant defies classification, saying it is a breed apart even from low cost carriers. But that is fine with the executives at the company who turned in their fifth consecutive quarter of double-digit margins and 12 consecutive profitable quarters. Of course it helps that its selling fares are on the rise, as are its ancillary revenues and, so far, competition has not materialized.

“Interestingly enough, in both quarters our fuel cost was USD2.07,” he said. “Our cost per passenger this year was up USD3.35. One dollar of that was from fuel, because our stage length increased 3%, thereby increasing our gallons per passenger from just below 18 to 18.2 gallons. The non-fuel cost per passenger increased USD2.35. And that was driven by higher maintenance cost from heavy C-checks and one-time adjustments for inventory values.”

The decline in revenues was where the company took its biggest hit, Gallagher reported. “A USD10 drop in that quarter represented 75% of the overall USD13 decrease in our profit per passenger for the quarter,” he said. “Looking forward, it will be difficult for us to top our 1Q2009 results because of the USD1.46 in fuel cost that we had during that time. However, it appears first quarter scheduled service average fare and TRASM in totals should exceed 2009's Q1 totals of USD109 and USD10.83 or USD10.83, respectively.”

Still, the company is targeting 20%+ operating margin for 2010. “It's an ambitious goal, but one we believe is attainable,” he concluded. “We are focused on maintaining this level of operating profitability.”

Gallagher reported that since 2007, the company’s per-passenger costs ex fuel has been just over USD50 which has remained steady, rising only eighty cents in 2008 and 2009, despite high maintenance cost and a one-time adjustment of inventory.

Fuel was USD1.76 cost per gallon in 2009 which generated a USD31 fuel cost per passenger, contributing to its 2009 operating margin. He cautioned that those fuel prices are not expected to continue since expectations for 2010 are closer to USD80 per barrel which would result in a USD40 per passenger for fuel in our system.

After dropping precipitously since 2Q2008, and hitting a low in 1Q2009, fuel is creeping up again to about 39% of total costs. 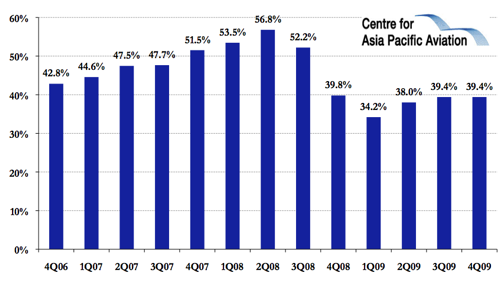 Allegiant has no fuel hedging because (as Gallagher said last year when others were taking huge losses on fuel hedging), they don’t understand it.

Even so, the company is expecting increasing unit revenues this year, continuing a recovery that began in the third quarter. The selling fare, for 4Q2009 was boosted further with an increase in ancillary revenue per passengers from USD29.42 in 2008 to USD33.07 this year, up 14%.

Allegiant now serves 136 routes and 69 cities, 58 of which are small cities. It broke out of its small-city model this year adding LAX to the mix. One eight of its routes have direct competition. Allegiant Air started nine new routes in the fourth quarter, including five routes to Phoenix-Mesa, two to Orlando, and one each to Tampa Bay/St Petersburg and Ft Lauderdale. It will add new service shortly.

“The gross amount of the third-party sales leading to this USD19.7 million of net income was USD73 million including hotel, transportation and attraction sales,” said Gallagher, who said future emphasis will be on third-party products by upgrades hardware and database platforms and set for installation over the coming quarters", he said.

The vast majority of third-party product sales are in Las Vegas, so an important goal for this year is stepping up such sales at other points, such as Los Angeles. Gross ancillary revenues were down 4% in the fourth quarter. Gallagher said pricing is so far down, especially on room rates, which is not expected to improve any time soon, given the overcapacity in hotels in Las Vegas.

4Q2009 ancillary revenues is “going to be indicative of a quarter or two more,” Gallagher told analysts. “[Las Vegas] is recovering, but not at the pace I think airline industry is recovering.”  For that reason, Allegiant will focus on selling third-party products, such as hotels and attractions at other destinations such as Los Angeles and Orlando. 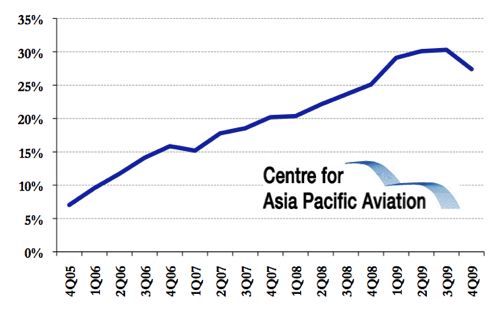 Excluding air-traffic liability, cash increased slightly to USD140.9 million from USD138.1 million at the end of 3Q2009. This performance was despite USD9.9 million in pre-paid hotel rooms as part of a deal cut with a key LAS hotelier, USD9 billion in principal repayments of aircraft mortgage debt and USD6 million in cap ex.

Debt at year end was USD45.8 million, a decline of USD54.8 million at the end of 3Q2009 and USD64.7 million at year end of 2008. President and CFO Andrew Levy said year-end 2010 debt would decline a further USD23 million to about 22 million. This assumes financing growth through cash flow. Debt-to-equity ratio is now at 33% and interest coverage is at 19 times, said Levy, adding Allegiant retains an industry leading return on equity of about 25%.

Levy said Allegiant would be conservative in 1Q2010 capacity growth owing to unit revenue declines last summer during planning were so dramatic and fuel prices were rising at the same time. Consequently first quarter will go negative, following the same trend that the company experienced in December.

It is expecting to announce another aircraft base outside its leisure routes and similar to what it did in 2008 with Bellingham, WA. Levy called it a cost-effective scheduling option.

Despite the fact that it won’t operate its first flight out of Orlando International until 01-Feb-2010, after shifting ten points to the main airport from its current operation at Orlando Sanford, the initial response is “thrilling,” said Levy, who said all the flights to those 10 markets will complete the shift by mid-March. “Bookings have been well ahead of our expectations.”

The company is expecting 13 additional MD-80s this year having recently acquired them from SAS. However, all 13 will not go into service until 2011. At year-end, it had 46 aircraft with another two expected to be added during the first quarter and another by the summer when it will have a total of 50 with the retirement of an MD-87. Its original guidance showed 52 aircraft by the end of this year but that will be adjusted if the improving trends continue. “We will again be biased to finish the year with more than 52 aircraft in service.”

The aircraft will be delivered through 3Q2010, according to Levy, adding that it gives the company added flexibility to put them into service if the market calls for it. However, he discounted having more than 50 aircraft in service this summer.