One of the most interesting market developments during the pandemic is the unique partnerships that have emerged. The latest – a proposed joint venture between Allegiant Air and Viva Aerobus – is arguably the most intriguing and demonstrates how the ULCC model is evolving.

In essence, the two ultra-low cost operators are combining to accelerate growth in one of the busiest markets in the world. And in Allegiant’s case, the proposal solidifies a strategy for international expansion.

Of course, obtaining regulatory approval is the next step, but the would-be partners believe they have a compelling case for injecting fresh ultra-low cost competition into the Mexico-US transborder market.

After years of nearly launching service to Mexico, Allegiant Air has opted to invest USD50 million in, and form a joint venture with, the Mexican ULCC Viva Aerobus.

Essentially, the two airlines believe that coordinating on pricing and scheduling in their combined operations will provide advantages they would not otherwise have.

In their joint application to the US Department of Transportation (DoT), Allegiant and Viva Aerobus explained that Viva had faced challenges in some of its US markets due to lack of brand awareness, and as result has had to exit some of its transborder routes.

“Viva, by partnering with Allegiant, seeks to avail itself of Allegiant’s distribution network and point-of-sale process within the United States, thereby broadening Viva’s customer base – presently skewed heavily toward Mexico-originating traffic – and stimulating new traffic from the United States to Mexico”, the partners explained.

New alliance-originated US passengers will help Viva launch routes in 2023 that it otherwise would not attempt until 2026 or later, the applicants said, including four routes from Guadalajara, one from Culiacán and one from Bajío.

There are broadly 239 routes between Allegiant airports and leisure destinations in Mexico that currently have no nonstop service, and the two airlines explained that they would provide service on a significant number of those routes.

The airlines also concluded that there are approximately another 25 existing US-Mexico city pairs from cities served by Allegiant that do not have ULCC service to any Mexican leisure destinations.

Allegiant and Viva have concluded that their potential JV would achieve a combined share of 11% of the US-Mexico market in 2026, based on seat offerings.

Data from CAPA and OAG show that as of late Nov-2021, American had the highest seat share from Mexico to the US, at 22%, followed by United at 18%. Volaris held a 13% share, followed by Delta with a 10% share and Aeromexico’s 7% share. Combined, the existing joint venture partners Delta and Aeromexico have a 17% share.

In their application the airlines explained that their projected seat share “would not afford Allegiant and Viva the ability to raise prices or restrict capacity for air services between the U.S. and Mexico”.

“Rather, the alliance’s market penetration would depend heavily on its ULCC pricing, and the alliance would serve as a constraint on the larger airlines, forcing them to compete more vigorously on price as has occurred domestically.”

The Mexico-US transborder market was also one of the fastest to recover, given that Mexico never really shut down its borders and did not institute onerous travel restrictions. And seats deployed between the two countries in late Dec-2021 will trend above 2019 levels.

Of course, that is subject to change, given the emergence of the new omicron variant of COVID-19, but Allegiant and Viva Aerobus are positioning themselves to be competitive for the long term. 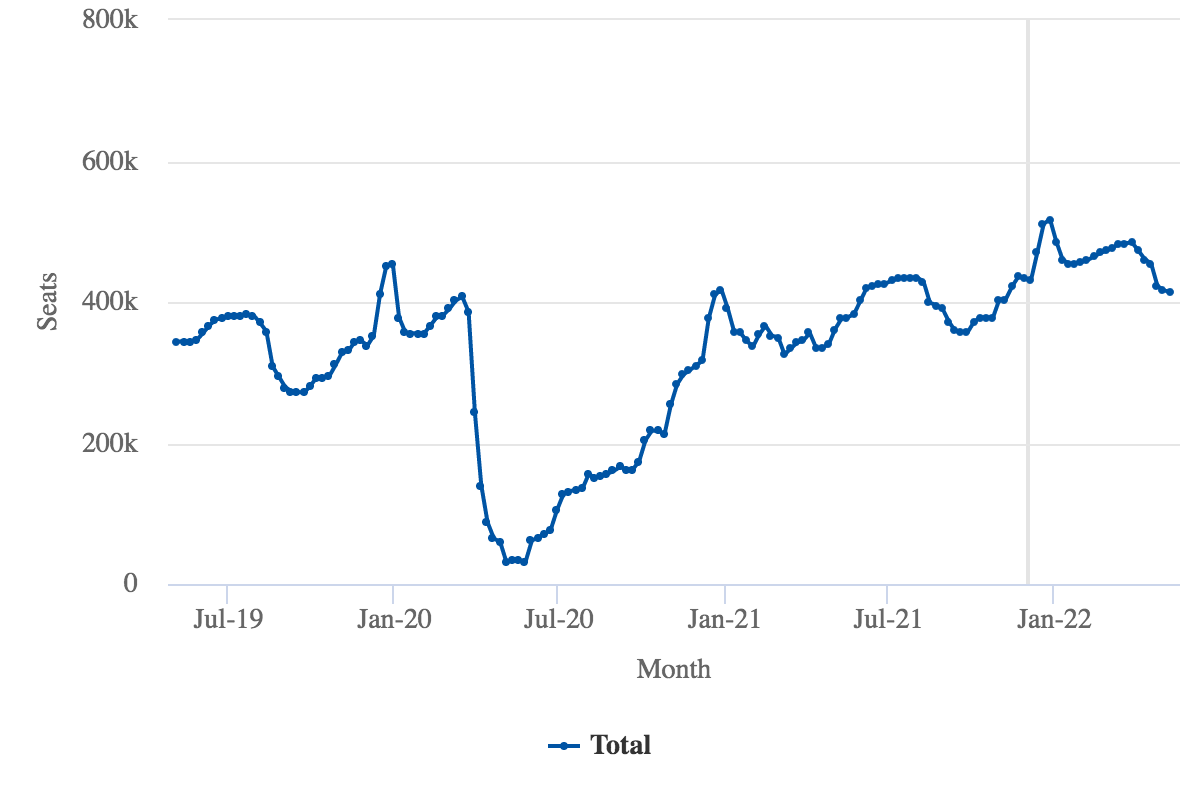 Can Allegiant and Viva preserve their cost advantage in a JV?

A key question arising from this one-of-a-kind tie-up between two ultra-low cost operators is how it will affect Allegiant and Viva Aerobus’ respective cost bases.

In their application for antitrust approval the airlines explained that Allegiant has publicly expressed interest in entering the Mexican market numerous times. But instead it had opted to focus on domestic opportunities in light of operational obstacles that would have required a multi-million dollar investment to add services internationally, including developing a Spanish speaking website, an IT system overhaul and learning how to market effectively in a foreign country.

But an immunised JV with Viva Aerobus would substantially reduce those burdens for both airlines, the potential partners said.

Allegiant’s proposed investment, which also includes a seat for its CEO Maurice Gallagher on Viva Aerobus’ board, shows that the two airlines believe a JV between two ULCCs is possible without compromising the pillars of the business model.

Allegiant is also investing in an airline that has taken advantage of growth opportunities in the pandemic, without compromising its performance in certain financial metrics. In 3Q2021 Viva Aerobus posted an EBITDAR margin of 44%, compared with 38% in the same period of 2019.

The proposed JV is a landmark partnership for the ULCC model

If Allegiant and Viva Aerobus gain approval for their proposed joint venture it will be arguably a milestone in the evolution of ultra-low cost airlines, which have historically shied away from any changes in their business that could drive up costs.

But clearly these airlines believe they can protect their cost advantages while also partnering to broaden their reach in a highly competitive international market.