Allegiant Air is making some subtle network shifts as consolidation in the US airline industry has made operating from mid-size hubs more viable for the airline. During 2014 it has rapidly built up Cincinnati, as Delta has pulled down service at its smaller hub to maximise its network utility.

During 2015 Allegiant is introducing flights from other mid-size markets as it concludes those larger regions may not require as much deep discounting as some smaller markets within its network. The airline is also using its Airbus narrowbodies to increase its network breadth by placing those jets in markets unviable for its MD-80s, which still comprise the majority of its fleet.

Allegiant’s moves show that even as the US market may appear to have reached a steady state of maturity, market dynamics within that framework are changing, albeit at less dramatic levels.

During the last couple of years Allegiant has added a layer to its network utility, introducing service from some medium sized US markets to the numerous leisure destinations it serves throughout the US. Typically, Allegiant links its large leisure destinations such as Las Vegas and Orlando to smaller cities like Casper, Wyoming or Boise, Idaho. But more recently the airline has added more medium sized markets to its network roster including Austin, Texas and Columbus, Ohio.

Cincinnati is the most obvious example of Allegiant’s moves into larger markets. It launched service from the airport in early 2014, and by the summer 2015 time period projects operating 34 weekly departures from the airport.

Cincinnati reflects some of the changes that have taken place as the US market place has moulded into three large global network airlines, one large domestic airline, two to three hybrid airlines and the newer breed of ultra low-cost airlines.

The large global network airlines have essentially consolidated all their capacity at their largest hubs, diminishing the roles of smaller hubs including Cincinnati, Cleveland and Memphis.

Allegiant estimates that between 2007 and 2014 seats in medium sized US hubs declined by nearly 21%. That was during the peak of consolidation among large network airlines, which resulted in diminished service at secondary hubs that in some ways were redundant in the larger networks formed by Delta, United and American.

The company believes that it can serve medium sized markets on routes that have higher fares with less than daily service, and stimulate traffic. It estimates that there are roughly 40 US medium sized cities, and Allegiant only serves a fraction of those markets.

In late 2014 Allegiant unveiled five new cities to debut in Feb/Mar-2015 – Indianapolis, Pittsburgh, Jacksonville, Omaha and Richmond. Pittsburgh has endured service reductions throughout the last few years as US Airways through its previous merger with America West Airlines pulled down flights at the legacy US Airways hub.

Of those five new cities, Southwest is the leading airline in three of the markets – it holds a 29% seat share in Pittsburgh, a 33% share in Indianapolis and a 32% share in Omaha. Delta is the leading airline measured by seat deployment in Jacksonville and Richmond, with seat shares of 29% and 30%, respectively. (All statistics are based on data from CAPA and OAG for the week of 28-Dec-2014 to 4-Jan-2015.)

From Jacksonville, Allegiant is serving Cincinnati and Pittsburgh. Allegiant has concluded that Jacksonville is not as large as some of the other leisure markets within Florida, but it has enough traffic for Allegiant’s type of service, which is typically low frequency with fewer than four weekly flights. Allegiant also plans to add flights from St Petersburg to new markets in Richmond and Omaha.

Allegiant is not taking direct aim at Southwest since the two airlines are not serving the same airports. Allegiant is also offering four weekly flights or less in all its new markets, which is not a huge threat to Southwest’s more frequent schedule.

In 4Q2013 Allegiant added two uncharacteristic markets – Las Vegas-Austin and Los Angeles-Honolulu. During Nov-2014 the company explained that it determined there would be a lot of opportunity for stimulation in Las Vegas to Austin, and based on nine months of data collected Allegiant  concluded that Southwest (Allegiant’s lone competitor on the route) has transported more passengers year-on-year at essentially the same fare. Allegiant believes the passengers it has flown on the route have been stimulatory and its presence in the market has not really had an effect on Southwest.

But the fare differential is stark and even though Southwest passengers tend to be loyal, leakage both in passengers and pricing is likely. 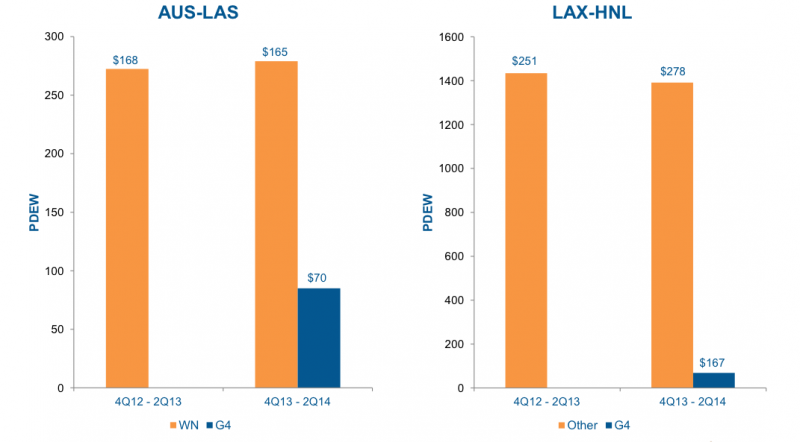 Allegiant concludes its approach in those larger markets is a little different from other low-cost airlines that offer two daily flights during off peak times that are “starting to break in on business traffic”. The company is only serving peak days targeting spill traffic that can be served at a price point where Allegiant cannot turn a profit.

It may be using that same logic on its new route from Indianapolis to Las Vegas, where it is competing with Southwest. The route is reflective of Allegiant’s network shift, linking a medium size market to a large leisure destination, and Allegiant may have concluded it can stimulate traffic without creating pressure for Southwest.

Data from CAPA and OAG show that United, American, Hawaiian and Delta all operate flights from Los Angeles to Honolulu. But Allegiant estimates in the year it has operated on the route fares have risen 11% as other airlines have “yielded up”, creating some stimulation opportunities for Allegiant at the proper capacity levels.

It does not appear that Allegiant is making a big push into those types of markets; but it is launching service between Orlando Sanford and Austin in 2015. Both JetBlue and Southwest operate flights from Orlando International to Austin, which is also larger than Allegiant’s typical pattern of linking small markets to large leisure destinations.

Allegiant during the last couple of years has also started to add Airbus narrowbodies to its fleet, and by YE2015 projects operating 19 of the jets, up from 11 at YE2014.

Absent from Allegiant’s commentary are its aspirations to serve Mexico, something that seems to be falling further down the list of priorities for the airline. The US domestic market is perhaps a safer gamble for Allegiant, which has had to rework its thinking about Hawaii after learning some difficult lessons about dynamics of operating service from small US domestic markets to the Hawaiian islands.

Even as it believes medium sized markets create some revenue upside, perhaps Allegiant will need to be careful in executing its strategy on those routes to ensure it stays off the radar of large legacy airlines. It seems as if those larger airlines are taking more notice of ULCCs, and may be devising individual strategies of competing with those airlines. For the moment Allegiant’s niche business model does not seem likely to provoke a response from the big four, and its best defence is remaining below their radar. 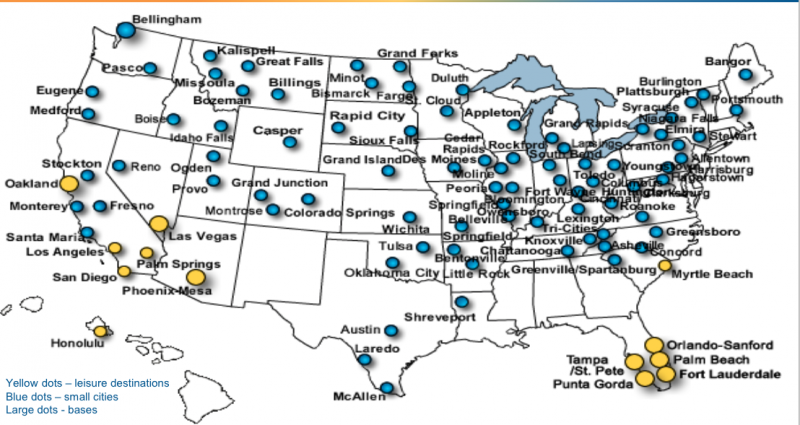