Allegiant Air’s strong top-line financial performance in FY2013 was belied by cost creep that is continuing into 2014 driven by maintenance expense and investments in yet-to-be revealed non-airline initiatives.

With Allegiant’s guidance of unit cost increases for FY2014, no US airline is escaping some level of cost escalation during the year. Similar to sentiments expressed by other carriers, Allegiant concludes it is making the necessary investments now to ensure a profitable future.

Even as Allegiant’s core business model – transporting cost-conscious travellers from small US markets to large leisure destinations – has essentially remained intact during the past couple of years, the carrier has also undertaken initiatives that are creating challenges in its cost performance in FY2014. While the company’s financial fundamentals still remain strong, wildcards in its cost structure remain, including negotiating labour deals amid increasing tension between management and employees.

Allegiant’s 17% increase in FY2013 net income to USD92 million year-on-year was overshadowed by a 5% rise in unit costs at the ultra low-cost carrier. Despite the increase, its USD5.60 unit costs excluding fuel remains the lowest among US carriers.

Some of Allegiant’s cost pressure in FY2013 is attributable to factors beyond the airline’s control. A US government shutdown that shuttered the FAA resulted in delays by Allegiant in placing Airbus A320s into service, which created temporary increases in crew costs.

The cost spike Allegiant expects during 1Q2014 results from maintenance expense and the lingering effects of delays to adding the A320 narrowbodies to its operating certificate, and start-up expense in two non-airline initiatives the company has attempted to remain tight-lipped about. A recent article in the Las Vegas Review Journal stated the company reportedly signed a deal with rental car company Enterprise to sell vehicles from the car company’s fleet.

Allegiant publicly has characterised the new ventures as small start-ups, and cautioned that investors would not likely see any material impact in the overall results from the initiatives. For now it seems Allegiant is incurring the start-up cost in 2014, with the benefits from the secret businesses not occurring until 2015 and beyond.

As it braces for cost pressure Allegiant also estimates capacity growth of 10% to 14% in 1Q2014 and 8% to 12% in 2Q2014 as its passenger unit revenues are expected to be flat to down 2% in 1Q2014 and total unit revenues are expected to fall 2% to 4%. Usually capacity growth can ease cost inflation given costs are spread out over more ASMs, but supply growth is not denting Allegiant’s maintenance cost pressure or the uptick in spend on new non-airline business ventures. 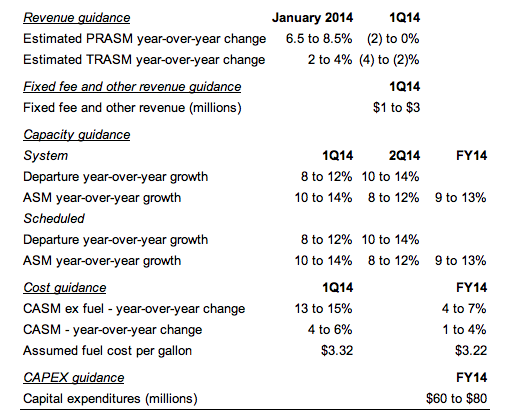 Allegiant believes benefits from technology spend should emerge in 2014

Allegiant during the past couple of years has opted to increase its technological spend, including on its maintenance technology. Carrier CEO Maurice Gallagher remarked in that area Allegiant has not discovered any third party product that matches the technological maintenance programme it has created on its own.

The company has also had a cash outlay during the last 18 to 24 months to upgrade other internal systems, that Mr Gallagher believes should “roll out nicely in 2014”.  He predicts excellent returns on those investments and other spend on automation as the development phase of those projects comes to an end.

It is easy for any company to promise solid returns after expending ample cash to upgrade systems in order to remain competitive or be on the cutting edge in the future. For the moment there is little reason to doubt Allegiant’s conclusion that its investments will pay off as the company continues to deliver top-line profits, double digit operating margins and delivers dividends to shareholders.

Allegiant follows a still tenuous foray into Hawaii in 2012 with a new fleet of Boeing 757s with an aim to launch service to Mexico in 2014 while it still absorbs adding Airbus aircraft to its fleet of existing MD-80 jets. The stakes are higher for Allegiant to successfully execute its business model in the transborder Mexican market after its less than successful experiment with trans-Pacific flights to Hawaii requires a win or two to inspire new confidence.

Those initiatives alone are a lot to absorb but Allegiant also faces continued labour strife in 2014. Its pilots, flight attendants and dispatchers are now all unionised, and pilots have filed suit against the carrier alleging work rule violations. Contract negotiations with both pilots and flight attendants are progressing slowly, and it seems overall labour relations at Allegiant are becoming more tense.

Underneath Allegiant’s continued favourable financial results are cracks in areas where it has historically had an absolute advantage – namely costs. It is hard to do an apples-to-apples comparison of Allegiant against other US carriers since its business model is totally niche (low frequency service from small markets to large leisure destinations).

Allegiant’s explanation that maintenance is reaching more normalised levels is a concern given its fleet is still largely comprised of older MD-80s that will continue to rotate in and out of heavy maintenance during the years to come.

Behind the scenes Allegiant is obviously working to get its cost inflation back to historical levels, but in the near term it seems the company is stuck in a certain type of limbo that other US carriers find themselves in – waiting for returns to kick in on certain investments as costs continue to rise.