Allegiant: a successful niche player with wider lessons for the world's airline industry

Allegiant's business model seems to fly in the face of conventional wisdom. A fleet of old, fuel-inefficient aircraft, flying with low frequencies and at low daily utilisation rates in markets with a high degree of seasonality. Yet the ultra-LCC is consistently profitable and generates free cash flow (operating cash flow in excess of capital expenditure), unlike most of the airline industry.

Allegiant's Vice President for Fleet and Corporate Finance told CAPA's Airline Fleet and Finance Summit in Mar-2014 that his airline was "built to be different". Of course, no business proceeds entirely smoothly and Allegiant faces some challenges, including labour relations issues and successfully taking its business model outside the contiguous United States.

Nevertheless, its return on capital employed is consistently the envy of most carriers. How does Allegiant achieve its strong financial results and what can the rest of the airline industry learn from its approach? 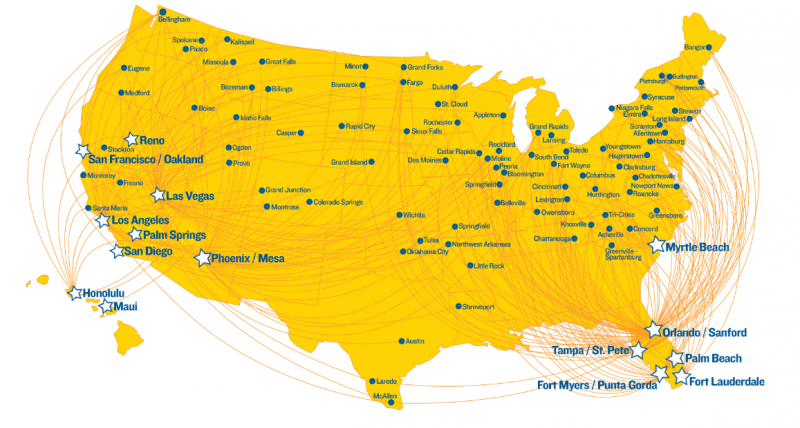 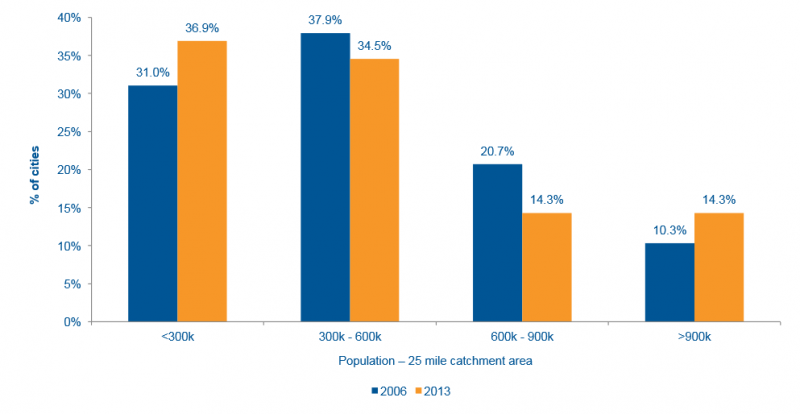 This is an important starting point in understanding Allegiant's business model: its target market is leisure passengers in small cities across the USA. Much of the rest of the Allegiant approach flows from this. At the same time, this is, almost by definition, a niche market and therefore one on which the industry as a whole could not build a sustainable strategy.

Leisure passengers in small cities have characteristics that set them apart from the target markets of most airlines. First, they are more motivated by price than by schedule. Second, they like to take weekend breaks flying to a leisure destination towards the end of the week and back home at the beginning of the week. Third, they form a series of small markets that would not support a high frequency schedule; nor would they support a large number of airlines. Fourth, their pattern of travel has significant seasonal variations. 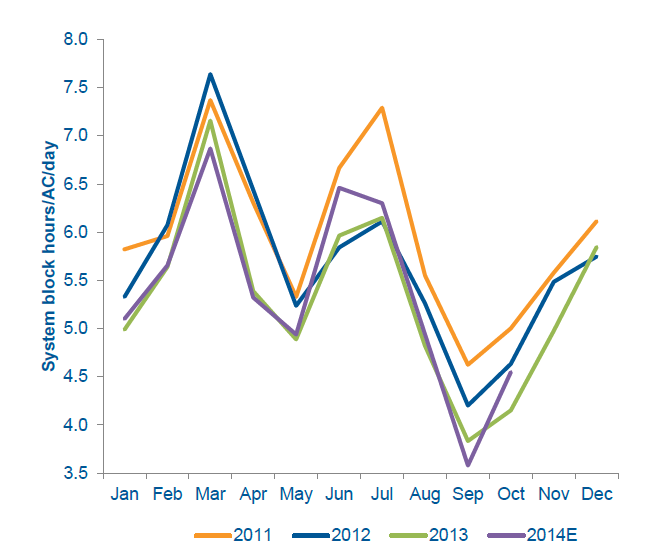 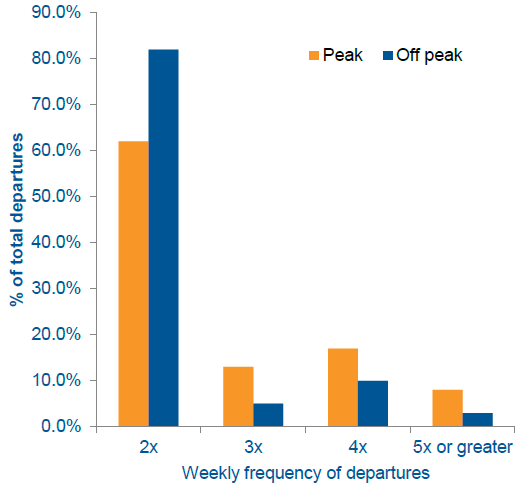 These characteristics present Allegiant with a series of challenges. It must present a schedule that adapts capacity to demand by day of the week and by season, flying only when demand can drive high load factors. It must have low costs, but also a cost structure that is variable rather than loaded with fixed costs. This means it can be profitable with low frequencies and low utilisation. 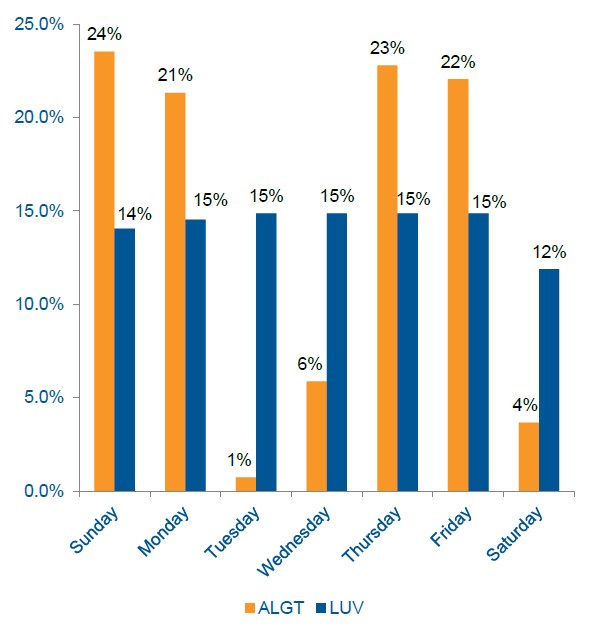 Allegiant has a very low cost base

Allegiant has managed to construct a cost base to give it one of the lowest levels of unit cost in the US industry, in spite of having an average daily utilisation rate of only 5.5 hours in 2013 (down from 5.7 hours in 2012). This compares with a range of around 11 to 13 hours for other US LCCs and an average of close to nine hours for the global airline industry. With such low utilisation rates, it is essential to keep fixed costs to a minimum, so that, as far as possible, costs are only incurred when flights are in operation and revenues are also being generated. 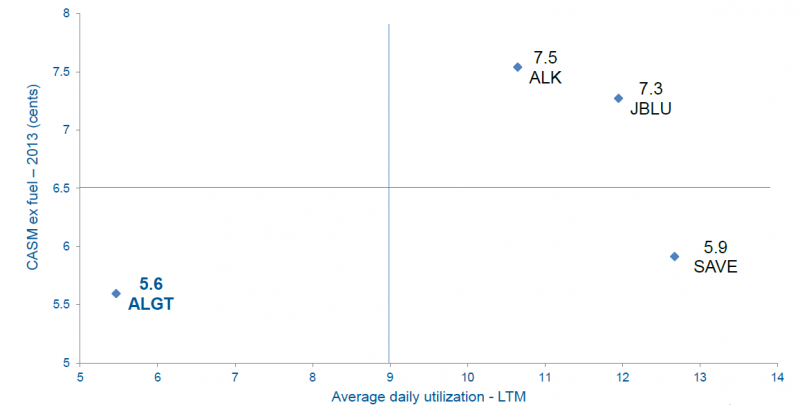 According to the CAPA Fleet Database, Allegiant's fleet at 9-Apr-2014 consists of 53 MD-80 family aircraft, six Boeing 757s and 10 Airbus A320 family aircraft. The average age of the MD-80s is 24 years, the 757s 21 years and the A320s almost 13 years, with an overall average age for the whole fleet of 22 years. Its strategy of acquiring old aircraft was aimed at keeping its ownership costs relatively low.

Other costs associated with older aircraft, such as fuel and maintenance, may be higher for Allegiant than it would incur if new aircraft were used, but these are variable costs that are only incurred in proportion to the use of the asset (maintenance is actually a combination of fixed and variable costs).

The introduction of (relatively) younger Airbus aircraft in 2013, and the plan to grow the Airbus fleet to 10 A319s and nine A320s by 2015, should help to improve Allegiant's fuel burn efficiency. The Airbus narrowbodies consume approximately 20% less fuel per block hour than the MD-80s, according to Allegiant. On the flip side, the addition of Airbus aircraft will add to the complexity of Allegiant's operations and reduce the flexibility of its flight crew to operate across the entire fleet.

This follows the introduction of Boeing 757s into Allegiant's fleet in 2011/2012 to launch services to Hawaii. These services experienced difficulties in achieving sufficient load factors and Allegiant is now cautiously looking at entering the Mexican market.

Interestingly, Allegiant and Southwest also have a similar level of maintenance cost per passenger, around USD10, with Allegiant's higher load factor and higher number of seats per aircraft offsetting the higher maintenance cost per aircraft. In addition, the two have a similar level of ownership cost per passenger (USD11), taken as depreciation plus operating lease payments. This seems to contradict a common perception of the Allegiant business model, namely that its aircraft policy provides a cost advantage. 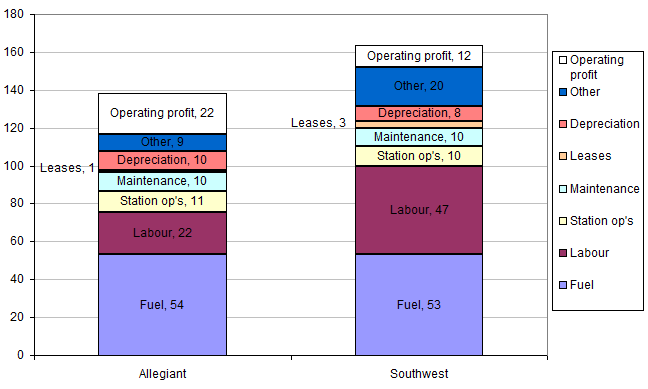 The biggest cost after fuel expenses is labour and here, too, Allegiant has structured its employee contracts to maximise the proportion of labour costs that are variable. Employees are guaranteed a minimum monthly payment, but then their compensation is variable in proportion to hours worked.

Comparison with Southwest shows that labour is the most significant source of Allegiant's cost advantage. In 2013, Allegiant's labour force cost it USD22 per passenger, while Southwest's cost USD47 per passenger.

This comes both from lower average employee costs per employee (USD81,600 for Allegiant and USD111,000 for Southwest) and higher productivity in terms of passengers per employee (3,706 and 2,384 respectively). This seems to validate Allegiant's greater focus on paying staff only for the hours they work, rather than merely for being on the payroll.

As previous CAPA analysis has pointed out, labour relations at Allegiant may be facing some challenges currently and it will be important that management assures the continuation of this key source of cost advantage.

Allegiant also has an advantage in other costs, which come to USD9 per passenger, compared with USD20 for Southwest. This probably reflects a generally lean organisation, with minimal overhead and also low distribution costs as a result of using direct channels.

Overall, then, Allegiant's cost advantage comes from a more productive and lower wage labour force, with a contribution from low overheads and selling costs. Aircraft-related costs do not appear to be important in its successful construction of a low cost base.

Given that the principal asset for both is its fleet of aircraft, this demonstrates Allegiant's superiority in generating revenues from each dollar of fleet value. (Its superiority is even greater than stated by these two figures, since around one quarter of Southwest's fleet are on operating leases and so their value is not included on the balance sheet).

Allegiant's strong operating margin is the result of a combination of cost and revenue advantages as noted above. Looking at its business model more simply, its high margins probably owe much to a lack of competition in its chosen markets. It has no competitors on 90% of its routes.

Essentially, its business model works by generating demand with low fares and this requires it to have a low cost base. However, as a monopoly supplier on most of its routes, once it has constructed a suitably low cost base, it can charge whatever fare it likes as long as there is demand. Rising average revenue per passenger in recent years also seems to confirm Allegiant's pricing power. 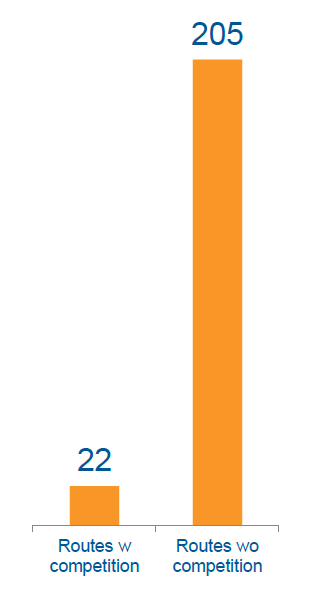 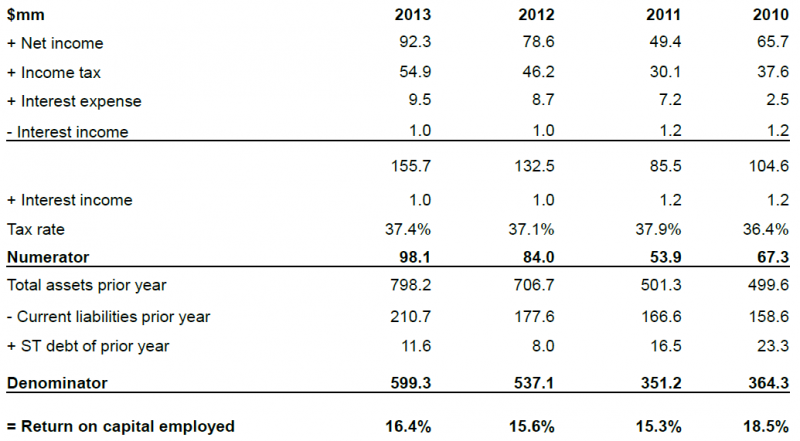 While brand new aircraft are undoubtedly more fuel efficient and would lead to even lower costs and higher margins, they would be expensive to acquire and would lower Allegiant's asset turn, potentially diluting return on capital employed. The recent glut of orders for new aircraft in the airline industry is evidence of a sector that is seeking to improve margins, but airlines should keep in mind that a healthy return on capital also requires a disciplined approach to expansion of the capital base.

Unlike the airline industry as a whole, Allegiant also generates strong cash flow, more than it spends on capital expenditure, enabling it to make regular cash returns to its shareholders (both in the form of share buy backs and dividends). Acquiring older aircraft also helps to minimise cash outflow on capital expenditure. 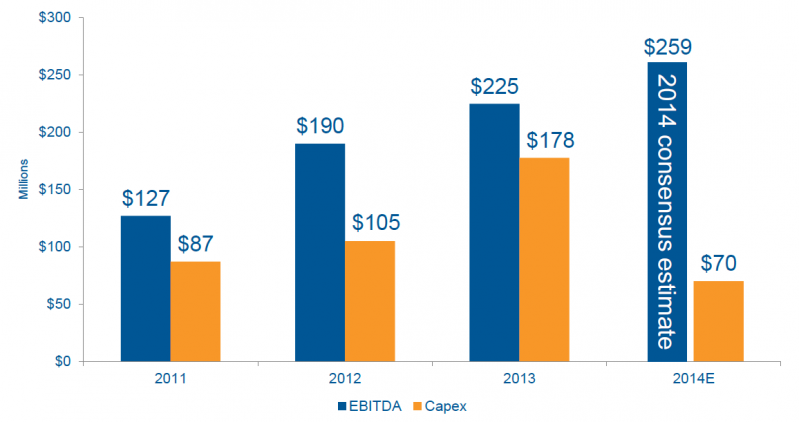 Cost and capital discipline: the lesson for the airline industry

There can be no doubt that Allegiant has developed a successful business model, built on niche markets with little competition, low costs (mainly labour-related) and a prudent approach to capital investment. While its business model could not be replicated in detail by the majority of airlines, the industry as a whole could certainly benefit from noting its focus on a disciplined approach to both costs and capital.