Its quarterly profit may only be USD5.3 million but Alaska Air Group (including Alaska Airlines and Horizon Air) outpaced its peers just by being profitable. This was especially significant given the USD19.2 million loss in 1Q2009 and the USD27.1 million headwinds resulting from additional fuel costs. Indeed, it is only the third time the company has posted a first quarter adjusted profit in 11 years — and the best since 1999.

"Producing a profit in our seasonally weakest period is particularly noteworthy," said Chair and CEO Bill Ayer. "Given the seasonality of our business it is particularly encouraging to start the year with a profit we can build on rather than spending the year making up for a loss. Our results were driven by higher load factors, improving pricing trends and first-bag-fee revenue. Selective schedule reductions coupled with entry into new markets also contributed to our strong performance and provide a foundation for continued improvement.”

Mr Ayer pointed out that this was the best first quarter since 1999, adding the last time it reported a profitable first quarter was in 2006 when it made USD3 million and before that it was 1999, when it earned USD20 million. 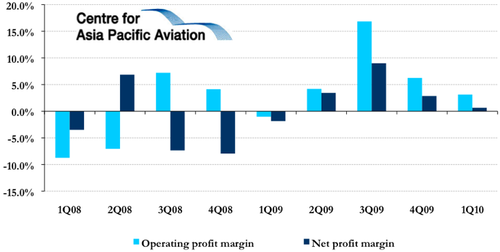 Focus, he said, remained on the airline's restructuring which has been underway for a decade, especially in building new network and ancillary revenue as well as redeploying capacity to new, more profitable markets. To that end he announced new service to Hawaii, between San Diego, Alaska's strongest non-hub market, and Maui. Mr Ayer also noted that while the fleet has remained flat the carrier has entered 26 new markets in the last two years.

The airline raised its expected payout for its employee Performance Benefit Pay from USD50 million, forecast at the end of the fourth quarter. Johnson indicated that the forecast for pre-tax profits exceeds the goal set by the Board of Directors, raising the expected pay out to USD72 million. “While that will have negative impacts on our CASM, it bodes well for the bottom line which is really what counts,” he said.

Vice President Finance and Controller Brandon Pedersen reported on Alaska Airlines saying that mainline passenger revenue was up USD47 million or 9% owing to increased passenger unit revenues of 8.3% as well as a five point improvement in load factor and a small improvement in yield.

He reported that PRASM was up 3% in January, 13% in February and 10% in March. “Our 8.3% PRASM increase compares favorably with the domestic industry increase of 7.5%,” he said. “If you compare this quarter with the first quarter of 2008 our unit revenues improved 6% versus a decline of 3% for the industry.”

Pedeson also said that every one of its regions saw unit revenue growth with particular strength in Southern California, Arizona, Nevada and transcon. Johnson explained that while Alaska was pulling back capacity in the Bay Area and Southern California, so, too, is everyone else. “That good for the load factor and RASM,” he said. “We see opportunity as a smaller airline to move those planes to Atlanta, Houston and Hawaii which is all new revenue to the company.”

He pointed out that part of carrier restructuring called for reducing the seasonality of its network by identifying routes it could fly profitably in the fall and winter and managing frequency for higher load factor to higher levels during those shoulder months.

Pointing out that Alaska had the lowest fares to Hawaii, Pederson said its new Portland-Kona service brings to three the Hawaii points served from Portland. San Diego is fourth California city with Alaska’s Hawaii service. Horizon is also providing San Jose, CA-LAX service to increase connection opportunities over Los Angeles. The carrier also scheduled seasonal service to Puerto Vallarta in the fall to further reduce the carrier’s seasonality. For the full year mainline ASMs are expected to be up 4-5% more than the 2% given in its initial guidance. However, total departures will be up less than 1% for the year and will still be 10% lower than in 2008.

April advance booked load factor was up 3.5 points which will be followed by 3% hikes in both May and June. Yield trends were also following a positive upward swing as business travelers return and increase in revenue in middle fare classes and improve revenues in first.

Horizon Air: loss of USD1.6 million for the quarter

Horizon Air President Jeff Pinneo briefed analysts on its results saying first quarter benefited from higher brand yield and load factors along with the absence of Q200 transition costs now that aircraft is out of the fleet.

He reported that Seattle, Portland, Spokane and Boise represented 31% of the carriers branded operations which saw a 6% year on year increase in revenues, an 18% increase in PRASM on a 10% trim in capacity. In addition, he said, frequency reduction on routes improved revenue.

Those results, however, could not forestall a quarterly loss of USD1.6 million, which narrowed the company’s losses from the USD5.2 million experienced in the first quarter of 2009.

Horizon expects to hold capacity growth to 0-1% and CASM is expecte to decline 2-3% ex fuel for the full year.

Merger: too focused on its restructuring to consider it - but enthusiastic on codeshares

In response to the inevitable question about the possibility of a merger, Mr Ayer quickly said the company has been too focused on its restructuring to consider it. “We are not where we want to be yet so we do not spend a lot of time on it,” he said, adding the question is usually about Alaska being acquired. “We view the question on what is the best path for our shareholders. The improvements and optimisation over the long term is, we believe, remaining independent with profitable growth. We think that’s the way to go. We are not at our ROIC yet but we are getting there; we are pleased with the results.”

As for its codesharing partnerships with American and Delta, the company was enthusiastic saying they offer not only increasing connection opportunities over Los Angeles but also beyond connections at Chicago, Atlanta, Dallas and Minneapolis which have substantially increased the opportunities for passengers. They have had a positive impact on load factors.

Mr Ayer noted it was often more convenient for passengers and pointed to Delta’s new Seattle service to Beijing and Osaka, which he indicated was part of the codeshare and is expected to do very well. Mr Johnson also reported that there is plenty of room in aircraft utilisation to add capacity rather than increasing the fleet.

Driving ancillaries - up to USD58.5 million

Its “other” revenue rose to USD58.5 million from USD38.9 million. The airline announced changes to its fees along with its quarterly results. It retains its philosophy that fees should imply additional service so it now guarantees that checked baggage will arrive at the carousel within 20 minutes rather than 25. The “reward” for late baggage is either 2,000 Alaska miles or USD20 discount on a future flight.

Alaska and Horizon will charge USD20 for each of a passenger's first three checked bags. This represents a USD5 increase for the first checked bag, a $5 decrease for the second, and a $30 decrease for the third. Passengers checking two bags will continue to pay the same amount as they do today, while passengers checking three bags will pay $30 less. In addition, the airline will cut the cost of the fourth through 10th checked bag, from $100 per bag to $50. The restructuring of its checked baggage fees is expected to yield USD20 million and drive per passenger ancillary revenue up to USD11 up from the USD4 a few years ago.

At the same time it lowered unaccompanied fees for minors aged five to 12. The fee is optional for those 13-17. Customers will pay a USD25 fee per child for direct flights and USD50 per child for connecting flights within the Alaska/Horizon network. This is a reduction from the current USD75 fee. The fees are waived for children with Mileage Plan MVP or MVP Gold status. The aggregate yield from these changes to ancillary revenues is expected to be USD30 million annually, according to Mr Pederson.

Fees to change flights plans within six hours of departure will be USD25 for a same-day confirmed fee, space available, eliminating the free stand-by option. Those wishing to change their flight outside of that six-hour window must pay the difference in fare plus any applicable change fee.

Finally, effective 12-May-2010, the company eliminates the option to hold reservations for free without paying when booking directly on Alaska or Horizon. The airlines will, however, offer customers one free change or a full refund within 24 hours of purchase on all tickets. A 24-hour hold will continue to be available for reservations made through EasyBiz (the airlines' corporate online booking tool), Alaska Airlines Vacations and groups. 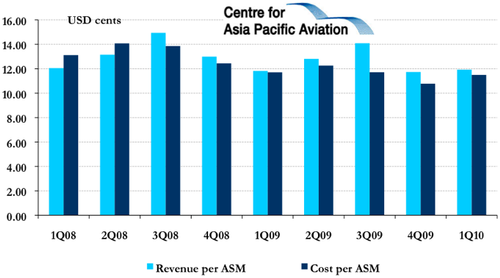 All in, a solid, albeit modest performance. But compared with its peers, one to be proud of.