Even after achieving investment grade status in 2014 – becoming only the second US airline to reach that milestone – Alaska Air Group’s valuation still trails its competitors, many of which do not have the financial stability that Alaska has enjoyed for years.

It appears current investor trepidation centres on Alaska’s ultimate fate after Delta has aggressively built up Seattle during the last couple of years, adding significant competitive capacity in Alaska’s largest hub. Despite Alaska’s confidence that it will survive and thrive after Delta’s encroachment, investors seem to be taking a wait-and-see attitude with respect to the new competitive dynamics in Seattle.

In the short term, Alaska is still facing unit revenue headwinds both from its own capacity growth and competitive capacity expansion in Seattle, which may be fuelling the cautious approach investors are taking towards the company.

In 2014, arguably at the height of Delta’s encroachment, Alaska gained investment grade status. For the 12M ending 3Q2014, Alaska’s free cash flow as a percent of revenue was 6.1%, compared with 6.3% for industrial transport companies.

However, during a recent investor conference it was pointed out to Alaska that other industrials have higher multiples than Alaska’s, whose average P/E ratio is roughly 10x. It was also highlighted that while Southwest and Alaska have a lot in common, Alaska continues to trade at a discount to both high quality industrial companies (the buzzword many airlines presently use to define their aspirations) and Southwest, which has an average multiple of approximately 25x.

Addressing some of the impediments Alaska faces in obtaining a better multiple, CFO Brandon Pedersen remarked that in the past the deficit largely stemmed from Alaska being relatively unknown to investors. But with its network expansion and growth, it has become more recognisable, and has achieved some multiple expansion. Based on compilations from Yahoo Finance, Alaska’s average multiple during the last five years have averaged 10.81, but has got as high as 16.07.

Obviously Alaska feels confident that it will handle what is now accepted competitive dynamics in Seattle, and its overall financial performance continues to be strong. However, there could be two issues holding back investor enthusiasm – weak unit revenue trends and Alaska’s projected 10% capacity growth for 2015.

With the added capacity in Seattle – both from Delta and Alaska’s own expansion – Alaska’s unit revenues have been under pressure for several quarters. During Jan-2015 its total unit revenues fell 7.7% year-on-year and dropped 6.5% in Feb-2015.

Mr Pedersen explained that approximately 3.5ppt of the decline in Jan-2015 is a result of Alaska carrying a lot of passengers from other airlines during the same time period the year prior due to harsh storms that struck the US east coast and midwest, and a promotion that runs through Apr-2015 that allows passengers a free first checked bag. He estimated those factors contributed to a 2ppt decline in unit revenue for Feb-2015.

Alaska’s CFO also highlighted that competitive capacity was up roughly 14% during those months and the airline’s own capacity grew approximately 10%. Taking all those factors into account, Mr Pedersen concluded that the unit revenue performance was in line with Alaska’s expectations.

Alaska sees some unit revenue relief in 2H2015, but positive growth is tough to predict

Alaska projects that competitive capacity will grow quite a bit in 1H2015, but should moderate during the second half of the year. Mr Pedersen stated that presumably the negative unit revenue trend should “sort of be mitigated at that point”.

However, he cautioned that there is some industry sentiment that at an industry level unit revenues in 2015 will be flat to slightly down. Those viewpoints, coupled with the competitive situation in Seattle and bit of competitive capacity growth in 2H2015, Mr Pedersen stated that positive unit revenue growth “might be less likely than not”.

The 10% projected capacity growth for Alaska in 2015 offered by Mr Pedersen is slightly higher than the 8% to 9.5% originally forecasted by the company. The airline is pushing some lease returns of its older Boeing 737-400s to 2016 to take advantage of an inexpensive lift in markets that need capacity, said Mr Pedersen. CAPA’s Fleet Database shows that presently Alaska operates 21 passenger 737-400 passenger aircraft. Alaska plans to retire the entire -400 fleet in 2017.

Those routes may not produce the same margins as Alaska’s system-wide network, said Mr Pedersen. Noting that if Alaska has a system that generates a 17.5% pre-tax margin and the margin generated on routes operated by those incremental -400s is 11% to 12%, the flying is still profit accretive and creates a positive shareholder return.

Mr Pedersen maintained that Alaska retains a strong position in Seattle, holding a roughly 54% share of the market compared with approximately 20% for its next largest competitor. Data from CAPA and OAG show that for the week of 30-Mar-2015 to 5-Apr-2015 Alaska accounts for a 58% seat share of domestic seats on offer from Seattle. It accounts for about 55% of system wide seats and 28% of the international seats. 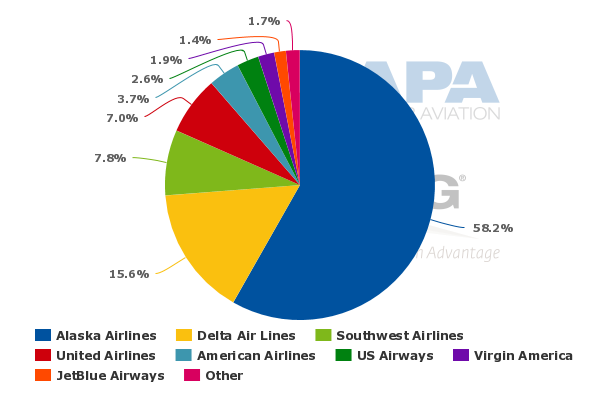 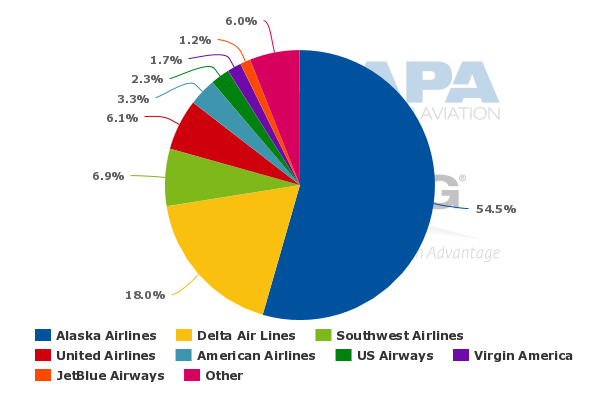 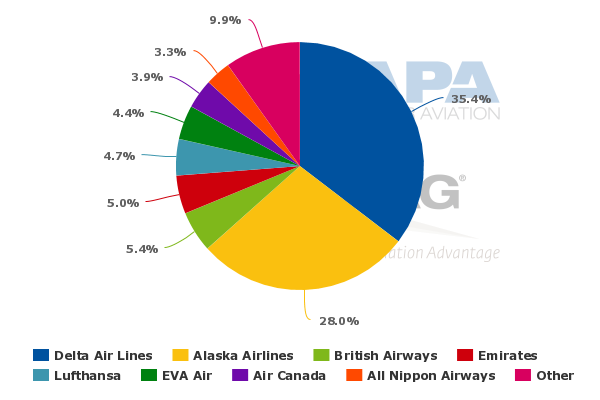 As Delta has built out Seattle as a hub for long-haul service mainly to Asia, it has also rapidly added domestic routes from the airport to support its trans-Pacific operations. It has opted to operate those routes itself rather than rely on a longstanding codeshare arrangement with Alaska. Previously, Alaska has stated that its competitive overlap with Delta in Seattle should reach approximately 50% in summer 2015.

Alaska’s capacity increases from Seattle (including a projected 11% rise for the spring of 2015) have spurred questions about the logic of adding supply when Delta is rapidly building up its presence in Seattle. In the past Alaska has maintained that the expansion is a good long-term investment for the company.

Its latest routes from Seattle include new daily flights to Washington Dulles that debuted in Mar-2015. Alaska is breaking United’s monopoly on the Seattle-Dulles route.

In Jun-2015 Alaska is launching flights from Seattle to New York JFK, joining American, Delta and JetBlue in the market. It also plans to increase its frequency from Seattle to Atlanta in Aug-2015 from daily to twice-daily, upping competition with both Southwest and Delta. Alaska’s latest routes from Seattle display a certain confidence that its strong passenger base in the market is unwavering even as Delta remains an aggressive competitor.

Investors remain cautious with Alaska, but it has yet to disappoint in important metrics

Despite Alaska’s impressive balance sheet and elite membership in the small group of global investment grade airlines, its valuation is likely to continue to trail its peers now that Delta is a mainstay at Alaska’s Seattle hub. Investors appear to need much convincing that Alaska can withstand the heft that Delta brings to Seattle, and the line in the sand it has drawn in making Seattle a major Asian gateway.

In some ways investors are correct to adopt a cautious approach to Alaska as Delta’s breadth, depth and take-no-prisoners approach is a formidable force for a much smaller competitor. But so far overall Alaska has held its own, delivering growth in important metrics such as ROIC, which was 18.6% in 2014. The story in Seattle remains unwritten, but Alaska is best positioned among the smaller US airlines to withstand Delta’s relentlessness.