*Based on the average conversion rate at USD1 = AUD1.13652 during the reporting period
**In 2009, AIX received AUD14.2 million from Perth Airport in the form of a shareholder loan payment. This amount is not included in revenue for 2009 but is included in the cash flow

Following the release of AIX’s FY2010 financials, Deutsche Bank stated its valuation of AIX remains at AUD2.30ps with the retention of a "buy" rating for the stock due to the material return potential relative to the current share price. Deutsche Bank’s valuation is based an average of: a discounted cash flow (DCF) methodology; and a 25% discount to its MAP price target on the basis that AIX only has minority stakes in assets and remains an externally-managed vehicle.

New Zealand’s Auckland International Airport (-0.5%) announced its revenue fell 1.4% as part of its financial highlights for the 12 months ended 30-Jun-2010:

MAp Group (+3.9%) announced the AUD230 million sale proceeds of its 16% stake in Aeroportuario del Sureste (ASUR) will be returned to unitholders through a distribution equivalent to AUD12.5 cents per stapled security. MAp will declare the special distribution within weeks, and make payments shortly afterwards. The company recently sold its stake in ASUR, at a USD28 million (AUD32 million) loss on its investment several years ago.

Meanwhile, Deutsche Bank stated MAp’s cash balance should increase to more than AUD1 billion following the sale of its 16% stake in ASUR with the company deeming that the proceeds are surplus to its current cash requirements. Deutsche Bank also stated it views MAp’s decision to distribute AUD 12.5 cents per stapled security as a positive, as it reportedly signals management’s comfort levels around MAp’s capital structure and the refinancing of its debt. 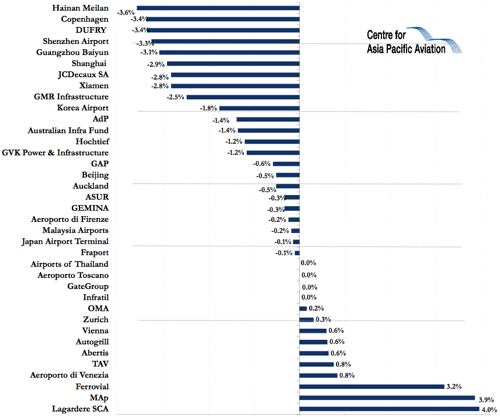