Thailand, where tourism historically accounts for 12% of GDP, took the full force of the COVID-19 pandemic.

But measures belatedly taken by the government have enabled Airports of Thailand (AoT), the biggest operator and one which is in the process of expanding from six to nine airports, to publish financial statements that at least document a steadying of the boat financially.

Originally a state enterprise, AoT was corporatised in 2002. A subsequent partial IPO (30%, institutional and retail investors) was held in 2004, the state retaining 70% through the Ministry of Finance.

AoT’s results are released against the back drop of Thailand’s slow emergence from the COVID-19 pandemic and the associated lockdowns and travel restrictions.

The problem is that the company has started to increase revenues and narrow its losses just as the main tourist season ends, placing an onus on the Tourist Authority to find new markets, quickly.

Airports of Thailand (AoT), the principal and partly privatised operator of Thailand’s main airports, including those in Bangkok, has released its financial statements for the three and six months ending 31-Mar-2022.

Originally a state enterprise, AoT was corporatised in 2002 and a subsequent partial IPO (30%, institutional and retail investors) was held in 2004, the state retaining 70% through the Ministry of Finance. 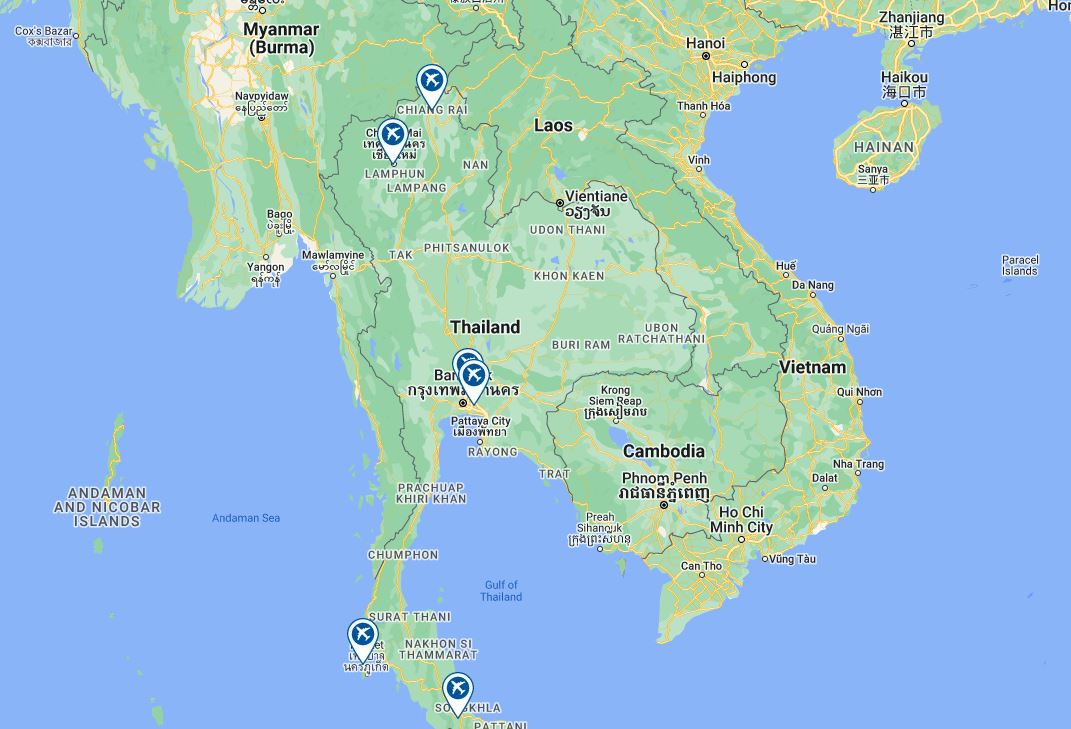 In Sep-2021 Thailand's Transport Minister reported that the management of Udon Thani Airport, Krabi Airport and Buriram Airport would shift from the Department of Airports (DoA) to the control of AoT on 30-year leases. The aim was to increase capacity at the airports, making them into regional air transport hubs to accommodate more tourists. The decision caused some friction because these airports are DoA’s main money-makers.

Udon Thani Airport and Buriram Airport would be handed over to AoT on 01-Jan-2022, with Krabi Airport to be transferred at a later date. However, the January transfer did not take place, and in late Mar-2022 it was announced that it would do in Apr-2022.

It still hasn’t officially, but it may be that AOT has assumed management duties. The most recent report has it that the Krabi and Udon Thani airports will officially open in Aug-2022, with Buriram Airport to follow in Sep-2022.

Thailand is crawling out of COVID gutter, along with its tourism business

AoT’s results are released against the back drop of Thailand’s slow emergence from the COVID-19 pandemic and the associated lockdowns and travel restrictions.

The country could argue that it was the worst affected of any in the world that are reliant on tourism. In normal years the percentage of Thailand’s GDP that is accounted for by tourism reaches 12%, the same as in Spain.

In the first half of 2022 cases peaked for a second time in a year, following a year in which, unaccountably (and like North Korea), Thailand reported hardly any COVID-19 cases at all. That second peak reached its zenith in Apr-2022, with 50,000 cases a day, although that is only a quarter of the number in some countries with a similar population size.

However, that second peak is subsiding quickly at present, with the number of reported daily cases now dropping to 5,000. AoT and the tourism authority will be desperate for this to be a signal of the end of the pandemic in the country.

A ‘quarantine waiver’ helped bring back some visitors

Thailand has, where it could, brought in a ‘quarantine waiver’ for foreign tourists to help revive its vital tourism sector.

Both Thai and foreign passengers who have been fully vaccinated require no quarantine under the ‘Test & Go’ programme, effective 01-Feb-2022.

The CAPA chart below demonstrates that overall seat capacity in Thailand, while still well below that of 2019, is now at least consistently above 2020 and 2021.

The state planning agency now expects 5.5 million tourists in 2022, which is up from a previous forecast of five million made in Nov-2021.

But that’s still well below 40 million foreign tourists in 2019, suggesting the economic recovery will be slow and uneven.

Economic growth staggers from one crisis to next

Thailand is Southeast Asia’s second largest economy, and the government as well as AoT will be relieved that the economy returned to growth in the fourth quarter of 2021. It rebounded more quickly than expected, on robust exports and a recovery in domestic activity following an easing of the pandemic curbs and as borders began to reopen to foreign visitors.

However, no sooner did one growth impediment start to abate than the Russian invasion of Ukraine introduced another one, forcing the Bank of Thailand to revise the country's growth forecast down for the year, to +3.2%, from the +3.4% to +4.5% it had previously envisaged as prices began to rise.

At least economic sanctions on Russia will not impact greatly on tourism. In 2019 Russian visitors accounted for only 3.7% of visitors, although that had increased to 6.7% in 2021.

The largest supply of tourists in 2021 came actually from the UK, followed by the US, neither of which accounted for even 3% of visitors in 2019, and that is where the tourism authority might be tempted to focus its marketing this year.

Thailand: visitor arrivals by market for 2021

AOT's revenue increases have more than doubled in the last three months compared to the six-month period.

Aeronautical increases in both cases exceeded those of non-aero, indicating a slow return to normality in some parts of this segment, although concession revenues were stronger than in other non-aero elements.

Office and property rentals were the worst-performing segment, in common with several other airports and groups that have reported for the first quarter and, in fact, a small loss was recorded in the six-month period.

...but losses deepened in the longer period

In the six-month period both operating and net losses worsened versus the previous comparative period but in 1Q2022. While the net loss was worse again, the operating loss was reduced by 13%.

The number of flights decreased while the number of passengers slightly increased compared to the prior year’s corresponding period.

Clearly AoT has a long way to go still to balancing its books – let alone making profits. It continues to introduce measures to help it achieve that aim.

AoT’s financial results are summarised below.

Assistance measures to airlines are extended

AOT’s Board of Director’s meeting on 25-Nov-2021 approved measures to support the business of airlines and concessionaires by extending the period of assistance measures from 31-Mar-2022 to 31-Mar-2023. Also by extending the concession period for concessionaires operating commercial activities at the six airports under AOT’s responsibility for another year from the end date of the existing concession period, subject to the continuing progress of the COVID-19 pandemic (i.e. this extension could be changed, amended, or cancelled as appropriate).

In a section of its report entitled ‘Factors affecting future operating results’ AoT says that Thailand's tourism industry entered the low season at the end of this quarter (from Jul-2022), making the recovery of the aviation industry “challenging”. However, due to the relaxation of the pandemic control measures, travellers will “gain more convenience” and stimulate the recovery of tourism economy.

It adds that AoT has a plan to develop a digital cargo system to bring technology to support and enhance the management efficiency in the free zone area of Bangkok’s Suvarnabhumi Airport.

The report concludes by stating that AOT “remains committed to building confidence in passengers and service recipients by being well-prepared to provide services under strict measures to prevent the spread of COVID-19 by adhering to the COVID Free Setting guidelines in accordance with the measures of the Ministry of Public Health and has integrated its plans with various collaborating agencies to achieve the goals".

"AOT also focuses on safety, which is the heart of airport service, and is ready to work with the government to support the country's economic and tourism recovery”, the report adds.