Shares in airports worldwide continued to drop early in the week, with BAA parent, Ferrovial (-3.2%), and Chinese airports, including Shenzhen (-3.1%), Beijing (-2.7%) and Hainan (-2.3%) airports, leading the decline.

Airports of Thailand’s shares went against the trend, rising 2.5% in trading yesterday, after announcing earlier in the week it expects infrastructure investments over the next five years to be lower than the previously projected USD2.39 billion, due to declining construction costs.

Other positive performers in the Asia Pacific region include MAp (+0.4%) and Malaysia Airports (+0.3%), on stronger local traffic figures.

Shares in Mexico’s three major airport operators, GAP, ASUR and OMA, remain firmly in negative territory, after the release of their 3Q2009 financial results over the past few days. GAP, the last to report its results, registered an overall 4.8% year-on-year decline in revenue, due to a 5.8% cut in aeronautical revenue and a 1.3% decline in non-aeronautical revenue. The airport operator was down 1.2% yesterday, better than OMA (-1.8%) and ASUR (-2.2%). 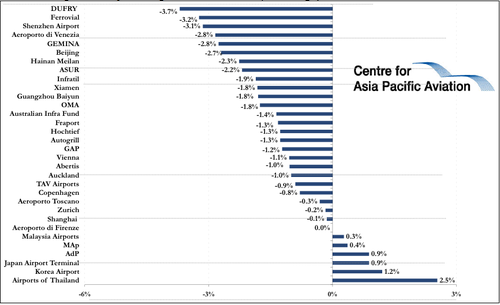