Airport shares on a high, Zurich Airport soars as it prepares to sell down its stake in Bangalore

Airport shares worldwide had a strong performance yesterday, led by Zurich Airport, which soared 8.2% following an announcement that it plans to reduce its shareholding in India’s Bangalore International Airport Ltd from 17% to just 5%.

Zurich Airport formally launched the Right of First Refusal Process with a valuation expectation for a 12% stake in BIAL shares of approximately EUR6.1 million on Monday (05-Oct-2009). The divestment process is expected to take four months. 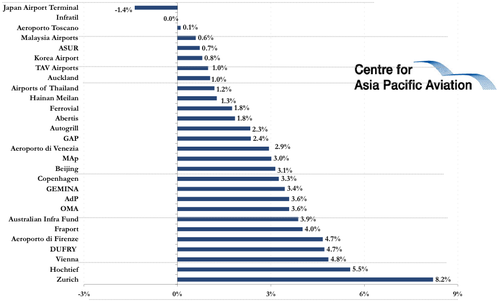