The International Air Transport Association (IATA), along with organisations such as the trade association Airlines for Europe (A4E) – especially those within Europe – has been on the attack, with privatised airports in their sights. Each regards such airports as monopolies that need stringent price regulation to protect airline passengers, and they regard privatisation itself as an unnecessary evil.

An independent U.S. organisation has found that of the 100 largest airport groups, 40 were either fully or partially privatised and 62% of them were included in the world’s hundred best airports as judged by passengers.

There have been some privatisation failures, of course, and there is still a sense of retail overkill at some privatised airports.

This report examines both sides of the argument.

The airline campaign ramps up

The theme of speeches made by IATA CEO and DG Alexandre de Juniac at several conferences can be summed up by this quote:  “We have yet to see an airport privatisation that has, in the long term, delivered on the promised benefits of greater efficiency for airlines and a better experience for our customers. Our members are very frustrated with the state of privatised airports. By all means, invite private sector expertise to bring commercial discipline and a customer service focus to airport management. But our view is that the ownership is best left in public hands.”

IATA has also recently gone on the offensive over the French government’s privatisation plans for Groupe ADP, stating the decision is a “highly significant step which must not be taken lightly by the French government”. IATA noted proposals, including a 70-year privatisation agreement, “would be a mistake, removing the flexibility to respond to market conditions which cannot be predicted over such a long period of time”.

Mr de Juniac is supported by Lufthansa’s CEO Carsten Spohr, who said in Mar-2018 that the privatisation of major airports in Europe was “a big mistake.” In other parts of the world, he said, investors may have a role in the infrastructure, but “they are not trying to optimise returns for pension funds”. (A reference to the large numbers of pension funds, particularly from Canada and Australia, that have invested in airports, though few have multiple investments in the sector).

In brief, there are two charges: that many airports are monopolies which need price regulation; and secondly, that airport privatisation has not improved airports. The second point is dealt with first as follows.

While Airports Council International (ACI) and its regional divisions are fundamentally responsible for disputing such charges, the mantle has also been taken up by the Reason Foundation, a U.S. think tank which “advances a free society by developing, applying, and promoting libertarian principles, including individual liberty, free markets, and the rule of law”, and which recently published a report that challenges both of IATA’s position points.

The Director of Transportation Policy, Robert Poole, compared a list of the world’s 100 largest airports with the 2017 Skytrax survey of the world’s “best” airports as identified by their users, the passengers.

Mr Poole found that of the 100 largest airport groups by revenues (2016 figures), 40 were either fully or partially privatised. Some 25 of the 40 privatised airports (62%) were included in the world’s hundred best airports as judged by passengers.

Among those top 100 airports as ranked by passengers were Zürich (#7), which is 61% floated on the stock exchange, London Heathrow (#8), which is owned by the private Spanish company Ferrovial and a host of funds including foreign pension and sovereign wealth funds, and Osaka Kansai (#9), which is operated under concession by Orix (Japan), Vinci (France) and many smaller investors. Mr Poole also notes that only five of the Skytrax top 50 airports were in the United States – a country with very limited airport privatisation to date. (Sources: CAPA Airport Profiles.)

The single example of privatisation in the U.S. is a hit with the airlines

In an investment starved industry, private funding can be useful. Mr Poole then moves on to consider the situation in the U.S., which are the newest to experience the change from public to private operation, and only sparingly thus far.

Airlines serving privatised San Juan International Airport in Puerto Rico, he says, are very pleased with the make-over of its “decrepit 1960s-era terminals”, as well as the refurbishment of its previously inoperative instrument landing system (ILS). And the major airlines serving both Chicago Midway and White Plains/Westchester (New York State) airports signed off, as they were required to do by FAA mandate, on privatisation plans that they judged to be in their best interest.

In consideration of the notion that privatised airports are not investing seriously in expanding terminal and runway capacity – a subject that has come under scrutiny also by CAPA – Mr Poole argues that is incorrect. He points to examples such as the partially privatised Aéroports de Paris (now Groupe ADP) and its 2016-2020 ‘Connect 2020’ plan, which has invested USD5.4 billion in increased terminal capacity, as well as the partially privatised Frankfurt Airport, which has added a fourth runway and is under way on a new passenger terminal and an expanded one.  (And Frankfurt is partially owned by Lufthansa)

At the same time the three main London airports, all separately owned by wholly (Heathrow, Gatwick) or partially (Stansted) privatised entities, collectively have projects under way or planned that amount to over GBP27 billion in capital expenditure, in addition to capacity expansion he singles out at privatised airports in Brazil, Chile, Colombia, Peru, and many other countries.

And at a lower level Vinci, since it took a 60% interest in Lyon Saint-Exupéry Airport in Dec-2016, has moved quickly to complete the penultimate phase of the airport’s Terminal 1 expansion project, representing a total investment of EUR215 million. Just as it did to revive the ailing Lisbon Humberto Delgado Airport when it took on the concession there in 2013 by acquiring ANA Airports of Portugal. Passenger traffic at Lisbon increased from 16 million per annum to 26.6 million between 2013 and 2016 (+66.5%). 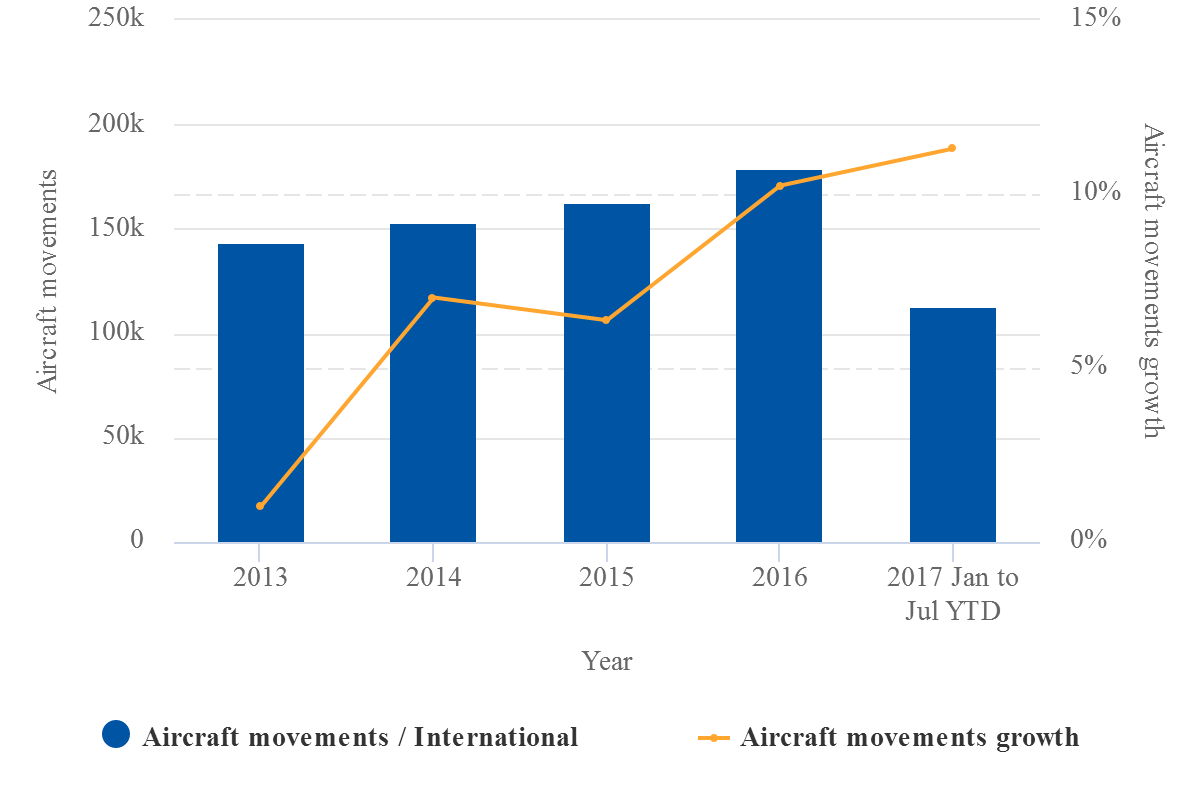 ACI points to the need for funding to come from somewhere, when governments won't step up

ACI World and ACI Europe have joined battle. Seemingly in response to M. de Juniac, ACI World, which says it has a neutral position on airport privatisation, stated in Jun-2018 that there is an urgent need for investment in airport infrastructure worldwide and that “privatisation has been shown to be a successful means by which to fund infrastructure development”, while “government spending cannot be relied upon as it has been in the past“.

According to its estimates, during the past five years privatised and partially privatised airports invested 14% more in capital expenditure for such projects than government-operated airports, and 12% more than the global average.

On the same day, ACI Europe responded to a recent study by Eurocontrol entitled ‘Challenges of Growth’ in which that organisation claimed that unless the capacity shortfall in 17 different European states is remedied by 2040, the continent will fall 1.5 million aircraft movements short of demand.  According to ACI Europe, that translates into EUR88.1 billion in “foregone economic activity in Europe by that date (2040)”, although just how they get such a specific figure down to EUR100 million needs to be published to substantiate such claims.

ACI Europe is also, theoretically, ‘neutral’ where airport privatisation is concerned, but possibly let slip a preference when it said that the financial performance of European airports had improved since 2011, with industry return on invested capital (ROIC) increasing from 5.1% to 8.5% in 2018; also that the key improving factors had been efficiencies and cost reduction – not revenue growth.

That statement is important for two reasons. First, because over 50% of European airports now have some form of private ownership and that percentage has increased considerably since 2011. Secondly, because it is privatised airports that are more likely to exercise greater control over costs and introduce new efficiencies, which translate into improved ROIC.

It is clear that Airports Council International is more fractured in its position on privatisation than is IATA. It has to think of its many members that are publicly owned, while there are very few airlines that support airport privatisation other than those that are themselves investors in airports (including Lufthansa), or have been, or could be – over 30 according to the CAPA Airport Investors Database.

There have been privatisation failures

There have been some privatisation failures, of course: in Latin America where too many corruption claims accompanied privatisation procedures 20 years ago; in the Middle East too, at Oman, although privatisation is back on the agenda there now – both inward and outward investment. In several cases in the UK and notably Heathrow Airport, which didn’t really make much progress as “Britain’s only hub airport” initially under Ferrovial (which is still the largest shareholder) and things have distinctly improved since UK and foreign pension funds came on board there. Much the same is true at London’s Gatwick Airport.

Moreover, there is still a sense of retail overkill at some privatised airports. There is still at least one major airport in the UK where passengers have to pass through what appears to be a giant displaced out of town shopping mall to get to the gates, which are themselves signed in such small writing that anyone without perfect 20:20 vision could easily not see them. You might miss your flight but you’ll be sure to pick up a duty-free bargain.

Privatisation and non-aeronautical revenue-generating activity go hand-in-hand. A ‘balance’ is often needed, but is not forthcoming.

The contrast in approaches is stark. As ACI Europe’s President Dr Michael Kerkloh said recently, some airlines “would still like airports to be just a shed – nothing more”, noting that in his opinion this goes against “what consumers actually want and expect”.

Dr Kerkloh maintains that corporatisation and privatisation of European airports "have transformed airports from mere infrastructure providers to multi-facet businesses in their own right", with technology and digitalisation opening “exciting opportunities to deliver an integrated and much-improved passenger experience”.

Finally, returning to IATA and A4E’s first charge against the airlines, that many airports are monopolies which need price regulation, the Reason Foundation’s Mr Poole refutes three claims with reference to the ACI position. These are repeated verbatim below.

Both sides make valid points, but their perspectives are quite different

One major defining difference in approach is that, whereas the ethos of the pension funds for example is that they typically invest in infrastructure that could last 100 years, airlines must march to a different drumbeat. The airline industry is also a highly capital intensive industry, but its horizons are necessarily considerably shorter. And, seemingly inevitably, airports must bear the cost of any new construction long before it is revenue producing.

So it is perhaps no surprise that airline and airport representative bodies appear consistently to take divergent tracks with the consumer, the ultimate customer, in the middle trying to make sense of it all.

The CAPA Airport Privatisation and Finance Review 2018 will be published shortly. Please contact info@centreforaviation.com to get your copy.