Can full service carriers close the cost gap with low-cost carriers? Is this the right question to ask? Why do FSC groups create LCC subsidiaries? Can a network model and a point to point LCC model co-exist within the same group? What does this mean for corporate culture?

At CAPA's Airlines in Transition 2014 conference in Dublin in Apr-2014, Professor Rigas Doganis led a panel discussion examining the issues of the hybridisation of the LCC/FSC business models and operating dual LCC/FSC brands within the same group.

Structural instability is forcing a search for innovative solutions

Against a backdrop of structural instability in the industry, airlines have been struggling to find a model that works, according to Professor Doganis. This instability results from the weaker global economic growth of recent years, in particular slowing growth in previous powerhouse economies such as China and India; from historically high fuel prices; from the "undermining" of legacy carriers by LCCs; from the rapid expansion of the Gulf carriers (and Turkish Airlines); and from the weakness of the air cargo segment of the market.

In response to this instability, the industry has seen some consolidation and this has particularly benefited the US, where 45% of global airline profits are now made. In addition, new marketing concepts have evolved, with legacy carriers learning from LCCs by offering unbundled pricing and establishing LCC subsidiaries (more than one LCC subsidiary, in the case of some Asian groups).

LCCs have also had to change and adapt, undergoing consolidation and market exits, adding product features, developing a cross-border joint ownership model to by-pass nationality restrictions (in Asia in particular), and forging links with FSCs. 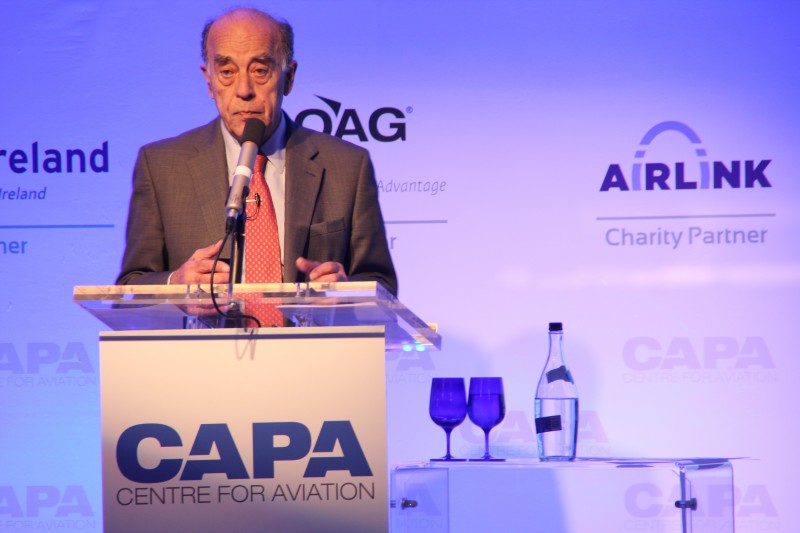 Can FSCs close the cost gap?

For IAG CEO Willie Walsh and Aer Lingus Chief Strategy and Planning Officer Stephen Kavanagh, the target is not necessarily to close the cost gap with LCCs, but to widen the gap between costs and revenues in their airlines.

According to Mr Kavanagh, "Aer Lingus has tried to generate a return on capital and cost reduction is part of that". His airline competes with ultra-LCC Ryanair and he concedes that Aer Lingus has higher unit costs, but it also has higher revenues per seat. He argues that passengers "value service attributes", adding that Aer Lingus "can differentiate in a sustainable way". While acknowledging Ryanair as "one of the world's great deliverers of shareholder returns", he claims that Aer Lingus is covering its cost of capital and notes that it is paying dividends.

IAG's Mr Walsh echoes this: "It is not just about costs, but revenues too", he says. Nevertheless, he claims some success for legacy carriers on cost reduction: "Legacies have become much more efficient on non-fuel unit cost. IAG expects a reduction in 2014, while easyJet expects an increase. The gap has narrowed and will continue to narrow. The focus is on getting return on invested capital above the cost of capital; that's how we get a sustainable industry".

For Erik Venter, CEO of South Africa's Comair, it is not so much a question of closing the cost gap, but of ensuring the right cost level for each part of his business, which consists of a full service carrier operating as a British Airways franchisee and LCC subsidiary Kulula Air. "The cost base of the two bits of the Comair business is very different due to seat density", he notes, adding that there is a 25% seat cost difference. By contrast with other regions, where experience suggests that a successful LCC subsidiary must be allowed to operate on a stand-alone basis with its own cost culture, Mr Venter says that both parts of Comair operate with "the same people and corporate values".

The Saudi Arabian market is a little different from elsewhere, according to Raja Azmi, CEO of LCC flynas. He points out that his principal competitor, national carrier Saudia, is a "subsidised airline", benefiting from a fuel subsidy. By contrast, flynas receives no benefits and is forced to operate under the nationally imposed fare cap in economy class, originally designed to protect consumers under a Saudia monopoly. Although this necessitates a strong cost focus, he admits that there is "still room for efficiencies on costs". In addition, as a response to the fare cap, the LCC has instituted a business class to increase yield, since the cap does not apply in the premium cabin.

FSC objectives in launching a LCC? IAG set up Iberia Express "to show it could be done"

Although not applying the 'LCC' label to Iberia Express, IAG established this subsidiary of its Spanish legacy carrier as part of the restructuring of Iberia in response to what Mr Walsh calls "restrictive" labour laws. "Restructuring was more difficult than creating a new subsidiary", he says, claiming a significant degree of success for Iberia Express. "Its non-fuel costs are 40% less than Iberia and it covers its cost of capital".

Moreover, the creation of Iberia Express played a part in prompting change within Iberia itself. "We did it to show it could be done", says Mr Walsh, "and now we've succeeded in restructuring Iberia". Iberia's unions have agreed to new labour contracts and Mr Walsh says that "we still need to translate a good agreement on paper into a good airline, but we are on the road".

With new labour conditions in place, Mr Walsh says that it is now cheaper to expand on short haul through Iberia than Iberia Express as "we have people there and can get better productivity". Nevertheless, he continues to see a role for both. He argues that the brands are different and the seat configurations are different. Iberia Express is a short haul, low cost, low frills hub feeder, while Iberia has a long haul network and offers a premium cabin. "This gives flexibility", says Mr Walsh.

He rejects any suggestion that IAG is pursuing what Professor Doganis calls the Noah's Ark Model (having something of everything). While it has two low cost brands in Spain (Vueling and Iberia Express), he says that they do different things (point to point and hub feed, respectively). "Vueling grew capacity and profit in 2013; BA grew capacity and profit in 2013; Iberia improved its financial performance".

He does not see any possibility that Vueling might one day operate feeder routes into BA's Heathrow hub. "Does it work for both parties?", he asks, "Each part of the business needs to make a return". 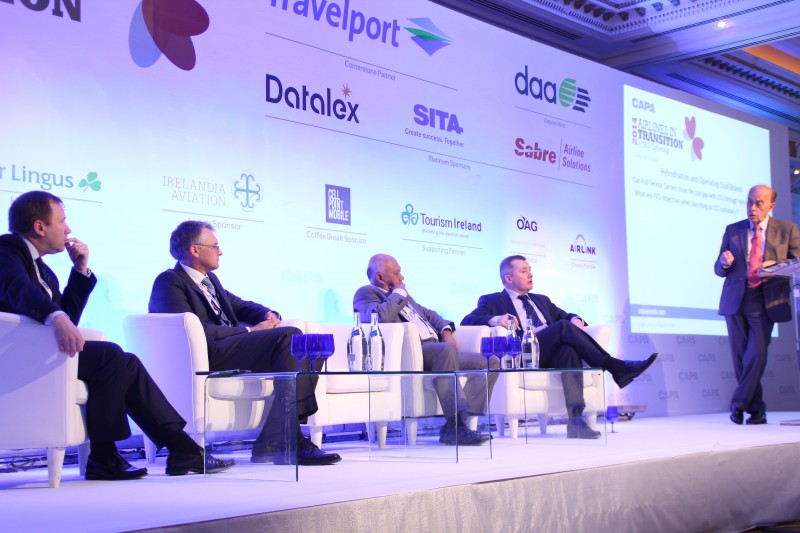 Aer Lingus' Mr Kavanagh changes the question from one of why a FSC would set up a LCC on short haul to talk about why Aer Lingus, which is primarily a short haul carrier operating a model that sits between FSC and LCC, is expanding its long haul network. Aer Lingus grew on long haul by 15% in 2013 and plans the same again in 2014. "Consumers see value", says Mr Kavanagh. He argues that the efficiency lessons concerning "distribution, seat density, utilisation" that Aer Lingus has learned on short haul all apply to the long haul business, "but the consumer expects less unbundling".

He notes that Canadian LCC WestJet is launching a service to Ireland, but he sees this as "opportunistic". Aer Lingus is also now offering a service to Toronto, through a wet lease arrangement with ASL Aviation, who operates the route with Boeing 757 equipment in comparison to WestJet's 737.

Aer Lingus operates an Airbus fleet, but the outsourcing of this route to ASL (together with the provision of additional frequencies on Aer Lingus' New York and Boston services) avoids what Mr Kavanagh calls "duplication issues" that come with operating a mixed fleet. Moreover, "load factors indicate the choice we're offering is going to be acceptable."

Can a network model and a point to point LCC model co-exist?

Comair's Mr Venter argues that every situation has its own model and does not see any tension between the two products that he offers. He draws on an analogy from the beverage market: "The juice factory sells juice in a glass bottle and now also in a cardboard carton", he says, "If you have a culture of low cost, you can succeed, whether FSC or LCC".

Mr Walsh points to an example a little closer to the airline industry: "Intercontinental Hotels has multiple brands". IAG has BA, Iberia, Iberia Express and Vueling and there are inherent differences between the low-cost model and the network model that mean there is always likely to be a unit cost gap. As Mr Walsh points out, a large, capacity constrained hub such as London Heathrow means more cost, "but it's full as people want to fly there." Moreover, airports such as Heathrow also tend to have a higher yield.

He refers to the "inherent cost inefficiency of the network model", which is partly structural, for example due to reduced daily utilisation compared with the point to point model. Nevertheless, Vueling offers connections at Barcelona without "interfering with utilisation". Mr Walsh prefers to avoid the LCC label, referring to Vueling as a "new generation carrier".

Aer Lingus operates both long haul and short haul at its Dublin hub, with a significant level of connectivity from one to the other. "But we don't compromise the short haul schedule", says Mr Kavanagh, "Each part is profitable, there is no cross-subsidy".

Mr Venter concedes that Comair's British Airways business has come with associated cost penalties related to making connections with BA long haul flights, but says this "doesn’t conflict too much with our point to point needs". While the schedule operated by the BA franchise business is "less efficient" than the Kalula operation, its yield is also higher, he says. Both use the same ground infrastructure.

Mr Azmi says that hubbing is not a major strategy for flynas, but connecting traffic is "a consequence of the meeting of flights". Flynas has recently started long haul with the introduction of a Jeddah-London Gatwick service. As for running a dual brand strategy, he sees airlines as a kind of fast moving consumer good, with different types of product available. "FSC versus LCC is really a mindset", says Mr Azmi, "LCCs look cost up, FSCs revenue down". Unlike the example of Mr Venter's Comair, Mr Azmi suggests that "one corporate culture may not always work".

"You need all parts to make a return". Strategic losses are not the way to go

Although comfortable with having LCCs alongside FSCs in the same group, Mr Walsh is sceptical that the Lufthansa approach of outsourcing a large chunk of its short haul point to point network to its LCC subsidiary is the right approach.

"Germanwings is not profitable, so I can't see how that works", says Mr Walsh, who argues that the franchise model is "interesting".

He says that British Airways does not interfere in Comair and the franchise model works. "Some models work, some don't", he adds, noting that BA's former arrangement with BMed "stopped working after a period". For Mr Walsh, the key point is that "you need all parts to make a return; you can't justify loss-making on 'strategic' grounds".