US airlines downgraded on rising fuel

With expectations for fuel remaining high or even rising, Dahlman Rose Analyst Helane Becker issued a research note the company was downgrading the industry because it believes rising fares will destroy demand and airlines won’t reduce capacity as much as they should.

Dahlman Rose does not expect to change its opinion on the prospects for the industry unless the airlines report higher than expected first quarter earnings and if Brent corrected to a USD100-105 range. The company also said if more capacity were pulled out than has been announced, it would temper its opinion of the industry.

“In 1Q2011, airline managements were quick to respond to higher crude prices by raising fares,” said the company. “Unfortunately, between poor weather in January and February and Brent crude continuing to move higher seemingly on a daily basis, managements have been unable to catch a break. We lower our 1Q2011 EPS estimates as well as our full year estimates, and the result is stocks are overvalued in our opinion.”

While she cited the 13% decline in the XAL Index, the company expects a downside as spot jet fuel rises over USD3.40 per gallon.

“Airline company equities have underperformed the market this year due to higher jet fuel prices,” said the company. “The current USD3.41/gallon price does not bode well for airline margins for at least 2Q2011, and most likely 3Q2011 as well. We believe higher average ticket prices are covering a portion of the cost increase, but not the total increase, and as a result, we believe 2011 estimates are too high. In an environment of higher energy prices, we believe it will be difficult for airline company equities to outperform the market. Higher average ticket prices will likely cause demand destruction, and although we expect airlines to reduce capacity to offset reduced demand, we are concerned that their 2H2011 reductions will be insufficient.” 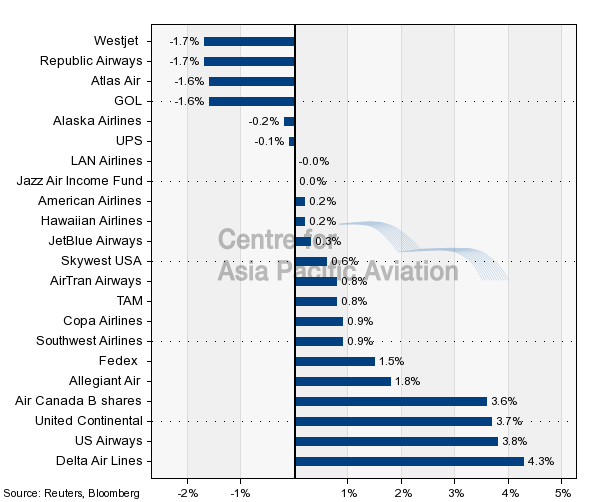