IATA, in its May/Jun-2011 Airlines Finance Monitor, stated airline share prices were 12% down so far this year, compared with a 2% rise in worldwide share prices. Higher oil prices and slower economic growth will damage airline profits more than the profitability of most sectors, IATA said. Meanwhile, airline net losses for 1Q2011 have so far totalled USD1.8 billion, as improvements seen in the previous three quarters were ended by the fuel price surge.

Financial markets fell during Jun-2011, as concerns grew about the strength of economic growth. Airline share prices declined 3.7%, more than the 1.8% fall in the FT Global All-Cap index as markets judged that airlines are one of the sectors most exposed to such an economic slowdown. 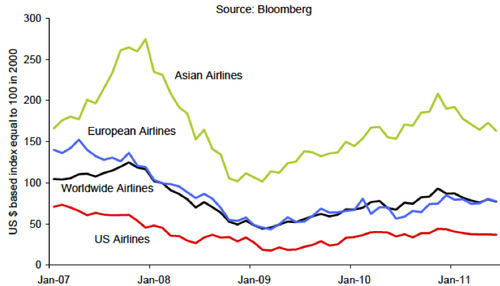 Growing concerns about the strength of economic growth caused all commodity prices, including oil, to decline in Jun-2011. Oil prices fell to USD105/barrel and jet kerosene to USD121/barrel. According to IATA, the majority of forecasters are anticipating stronger economic growth in 2H2011, which would underpin oil prices. However, even if prices do not rise, levels are still almost 40% higher than 1H2010. The crack spread versus Brent remains relatively low at 15%. However, the spread with WTI is closer to 40% causing major basis risk hedging problems for some airlines. 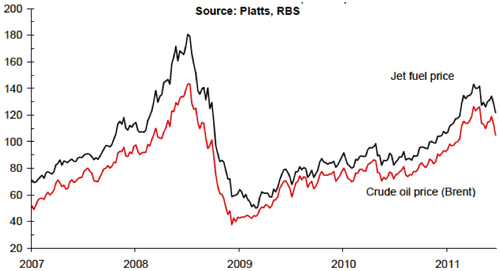 1Q2011 losses similar to 2010, ending improvements of past three quarters

The negative effect of rising fuel prices on profitability was seen in 1Q2011. The substantial improvements in airline profits seen between 2Q2010 and 4Q2010 have now ended, as fuel costs are now considerably higher and revenues are slowing. Some slippage in asset utilisation has also been send.

EBITDA in 1Q2011 for major airlines was down 2-5% of revenues on the 3Q2010 peak, with net post-tax profits among a sample of over 50 major airlines revealing a result that was “little better than last year”.

IATA, when it halved its forecast for airline industry net profits in 2011 to USD4 billion in Jun-2011,  stated the cost of fuel is the main cause of reduced profitability for the industry in 2011. IATA raised its forecast for the average price of Brent crude from USD96 to USD110 per barrel (Brent), marking a 15% increase over the previous forecast.

On a more positive note, Mr Bisignani stated the industry has “built enormous efficiencies over the last decade. In 2001, we needed oil below USD25 per barrel to be profitable. Today, we are looking at a small profit with oil at USD110 per barrel”.

Passenger yields continue to rise but so are unit costs

Passenger yields, at least for US airlines, have improved 5% so far in 2011 to be above pre-recession peak levels. However, with spot jet kerosene prices being 25% higher in May-2011 than at the end of 2010, around 5% has been added to unit costs, before hedging.

Airlines, in some regions at least, are managing to reflect the higher cost of fuel in the yields they are earning, according to IATA. However, the association noted that the damage to profitability is being done as price-sensitive passengers are discouraged and asset utilisation declines. 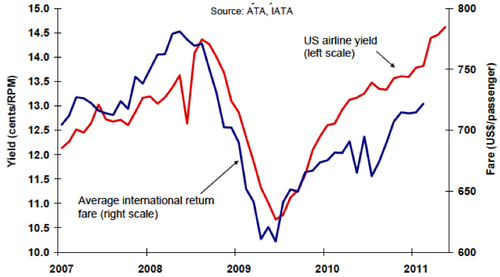 New aircraft deliveries back above 100 a month and rising

IATA stated 110 new jets and turboprops were delivered in May-2011, adding around 0.5% to the fleet before retirements. There were also 45 aircraft brought out of storage back into the active fleet. This was largely a reversal of the parking by Japanese and MENA airlines as a result of the events in Feb-2011 and Mar-2011.

Over 1300 new aircraft are scheduled to be delivered this year, representing an additional 5-6% of the existing fleet. So far there is little sign of a corresponding acceleration in storage or retirements, according to IATA. 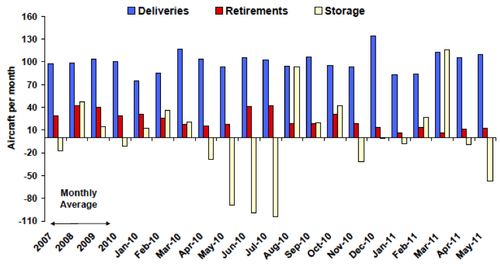 Air travel markets are now well above pre-recession peaks, although the trend rate of improvement has slowed since 4Q2010. Air freight markets have shown disappointingly little progress over the past year, but now seem to be growing once more.

While capacity was cautiously brought back to market following the financial crisis, capacity has been expanding since 4Q2010 at a faster pace than traffic volumes. Passenger capacity (ASKs) has increased by almost 6% year-on-year in May-2011 and published schedules suggest this expansion will extend through the rest of the year at a pace of 7-8%, according to IATA. Comparatively, the demand trend looks to be rising at an annualized pace of 4% p/a, according to IATA, for both freight demand and capacity. Freight capacity has been slower to rise than passenger capacity but in the past six months has started to accelerate. 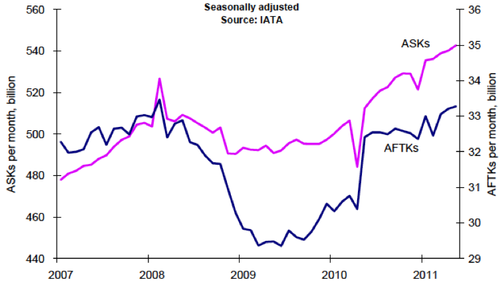 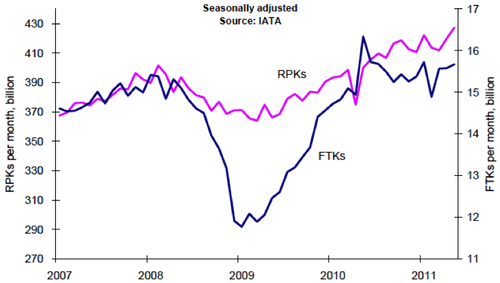 As a result of the capacity-demand balance, passenger load factors appear to be on a declining trend, following a sharp decline in 1Q201 which resulted in a squeeze on profitability. It remains to be seen whether the rebound in May-2011 will be sustained in the face of the delivery of new capacity and slowing economic growth, IATA noted. On freight markets load factors are still 4% points below the peak of early 2010.

Meanwhile, the rise in fuel prices has increased break-even load factors, making it even more important to boost utilisation. The rebound in load factors in May-2011 will have helped 2Q2011 profitability. 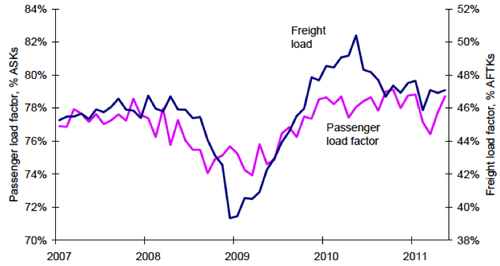