Airline profit margins are being pressured by high oil prices while the recent deterioration in the global economic outlook could potentially undermine business and consumer confidence, leading to a “more cautious” view on medium-term growth prospects, the Association of Asia Pacific Airlines (AAPA) said. AAPA, which has previously noted it has seen only “modest revenue growth” in 2011, stated that while passenger travel demand is still “quite strong”, supported by continued growth in both business and leisure travel, cargo markets remain weak.

Director General Andrew Herdmann added that while Asia Pacific airlines are in a “relatively favourable position”, as many of the region's economies are still witnessing solid growth, the recent deterioration in the global economic outlook is “cause for concern”.

Asia Pacific carriers are expected to return a USD2.5 billion profit in 2011 (EBIT margin of 2.9%), according to IATA’s updated financial forecast released this month, marking a USD400 million upgrade from its Jun-2011 forecast. IATA noted that while this is the largest absolute profit, the Asia Pacific region has also seen the “most dramatic downturn compared to 2010” when the region delivered USD8 billion profit. IATA added that “stronger Asian economies and intra-region travel and trade flows should enable Asia Pacific airlines to sustain their profitability through 2012”. IATA expects a USD2.3 billion profit in FY2012, for an EBIT margin of 2.8%, in the Asia Pacific.

Collectively, airlines based in the Asia Pacific region carried a combined total of 17.0 million international passengers in Aug-2011, a 3.9% year-on-year increase. Passenger numbers have increased in all but one month of 2011 (Mar-2011) and in every month of 2010. 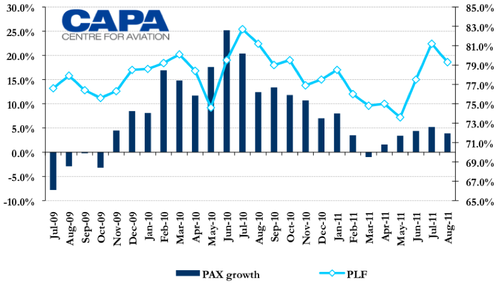 International traffic (RPKs) increased by 5.3% in Aug-2011, reflecting good demand on long-haul routes, although his was outpaced by a 6.0% increase in capacity (ASKs). As a result, the average international passenger load factor declined marginally, by 0.6 ppts to 79.3%.

International capacity growth at Asia Pacific airlines has exceeded traffic growth for the past eight months. As a result, load factors have also declined for the past nine months (Dec-2010 through Aug-2011) after 16 consecutive months of year-on-year load factor growth (Aug-2009 to Nov-2010). 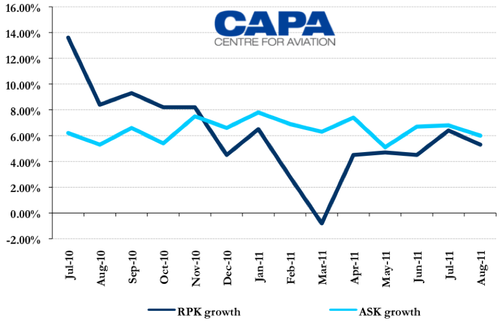 IATA, in its Financial Forecast, stated worldwide passenger demand has been stronger than anticipated given the gloomy economic outlook. The forecast for the year stands at 5.9% growth (up from 4.4% projected in Jun-2011). IATA anticipates traffic (TKPs) growth of 2.8% in the Asia Pacific in 2011, outpaced by a 4.1% increase in capacity (ATKs). The imbalance between supply and demand in the region is expected to be rectified in 2012, with traffic growth of 6.4% outpacing an anticipated capacity increase of 6.2% in the region. Asia Pacific traffic increased by 12.6% in 2010, following declines in both 2008 and 2009, with capacity growth of a more modest 5.8% in 2010, according to IATA.

International cargo demand (FTKs) declined 5.8% in Aug-2011, for the fifth consecutive month of year-on-year declines amid a slowing in Asian export demand following the strong rebound in 2010. Cargo capacity was reduced by a lesser degree (-1.3%), resulting in a 3.1 ppt decline in average international freight load factor to 64.5%. 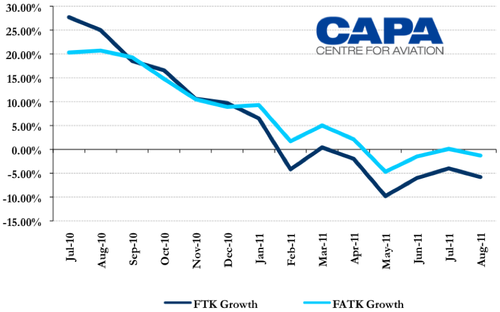 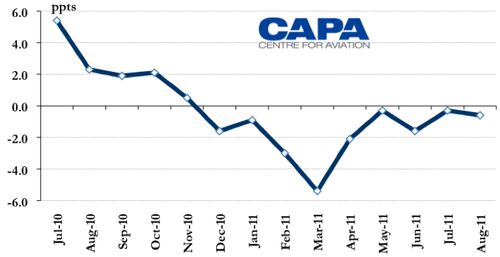 IATA this month noted that global air freight has stagnated since the start of the year. As a result, IATA has significantly reduced its full-year freight volume growth projection from 5.5% to 1.4%. Airlines are expected to carry 46.4 million tonnes of cargo in 2011, down from the previous forecast of 48.2 million, according to IATA’s forecast. Air freight volumes reached their post-recession peak in May-2010, largely driven by re-stocking. Jul-2011’s traffic was 4% lower than that level with IATA cautioning it “appears unlikely that a revival in air freight will begin before 2012”.

IATA added that the weakness of air cargo markets is disproportionately affecting airlines from the Asia Pacific region owing to the larger share of cargo in airline revenues. The shocks from the Japanese earthquake and tsunami continue to affect supply chains and cargo markets, in which Asia Pacific carriers have the largest market share. A strong rebound is expected late in the year continuing into 2012, according to IATA forecast.

In the eight months to Aug-2011, Asia Pacific-based airlines handled 126 million international passengers, a 3.5% year-on-year increase. However, air cargo demand weakened following a strong 2010, with a 3.8% decline in freight volumes over the eight-month period.