IATA this week raised its net post-tax profit forecast for the global airline industry in 2011 to USD6.9 billion, after downgrading the prediction from USD8.6 billion to USD4 billion in Jun-2011. Despite a better than expected performance in the passenger business in 1H2011, IATA is warning 2012 will be a year defined by “sluggish growth and weak profits” with a forecast net profit of only USD4.9 billion.

In announcing the revised outlook, IATA director general and CEO Tony Tyler called the increased profitability now anticipated for this year “good news” and said “given the strong headwinds of high oil prices and economic uncertainty, remaining in the black is a great achievement”. Mr Tyler credited higher than anticipated travel volume in driving the USD2.9 billion revision, explaining that “despite the economic doom and gloom, people are travelling”.

But he was quick to point out the industry’s profit margin will remain “razor thin” in 2011 and is expected to be even thinner in 2012. IATA is now projecting a profit margin of only 1.2% this year followed by 0.8% in 2012. “Unfortunately, poor margins seem to be a characteristic of the industry,” Mr Tyler said in opening a 20-Sept-2011 press conference in Singapore – one of Mr Tyler's first press conferences and his first industry outlook briefing since taking over the head IATA post three months ago. 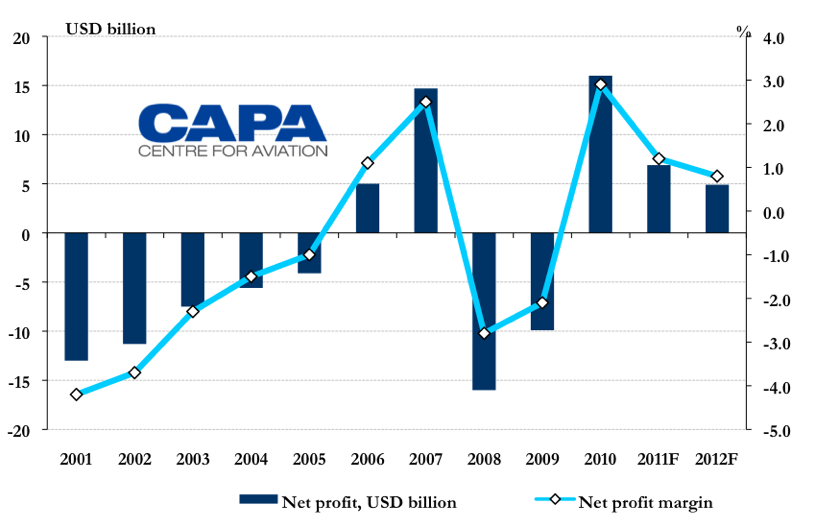 Mr Tyler added that even in the peak year of 2010, the industry’s profit margin was only 2.9%. “Airlines put in a lot of effort for very poor results,” Mr Tyler said.

IATA noted the global economic outlook has “deteriorated” since its last forecast in Jun-2011. Global GDP growth projections, for example, have been downgraded from 3.2% to 2.5%. Mr Tyler said airlines need a healthy global economy to be profitable and historically the industry slips into the red when GDP growth dips below 2%. “We are just above the threshold,” he warned. 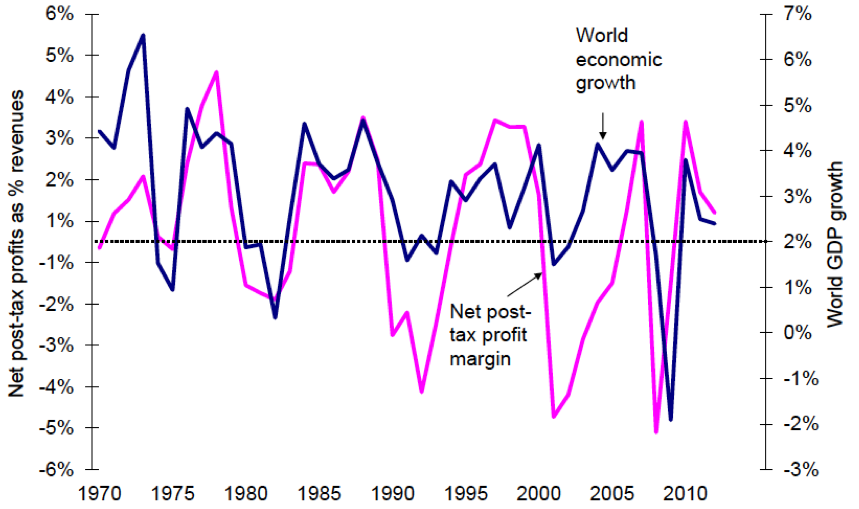 But despite the gloomy economy, IATA now expects all regions to be profitable in 2011 except Africa, which is projected to end the year with a breakeven result. For all regions the projected profits are higher than the IATA forecast in June.

Profit forecast for all regions raised; Europe revision the biggest

Ironically Europe accounts for the biggest revision in the forecast. While the European economy has weakened significantly and has been the source of most of the recent global economic problems, European airlines have done better than expected in recent months. Mr Tyler explained the weak Euro has helped volumes by stimulating more inbound travel and boosting exports.

He said stronger than expected volumes also drove a revision in the profit forecast for North American carriers while Middle East traffic has held up better than expected in the aftermath of political unrest. In Latin America, which is now expected to generate the industry’s highest profit margin in 2011 and again in 2012, the economy has remained strong and has been less impacted by the slow US economy compared to IATA's initial expectations.

While IATA has nearly tripled the forecasted 2011 profit for Europe, Mr Tyler warned this improvement is not sustainable. The weak economic situation in Europe is expected to catch up with European carriers in 2012, when profits are forecasted to drop to only USD300 million. “At the regional level, Europe stands out for its weakness,” Mr Tyler said.

IATA also has factored in the EU’s new Emissions Trading Scheme (ETS) in projecting the very small 2012 profit for European carriers. IATA estimates the ETS, slated for implementation from Jan-2012, will cost the industry USD1.1 billion.

IATA says all airlines operating to, from and within Europe will be impacted but “the brunt” of the financial impact will be on European carriers, which are already being challenged by Europe’s difficult economic climate. Mr Tyler is calling on the EU to postpone implementation of the ETS, saying IATA supports the concept of emissions trading but advocates a global rather than Europe-specific solution.

Tough 2012 across all regions forecasted, with low point likely to occur early in the year

While the drop in Europe will be the most precipitous, IATA expects profits will be down next year in all regions. Mr Tyler expects a “tough” 2012 due to slower growth in traffic and passenger yields, coupled with costs rising slightly faster than the expected 6% increase in revenues. The first half of the year is expected to be particularly tough as IATA believes the market will be at a low point from the end of 2011 through the first few months of 2012.

In absolute amounts, Asia is projected once again be the most profitable. Asia Pacific airlines are expected to contribute 46% of the total industry profits in 2011 and 47% of the profits in 2012. But even in Asia profits are expected to drop next year by USD200 million compared to estimated 2011 levels and by USD5.7 billion from 2010 levels.

EBITDA as percentage of revenues (seasonally adjusted) by region: 2005 to 2011F 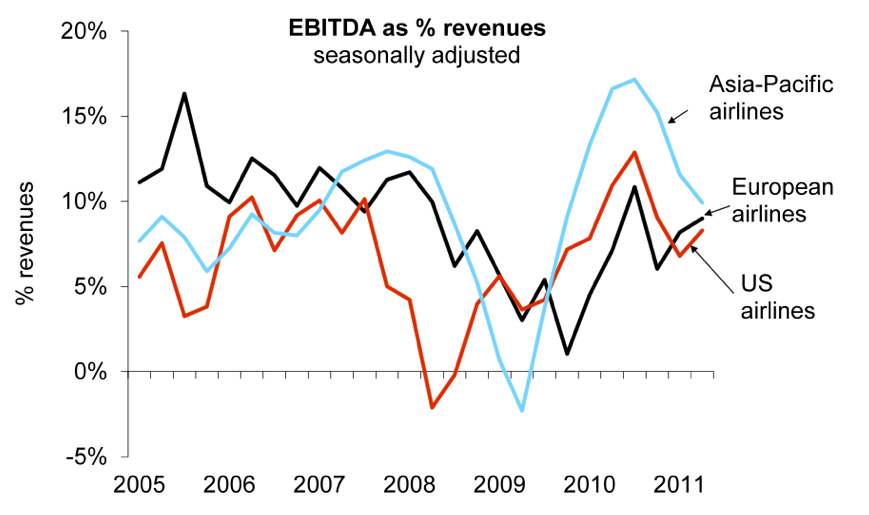 The typically high profits at Asian carriers have been dragged down this year by the impact of the Mar-2011 earthquake and tsunami in Japan. IATA in Jun-2011 said it expected the Japanese market to fully recover by the end of this year. While the recovery has so far been slow to materialise there are encouraging signs, including only a 2% drop in Japanese production figures in Jul-2011.

IATA chief economist Brian Pearce now expects airlines will start seeing “some improvement” in Japan over the next couple of months. Mr Tyler said the recovery in Japan “is slow and will take some time”. But he also noted Asia’s economies are “resilient” and typically bounce back faster than anticipated.

The weak air freight market also has had a proportionally big impact on the profitability of Asian airlines, which typically rely on cargo for a larger portion of their revenues compared to carriers from other regions. Forecast air freight traffic growth for 2011 has been lowered from the 5.5% predicted in Jun-2011 to just 1.4%. IATA also adjusted its 2011 forecast for cargo yield growth from 4% growth to zero, explaining the extremely low cargo load factors are taking away any opportunity to improve yield.

Despite all the recent gloom in the air freight industry, Mr Tyler pointed out that the recent drop in cargo traffic is driven more by the unrealistically high traffic figures recorded in 2010, which was created by the need to restock after inventories had collapsed during the global financial crisis. “I wouldn’t get too depressed about the downturn in cargo,” Mr Tyler said.

IATA’s passenger yield projection for 2011 remains unchanged at 3% growth. But IATA warns yield growth will likely slow in 2012, with forecasted growth of only 1.7%.

As usual, there will be major variations in growth by region. IATA significantly upgraded its 2011 traffic forecast for both Europe and Latin America, with downgrades across the other regions. The fastest growing regions will be Latin America, the Middle East and Europe.

Mr Tyler believes the projected increase in passenger capacity (5.7% in 2011 and 4.7% in 2012) can be absorbed. He said the fact passenger load factor and aircraft utilisation figures have been relatively high this year proves airlines “are not adding capacity too quickly”. He added that “at the moment things are pretty much in balance”.

Traffic data from 2Q2011 shows the industry has been able to restore passenger load factors back to 2010 highs. IATA also reported that late 2010 aircraft utilisation rates were restored in 2Q2011 “at least for single aisle aircraft”. This is an encouraging sign as IATA had previously anticipated that with new aircraft being delivered at a rate of 100 per month and older aircraft being brought out of storage, there would be a decline in asset utilisation and load factors. 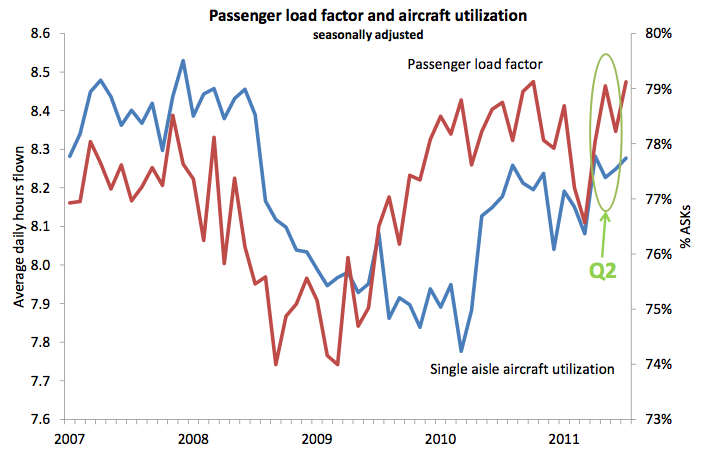 IATA stated that while European airlines achieved strong traffic growth in 2011, economic jitters in the region will likely limit growth in Europe in 2012. The maturing North America is also reporting weak growth, reflecting the maturity of the market and the limited capacity additions planned.

In contrast a solid rebound in the traffic carried by Asia-Pacific airlines is expected, with traffic (TKPs) forecast to increase from 2.8% in 2011 to 6.4% in 2012. This will occur among a recovering Japanese economy and continued expansion in non-Japan Asian markets. Growth prospects also remain relatively strong in Latin America and the Middle East, although IATA stated that the pace of growth will be “considerably down” from the post-recession rate.

Looking forward, IATA stated that “for European airlines the very weak home markets that are forecast for 2012 will produce a challenging environment. At the other end of the spectrum stronger Asian economies and intra-region travel and trade flows should enable Asia-Pacific airlines to sustain their profitability through 2012”.

Profitability across the global aviation industry is expected to decline by 29% in 2012 from estimated 2011 levels, resulting in a discouraging net profit margin of only 0.8% on the back of a weakening global economy and continued high fuel costs.

Passenger and traffic growth, meanwhile, will both weaken on a year-on-year basis, with yield growth to be minimal. Overall Mr Tyler stated that "it looks like we are headed for another year in the doldrums".

But then again the outlook for 2012 could always change, potentially for the better. In recent years IATA’s profits forecasts have typically seen relatively major adjustments as the year unfolds. In 2012, a major adjustment could be even more likely given the current uncertain state of the global economy.

Mr Pearce acknowledged that “it’s quite an unusually uncertain outlook” due primarily to the current state of affairs in Europe. He said airlines so far have held up better than expected but most of the risk from the ongoing European debt crisis has simply moved from 2011 to 2012. Mr Pearce is “still not sure how this will play out” and until more is known “risks for our 2012 outlook lie on both sides”.

The airline industry in recent months has once again shown its resiliency. Another better than expected performance for 2012 wouldn’t be too surprising. But after a year in which the industry has seen so many unpredictable shocks, the only certain thing seems to be uncertainty. 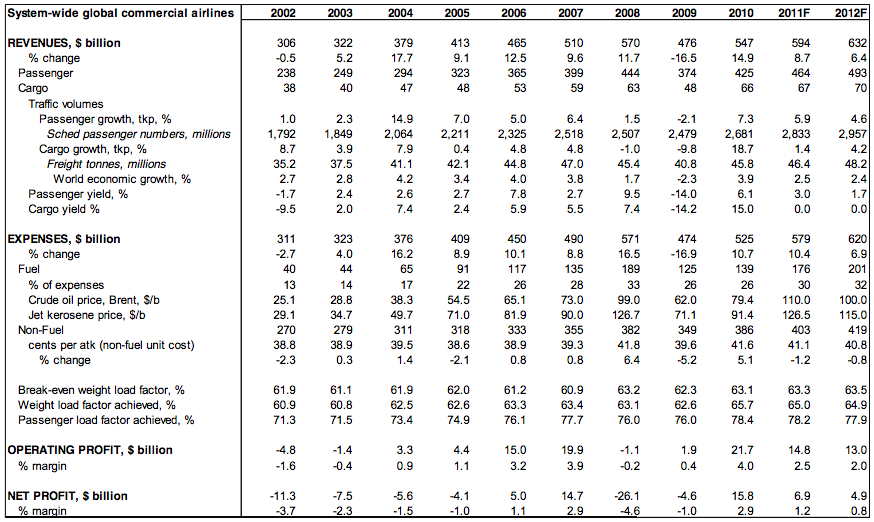 Source: ICAO data to 2009-10. IATA some 2010 estimates and 2011-12 forecast. Passenger and freight numbers are global system-wide collected by IATA, including non-ICAO states. 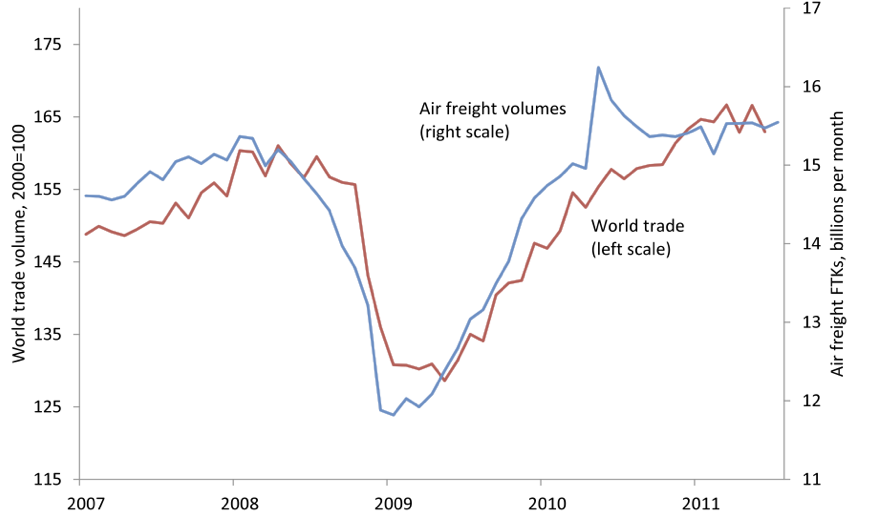 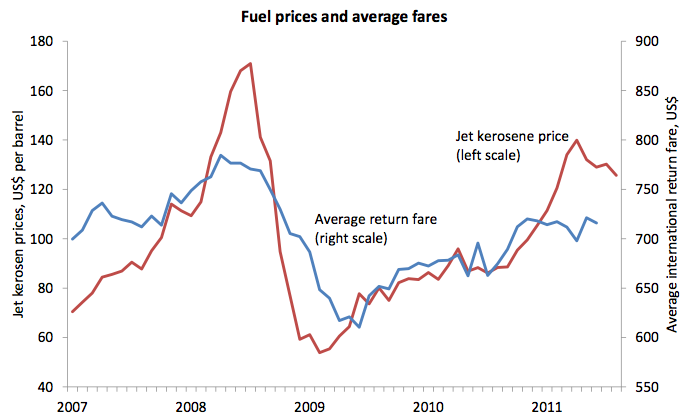 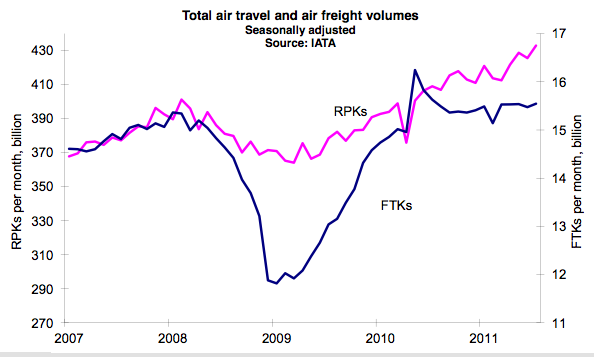 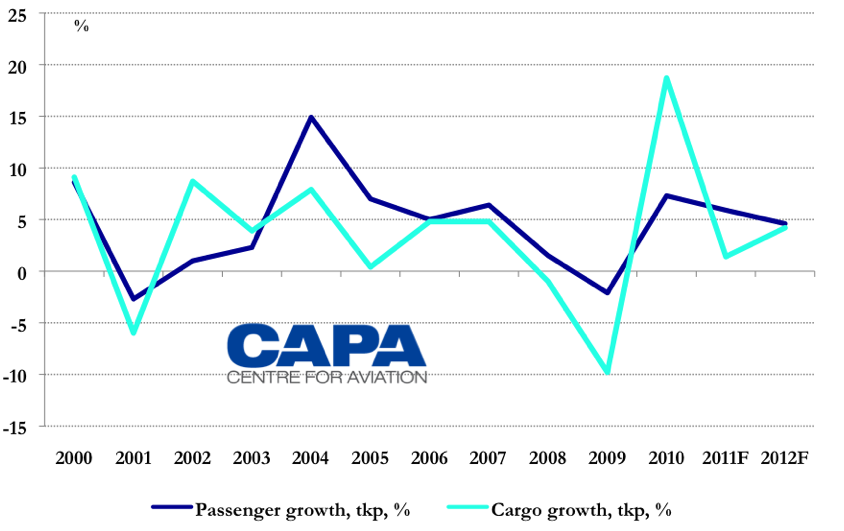 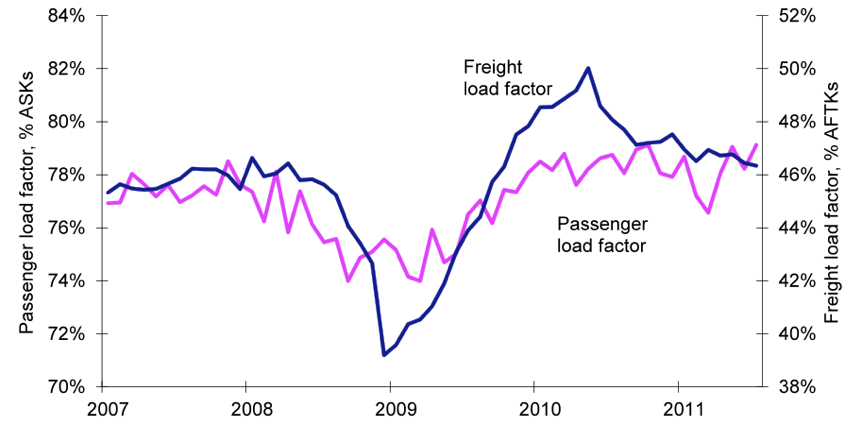 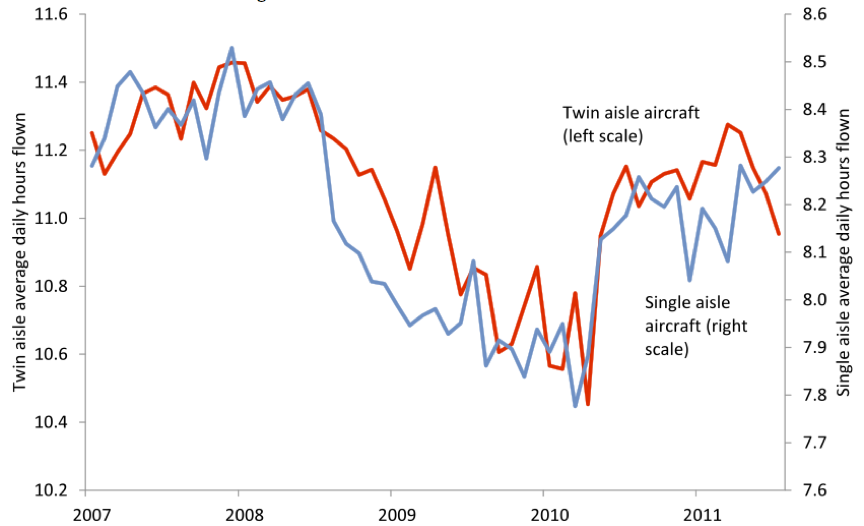