After the shock of last week’s European airspace closure, oil prices have largely recovered their lost ground. Prices on the NYMEX finished trading on 29-Apr-2010 at just above USD83 per barrel, while Brent prices hovered at a little over USD86 per barrel.

Oil prices have traded roughly between USD80 and USD85 per barrel for the past six weeks, even though day-to-day price movements have been volatile, often exceeding USD2 per barrel.

The higher prices are prompting airlines to add or increase fuel surcharges. Lufthansa Cargo moved to increase its fuel surcharges in early Apr-2010. It was followed by its passenger operation this week, with the German carrier announcing a EUR5 per sector increase in fuel surcharges for long-haul services. The fuel surcharge for short- and medium-haul flights remained unchanged, a sign of just how competitive those markets are.

The increase will bump Lufthansa’s fuel surcharges up by 5.4-6.4%, depending on the destination. Middle East and East Africa services will incur an EUR82 surcharge, while North American and Indian destinations will increase to EUR87. Asia Pacific, sub-Saharan Africa and South American flights will all have a surcharge of EUR92 per sector.

In the Asia Pacific, Chinese carriers could soon follow suit, particularly if local oil giant, Sinopec, gets its way. The company increased output by 20% in 1Q2010 (and profits by 40%) but has announced it will lobby for quicker fuel price rises if crude prices continue to increase. The rapid local economic recovery is driving oil consumption, which was up 24% in the quarter.

Sinopec, which purchases 70% of its oil in international markets, is worried that domestic prices, regulated by state-mandated fuel caps, are increasingly being dislocated from international prices. China introduced a new fuel surcharge pricing mechanism in late 2009, which links charges to jet fuel costs. The government had previously set surcharges centrally. 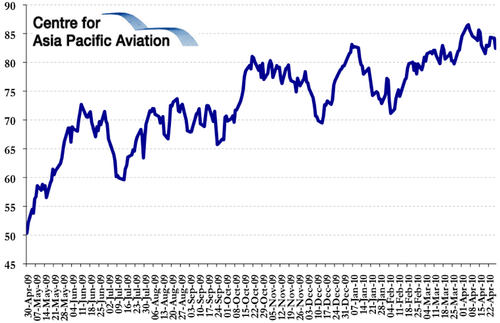 Jet fuel prices (cents per gallon) climbed at all markets, led by a 3.6% increase in Amsterdam as European airlines restored operations after the airspace closures and added extra flights for stranded passengers. 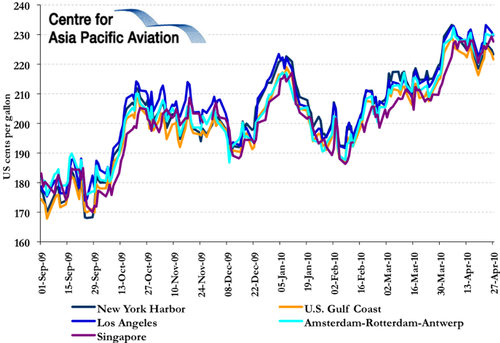