Airline invasion of the US: Gulf airlines extend into the west, Chinese airlines grow in the east

While US airlines focus on traditional domestic housekeeping, they are largely overlooking the bigger, faster growing – but more risky – long-haul international markets. This short termism may well come back to bite them. In their absence Chinese and Gulf airlines are re-shaping international travel to and from the United States. A decade ago they collectively operated half a million annual seats to the US; in 2014 it is over four million. By nature of demand and technical requirements they initially focussed on the US points relatively closer to home, with Gulf carriers planting themselves on the eastern coast and Chinese airlines on the west coast.

But now the two groups are reaching further inland, with Gulf carriers expanding to the west coast. Emirates will up-gauge its San Francisco service to an A380 while Etihad in Nov-2014 will launch a San Francisco service. Chinese airlines are extending their reach to the eastern part of the US, with Hainan Airlines launching Boston, Air China Washington Dulles and China Southern New York JFK. Gulf capacity quickly overtook Chinese capacity, with Gulf carriers in 2014 having twice the seat capacity of Chinese airlines. In recent years the Chinese growth rate has picked up but is still below that of Gulf carriers.

Chinese airlines were in the US first but with flat growth; Gulf carriers grew quickly

Chinese carriers have a longer history in the US than Gulf carriers; they have existed longer, as have their bilateral rights. However, Chinese capacity to the US was relatively flat between 2004 and 2009 at around half a million annual scheduled seats from Air China, China Eastern, China Southern and Hainan Airlines. In 2010 Chinese capacity entered a growth track that would see it record double-digit growth every year since then.

Although late to the party, Gulf carriers gained prominence (and in the eyes of Delta, were unwanted guests) as they grew by at least 20% every year since 2004 except for “slow” 8% annual growth in 2012. Gulf carrier capacity to the US surpassed Chinese capacity in 2008.

Chinese airline and Gulf carrier annual seat capacity to the US: 2004-2014 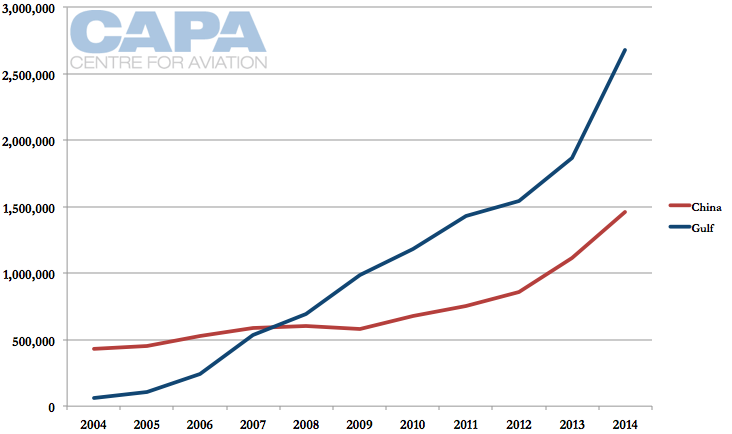 Chinese airline and Gulf carrier annual year-on-year seat capacity growth to the US: 2005-2014 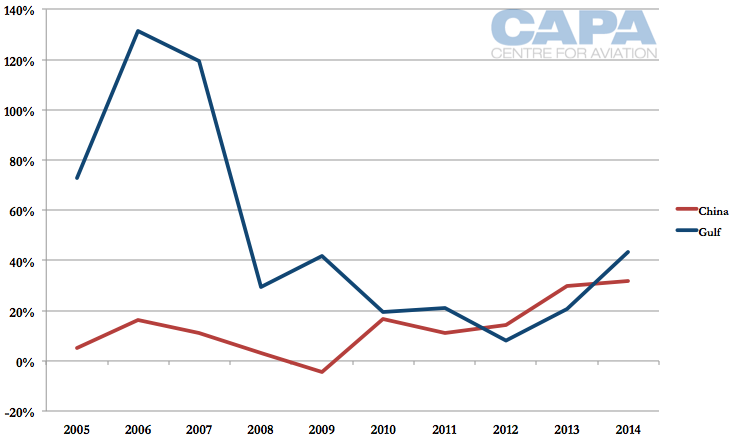 Emirates and Air China define the respective markets, but Etihad and Qatar are growing faster

Chinese airline and Gulf carrier seat capacity to the US: 2004-2014 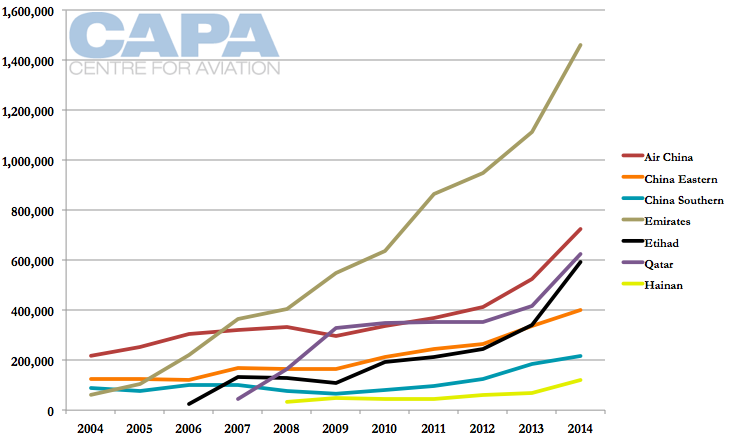 Chinese airline annual seat capacity growth to the US: 2005-2014 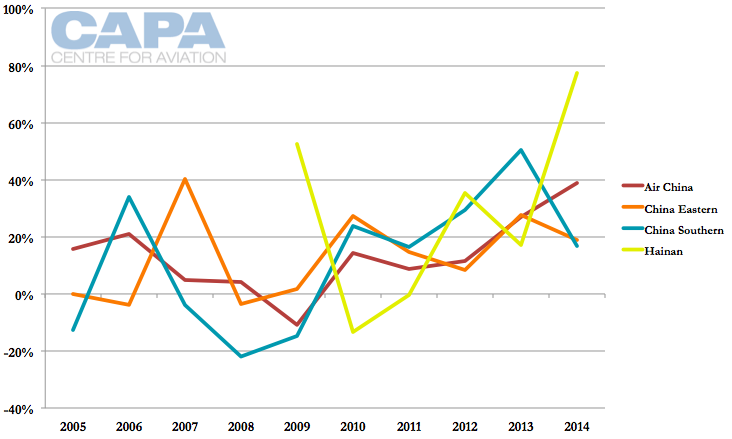 Similarly, in the US-Gulf market it is the smaller carriers, Etihad and Qatar, growing faster than Emirates. Notably Etihad entered the US before Qatar but fell behind Qatar’s growth, although in 2014 Etihad has almost closed the gap with Qatar. 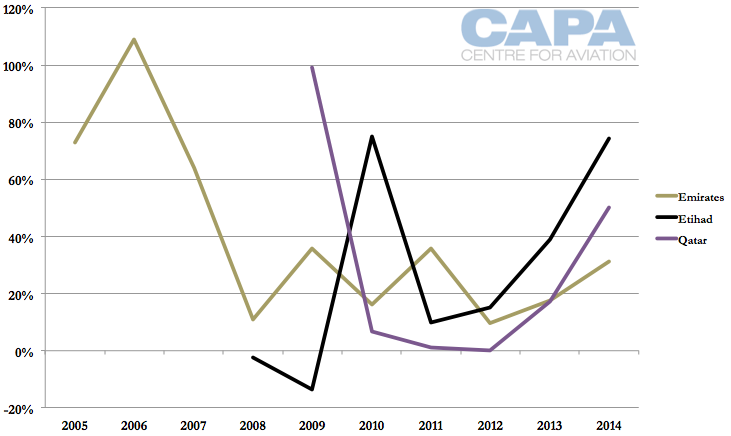 Chinese carriers largely started their presence in the US west coast, where flights are shorter than to the east coast and Chinese communities larger. With time they have shifted eastwards: Air China and Hainan Airlines grew in the central US in 2013 (Houston and Chicago respectively) before growing in the east coast in 2014 (Washington Dulles and Boston respectively).

This excludes capacity up-gauges, which Air China has applied, notably in Los Angeles and New York JFK while China Southern replaced the 777-200 on Guangzhou-Los Angeles with its A380.

Gulf carriers have broadly but not as closely followed this pattern. One explanation could be that the Gulf carriers are dependent on transfer traffic beyond their hubs to the Middle East, Africa and Asia. For many central or western US destinations, Asian destinations have more routing options via an Asian hub than from the east coast. Aircraft can also be a factor, with west coast destinations pushing the operating envelope of aircraft. Consequently airlines needed more time to evaluate performance.

Sheer number of aircraft is also a factor, with Etihad for example having to hold back on growth until it could secure more long-haul aircraft, which it has achieved with ex-Air India 777-200LRs as well as 777-300ERs from Jet Airways (the latter used to add frequency to New York JFK and open San Francisco).

The newest Gulf carrier service is to be a daily Etihad Abu Dhabi-San Francisco flight from 18-Nov-2014 with a 777-300ER, leased from Etihad "equity alliance" partner Jet Airways. The service will originate in New Delhi, providing a New Delhi-Abu Dhabi-San Francisco routing between the Indian capital and Indian community in San Francisco, although this service around the "other" way will compete with trans-Pacific routings from Asian carriers. Etihad in Jun-2014 launched Abu Dhabi-Los Angeles service.

Shortly before Etihad's announcement of San Francisco service, Emirates announced it would up-gauge its San Francisco (and Houston) services from 777-300ER to A380 from Dec-2014.

Relations between US carriers and their Chinese and Gulf counterparts are starkly different, and tend to be more hospitable towards Chinese airlines. This is perhaps because Gulf carriers can stand better on their own whereas Chinese carriers need feed and welcome international experience; in contrast it is the Gulf carriers teaching the rest of the world about experience and standards.

China is also a growing destination for US carriers whereas the Gulf and Middle East is not (if anything, it is a shrinking market for US carriers). The need of US carriers for local partners in China creates reciprocity whereas that imperative is lower in the Gulf, even though Gulf carriers are open to partnerships. Even Emirates, usually independent, has pushed for a major deal with American Airlines. American is looking to not burn bridges, working with Etihad Airways and more recently Qatar Airways (a result of Qatar joining American in oneworld). United is taking a more or less neutral stance, while Delta is leading the anti-Gulf rhetoric – despite its own extremely limited long-haul international operations.

The three US carriers have close relations with Chinese counterparts. Star Alliance's United Airlines is with Air China, although Air China sees itself doing more for the partnership than United. SkyTeam's Delta works with China Southern and especially China Eastern, the latter involving staff exchanges. Oneworld's American is more distant, not having an alliance partner, but has a growing bilateral relationship with the neutral Hainan Airlines.

It is the Gulf market capturing attention and size. They possess unquestionably the best global flight products and increasingly offer networks and frequencies that are hard to beat. There is seemingly much more to come, despite efforts from some US carriers to exclude their Gulf guests, especially as they are so popular with US travellers more used to flying domestically in 20-year old aircraft.

In fact, with Gulf carriers creating more city pairs in Middle East, Africa and Asian markets than US carriers, it is the US carriers that may find themselves unwelcome.

They need a new party trick; if you can't beat them, join them. Even some of the staunchest European opponents have adopted this course. There certainly doesn't seem to be much depth to, or future for, a strategy that seeks to exclude competition while not offering an alternative product.