A deterioration in consumer confidence and a concerning economic outlook is placing further pressure on the world’s airlines, with IATA warning of a possible slowdown in business travel. The association also noted that airline industry earnings suffered the first year-to-year decline for two years in 2Q2011, based on a small sample of airlines globally, while airline share prices have taken a battering, weakening 15% this year on economic concerns. Meanwhile, high jet fuel prices continue to pressure airlines, which are also now faced with a moderation in travel volumes, weakening load factors, softer utilisation rates and yields which are yet to recover to their pre-recession levels.

IATA, in its Jun/Jul-2011 Airlines Finance Monitor, stated airline share prices are 15% down so far this year, compared with a 1.6% rise in equity markets over the same period, as airlines continue to be hit more than most sectors by the economic slowdown

The Bloomberg global airlines index was down 4% last month, while equity markets declined 0.5%. IATA noted that in the past month confidence in the economic outlook has deteriorated. Debt and inflation forced governments to tighten economic policy and business confidence declines. 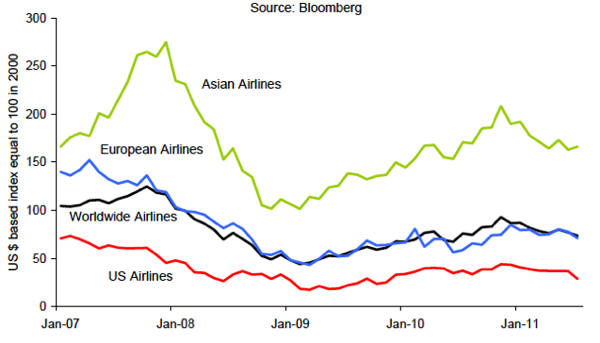 IATA reported that jet fuel prices headed back up above USD130/barrel last month, despite concerns about the strength of the economic expansion and after previously trending downwards from a peak in Apr-2011. Worries about supply, including the situation in Libya, have more than offset potential demand reductions. So far this year Brent oil prices have averaged USD112/b and jet fuel USD128/b, which are close to the levels IATA assumed for the year as a whole. Current prices are USD6-7/b higher. 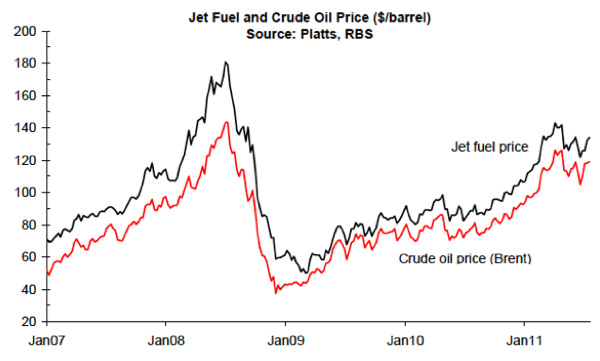 The effect of rising fuel prices on profitability was seen in 2Q2011. IATA noted that early results on 2Q2011 airline financial performance shows, with the exception of Europe, the first year-on-year fall in profits since 2Q2009.

After losses of USD1.8 billion in 1Q2011, net profits in 2Q2011 for the small sample of 16 airlines reporting so far total USD1 billion. IATA noted that while the sample is too small as yet to come to clear conclusions, it has highlighted that “Asian airlines appear to have been under most pressure, whereas European airlines have improved operating profits (partly because 2010Q2 results were hit by the ash cloud last year)”.

IATA, when it halved its forecast for airline industry net profits in 2011 to USD4 billion in Jun-2011, stated the cost of fuel is the main cause of reduced profitability for the industry in 2011. IATA raised its forecast for the average price of Brent crude from USD96 to USD110 per barrel (Brent), marking a 15% increase over the previous forecast.

On a more positive note, Director General emeritus Giovanni Bisignani stated the industry has “built enormous efficiencies over the past decade. In 2001, we needed oil below USD25 per barrel to be profitable. Today, we are looking at a small profit with oil at USD110 per barrel.”

Passenger yields back to pre-recession levels in US; remain 10% weaker industry-wide 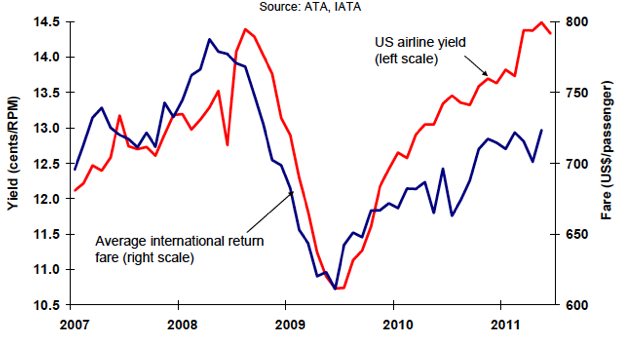 Deliveries of new jets and turboprops remained above 100 aircraft in Jun-2011, with these aircraft joining by an increasing number of aircraft being taken out of storage. The impact on capacity of these new deliveries has been held down for much of this year by a fall in the utilization of the existing fleet.

With over 1300 aircraft scheduled to be delivered this year, representing an additional 5-6% of the existing fleet, the pace of new capacity additions is expected to increase over 2H2011. This will have a positive impact on fuel efficiency but potentially impacted fleet utilisation and hence profits. 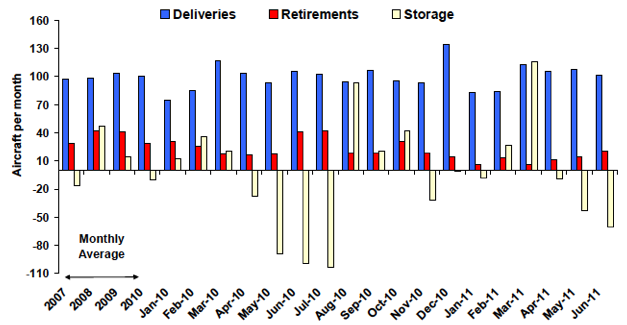 Air travel markets are now above pre-recession peaks, although the trend rate of improvement has slowed since 4Q2010 and volumes dipped lower in Jun-2011. The trend in air travel volumes looks to be expanding at a pace of 4-5% p/a. IATA also commented that the recent sharp falls in business confidence are a worry, since business travel has been a major growth factor. This is also a concern for air freight markets which remain stagnant, below the 2010 peak.

Meanwhile, capacity continues to be introduced onto air travel and freight markets at a faster pace than the growth in demand. The trend in capacity on passenger markets has slowed a little but remains over 5% a year so far, with published schedules suggesting growth in capacity at a slightly faster pace this year, according to IATA. 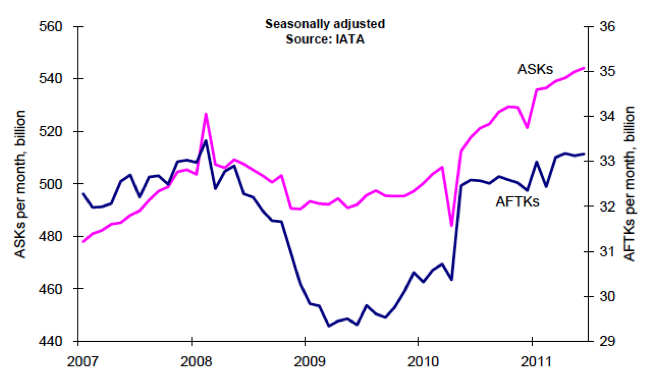 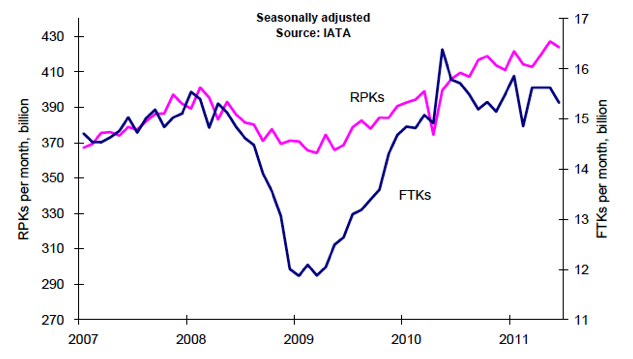 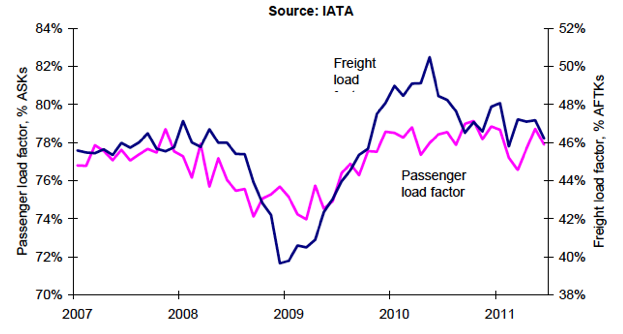