The world’s full service airlines face a couple of unpleasant options; ground aircraft, or reconfigure them with fewer premium seats, as the global downturn in passenger traffic shows no signs of reaching a bottom.

Latest data from IATA reveal airline revenues are also falling at a “significantly” faster pace than passenger numbers, as fares are being cut in the face of sharply falling load factors and because premium ticket sales (which make up a higher proportion of revenues) have been weaker than the Economy section.

According to IATA, premium tickets make up 7-8% of total passenger numbers on international markets, but 25% of revenues. These proportions are considerably higher in the Asia Pacific region, which faces considerable upheaval. The industry body estimates revenues from premium tickets have been falling at a rate of 35-40% during the first quarter of 2009. 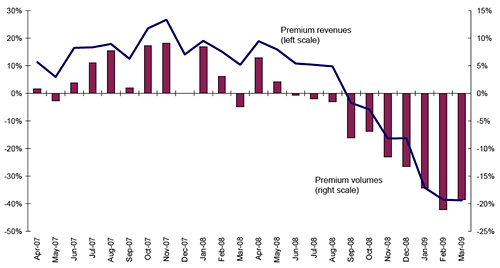 This is having a devastating impact on carrier profitability. One of the world’s best managed airlines, Singapore Airlines, suffered a rare first quarter operating loss as yields slumped, while US carriers have reported unprecedented reductions in international yields in April, suggesting IATA’s April premium traffic/revenue numbers could be even worse. Qantas reported a hammer blow on yields in March, while Air New Zealand has put 1,000 staff on a salary freeze as its yields deteriorated sharply in April.

Premium traffic down 25% in March (adjusted for Easter)

According to IATA, passenger numbers travelling on premium tickets was down 19.2% year-on-year in March, compared with the previous month’s decline of 21.1%. Adjusting for the leap year and Easter, premium traffic is falling at an accelerating rate of decline, to around -25% in March.

IATA stated, “business confidence is improving and world trade appears to have bottomed but the travel data is consistent with the view that business expectations of recovery remain weak while consumers remain concerned about job security and their highly leveraged balanced sheets”.

Premium travel on markets connected to the Asia Pacific region remained the weakest in March, with falls of 29.3% across the Pacific, 29.2% within the region and a fall of 20.1% between Europe and the Far East. IATA noted Easter will have had “less of an impact on traffic in this region, and so the underlying decline is rather worse than the headline figures”. 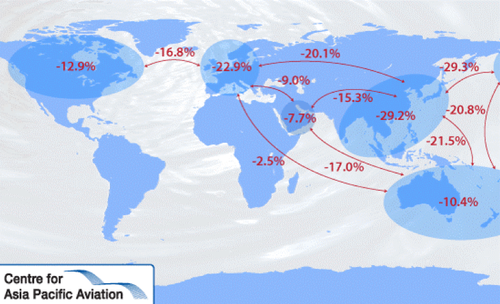 Middle East-Far East traffic also fell at an accelerated pace (-15.3% vs -14.5%) so the further decline in passenger travel is due to still falling overall passenger decline and not a diversion of traffic via other hubs.

Atlantic still struggling, some signs of “bottoming” within Europe

Across the Atlantic market, there was a moderation from -22.5% to -16.8%. Even after adjusting for the leap year and Easter this market did show a slower pace of decline in March, “possibly reflecting the stronger improvements in business confidence in the US”, according to IATA.

A similar performance was seen in the within Europe market, where premium passenger numbers slowed from a 27.1% decline in February to a 22.9% decline in March. IATA stated this shows there were “some tentative signs of the decline in business travel bottoming out in some markets”. 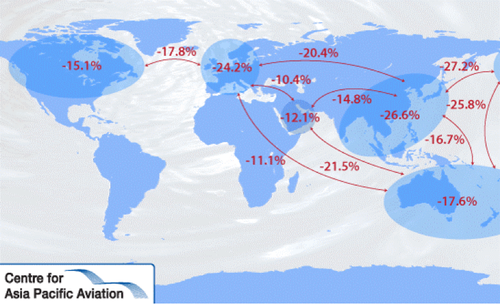 IATA contends that while world trade has stopped declining, there is still no recovery in final demand, or the near term prospect of one. As a result, “firms are not yet increasing business travel to develop new business. In other words, this is signalling further economic stagnation”.

For airlines holding out for economic recovery, the prospect of stagnation means it is back to the capacity planning drawing board. The knives are likely to come out once again.