Airbus and Boeing have both gone through major changes during the past year. Airbus has taken a stake in the Bombardier CSeries, changed the aircraft’s name to the A220 and given the programme a shot in the arm with its sales heft and support. In response, Boeing is pursuing a tie-up with Embraer and remains optimistic that the proposed JV will come to fruition.

Boeing is also signalling that it will render a decision regarding a clean-sheet middle of the market aircraft in early 2019 as work continues to establish a business case for a new aircraft programme.

Even as Airbus and Boeing each take steps to ensure that their product portfolios encompass smaller narrowbodies, the trend towards aircraft upgauging continues.  Airbus is forecasting solid growth in the number of deliveries of narrowbodies with more than 180 seats over the next few years.

Boeing has, for more than two years, been discussing a possible middle of the market aircraft to replace older 757s and 767s and Delta Air Lines has expressed an interest in becoming the launch customer for the aircraft.

Now that Airbus has taken a stake in the CSeries, Delta’s order book has tilted heavily toward Airbus, with the European manufacturer representing 86% of the airline’s aircraft on order. (That includes 75 Airbus A220-100s, a type that was formally the Bombardier CS100)

Delta Air Lines percentage of aircraft on order by manufacturer, as of mid Oct-2018 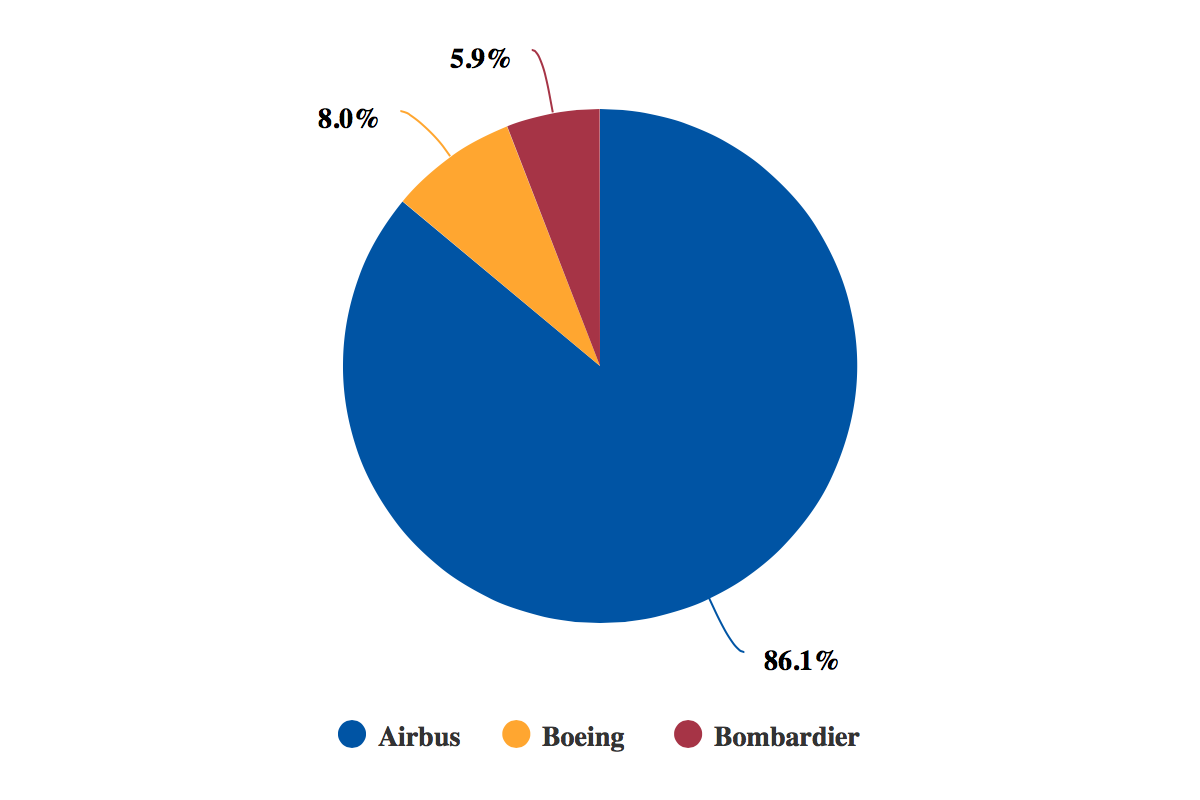 Speaking at the recent CAPA Latin America Aviation and LCCs Summit, Boeing Managing Director of Marketing James McBride stated that the company was continuing to study a middle of the market aircraft and hopes to make a decision early next year. Mr McBride said Boeing has discussed the potential new aircraft with 60 customers worldwide.

What’s set to cause the next wave of disruption on North-South markets?

Mr McBride concluded “we’ve almost gotten to the limit” of current generation single aisle aircraft. “The engines want to get bigger and the fuselages want to grow”, he stated.

Boeing could bring new wing technology to the marketplace to produce an aircraft with a range of 5000nm, which is critical for some of the large North America-South America markets. He also explained that Boeing believed it could bring CASM down significantly on some of the larger flow markets between those two regions with a family of aircraft featuring up to 270 seats.

While Boeing remains excited about the opportunity for a middle of the market aircraft, “there’s still some due diligence to do", said Mr McBride.

Airbus won a key victory earlier in 2018 when JetBlue and the US start-up Moxy ordered the A220.

Bombardier has always faced challenges in Latin American sales, given that Brazil is home to its rival Embraer. During the Summit Airbus VP of Marketing Latin America & Caribbean Paul Moultrie was asked about the A220’s prospects in the region. He remarked that the A220 provides operators an opportunity to develop thinner routes, and the general trend in Latin America is operators opting to upgauge from A320s to A321s, given the congestion and constraints.

He acknowledged that Bombardier had not had a lot of success in the region with the CSeries (now the A220), but stressed that was not because of the aircraft itself, but stemmed more from questions regarding the support network Bombardier could offer for the aircraft.

With the CSeries, Airbus is rounding out its narrowbody aircraft portfolio; however, the airframer continues to receive meaningful orders for upgauging in its narrowbody products. Mr Moultrie stated that five years ago 2% of single aisle aircraft delivered in Latin America were A321s; by 2016 A321s represented 45% of deliveries.

He said that upgauging is the trend among airlines worldwide, citing the US as an example where Airbus has sold more A321neos than A320neos.  Mr Moultrie also highlighted that five years ago there were zero A320s delivered with more than 180 seats. By 2020, approximately 50% of A320 narrowbodies delivered will feature 180 seats or more.

Stage lengths of narrowbody jets also continue to grow. Mr Moultrie remarked that during the past five years the number of routes operated with A321s longer than 2000nm had grown by a factor of four.

Mr McBride stated that Boeing was optimistic the deal would gain approval, and Boeing and Embraer were planning integration activities.

Mr McBride stated that there were opportunities to bring in Embraer’s Lean design – which the Brazilian manufacturer is “very good at” – and working at vertical integration.

Brazil has, on 29-Oct-2018, elected a far right candidate in Jair Bolsonaro. It is yet be seen how an administration of Mr Bolsonaro will view the potential tie-up but many investors hope he will steer Brazil into more business friendly policies - at least in the case of the Boeing-Embraer tie-up.

However, it cannot be certain yet just how a president with an overtly nationalist bent would view Boeing’s involvement.

Airbus and Boeing have made major moves during the past year to invest in smaller rivals in order to ensure that the larger companies maintain competitive aircraft portfolios.

Bombardier has already gained some major wins from Airbus loyalists, and Boeing believes it can gain some manufacturing efficiencies from Embraer while ensuring it remains competitive with Airbus in the small narrowbody aircraft segment.

As Boeing pursues its JV with Embraer, it is also on the cusp of making a key decision regarding the 757/767 replacement, and operators worldwide are watching the outcome.