The airline industry has been starved of aircraft for several years because of production difficulties, according to Aircastle CEO Ron Wainshal, who spoke before the JP Morgan Aviation, Transportation and Defence conference, yesterday. He also said that aircraft bank financing is limited to new aircraft being bought by airlines with great credit, leaving a huge market potential for aircraft leasing companies as the financial sector continues to recover.

He echoed his counterparts at the International Society of Aircraft Traders (ISTAT) conference saying the Airbus NEO “or whatever Boeing plans next,” will have little impact on current aircraft values in the narrow-body space. He told investors that Aircastle has been negative on classic-generation narrow bodies for two to three years and the NEO has nothing to do with that. It was the peak of oil at USD150, followed by the deepest recession in history which drove them out of the fleets. The current parked fleet is 20% classic narrow bodies which, he emphasised, has an impact right now, not in 2016 when NEO deliveries commence.

“We’ve obviously got the NEO and Boeing is talking about something, perhaps all new, later,” said Mr Wainshal. “Here’s my perspective: You typically get 25 years of life for an airplane. These are general, generic assumptions. But whatever it is, whether it is a 737-8 or an A320 or an A330, it doesn’t matter, you are much more exposed and reliant on getting that revenue flow from rents and residuals when there is something new or better out there.

“If you buy off the first part of the line, you are likely get that 25 years, maybe more,” he continued. “These are simplifications. If you look at the current production engine of an A320, even if you look out to the NEO’s entry in 2016, you’ll have a 20-year run and probably longer for the Boeing NG or whatever comes to replace it. That is a really long run. The classics were made for 14-15 years. And, you have a huge installed base for the 320 or the 737NGs. My outlook for values is even more bullish because the growth in the world, certainly on a long-term basis, hasn’t abated. I see the delay of introduction of new technology as a good thing. Do I want to buy something last off the line? I’d want a good price for it because I’m expecting depreciation to be a little higher, but I still like the first part of the production run for both these new narrow bodies.”

He was forceful when he said that B777 and B767 production has caused constraint in that market segment which only serve to keep values high.

“The 787 will show up and it will be a fine aircraft, but that will take awhile,” he explained, adding that mid- and wide-body aircraft values have been more volatile than narrow bodies, although all sizes have turned the corner with considerable upside in the high-quality, mid- and wide-body aircraft. “Meanwhile, the A330 and anything in that space has benefited so the A330 will be good for a long time, even after the 787s shows up. But, if you look at it, Boeing hasn’t been making much of the 767 for awhile while Airbus has been making a constant flow of A330s, so that market has been starved of product for about four years. That’s a pretty good dynamic.”

Mr Wainshal said the same thing has happened on the freight side, where Aircastle has 33% of its assets. “The 747-8 was going to be a big force, but it hasn’t shown up either,” he said. “The 777 freighter capacity has been starved in order to supply 787 guys with passenger aircraft. So the freight side of the story is also starved for product. While these are not 20-year benefits, they are benefits over the medium term, not just the short term.”

While banks have been fueling sales of new aircraft, that has left large opportunities for lessors, the sweet spot for which is mid-life aircraft. But continuing financial problems in Europe will keep that sector depressed for a while.

“The bank market is profoundly different than it was two years ago,” he said. “Pre-crisis there were probably four- to five-dozen aerospace banks that funded on an asset-specific basis and we are probably down to two to three dozen now,” said Mr Wainshal. “Many are in Europe and many, if not all are extremely risk averse, even now. It will be years before that comes back to what it was before the crisis. Banks are only funding what they consider low risk - newer airplanes with a focus on narrow bodies and better credits. That is what has fueled the resurgence of money into the new-aircraft space.

“There has been a lot of private equity into our space and a return by traditional big guys for new aircraft because they can get financing,” he continued. “There has also been money in the lower end of the market that we see as the part-out market but that has been less reliant on financing since those are cash-on-cash transactions. Meanwhile, the middle market has relied traditionally on small, one, two, and three aircraft for mid-tier and small-tier lessors where bank financing is hard to get or not available at all. That will take awhile. Like anything in finance, it will recover but it is because the centre of gravity is in Europe which continues have fundamental long-term issues that will mean it is going to be a slow recovery.”

North America not a friendly market

Mr Wainshal, who only has 10% portfolio exposure in North America, said the market has not historically been good to lessors. Even so, Aircastle is interested in increasing its presence there.

“There are good opportunities there, but there are also limitations,” he explained. "US airlines have very good capital market access and a few more arrows in their quivers compared to other parts of the world. However, given the lessons of the downturn which suggest an airline probably does not want to own everything long term, there is a role for leasing. There is a huge, pent-up opportunity the question is when will that product come on line and how do leasing companies tap into that.”

However, his colleague, FLY Leasing CEO Colm Barrington, who spoke after Mr Wainshall, put a different spin on the North American market. “Lessors have had a bad experience there because the legal system is more supportive of the airlines than it is of the financiers and lessors,” said Mr Barrington, in recounting the impact of the bankruptcies and restructuring that has taken place in North America since 2000. “Because of the availability of capital markets and attractive financing, they take an aggressive stance against operating lessors because of the security deposits and maintenance accruals. It’s a manhood issue for them. They just don’t want to pay them.”

With 16% of its portfolio in North American, Mr Barrington views the market with caution. “If we can get decent terms we would be interested,” he concluded. “but we have to get the right terms before we go plunging in.”

Aircastle is quite bullish on freighters. “Freight has come back from a very bad place at almost 20%,” said Mr Wainshal. “In context with where we are now from the pre-crisis levels, freight is back more than four times the recovery experienced on the passenger side. The emerging markets are driving both passenger and freight growth. Last year was the first year intra-Asia travel superseded North American travel and world traffic is estimated to grow between 5-6% this year. Freight is more closely correlated between GDP and rents. It has come back very strong. The supply and demand relationship is more favorable because a lot of the old aircraft were parked during the downturn whenever they faced a heavy maintenance check. Now there is a real shortage.”

He also noted that passenger traffic is heavily impacted by worldwide scares such as terrorism or health issues such as SARS but boxes don’t care. In addition, freight companies enjoy good credit meaning they experienced no problems during the worst recession freight has ever faced. Mr Wainshal concluded by saying that freighters last longer, there was less depreciation and transitioning an aircraft from one carrier to another was far simpler than is the transition of a passenger aircraft. Aircastle’s top customers for freighters are Emirates and KLM subsidiary Martinair.

CFO Michael Inglese indicated that with its balance sheet and continuing strong demand for both freighter and passenger aircraft, rental rates are rising and the company “could put to work another USD500 million to USD1 billion in 2011, if the economics work in the context of financing availability.”

Mr Inglese indicated the company was seeing the economics for the passenger 747 closing providing more opportunities for conversion to freighters. “We won’t grow for the sake of growth,” he told investors. “That doesn’t make sense to us. We will only grow if it contributes to our cash profile. We are not adding assets just for the sake of adding assets.”

Mr Wainshal recounted the outlook for leasing when he reported that long-term growth was expanding the industry at a multiple of global GDP. Passenger and freight levels recovered sharply during 2010 with passenger traffic up 7.3% compared with 2009 and freight traffic surging 18.3%. Both are now above pre-crisis levels. He also pointed out that traffic is expected to grow faster than GDP.

He said load factors were driving interest in aircraft acquisitions having reached record levels last year. In addition, there were very low levels of parked aircraft. In fact, current-technology aircraft were only 1-2% of the parked fleet and the shortage is particularly acute for freighters.

“That’s like having a 0% unemployment rate,” he said. “Higher load factors and limited parked aircraft drive lease rates up. Rental recoveries for new-generation narrow bodies are recovering slowly but they are still far from peak levels. There is a more pronounced recovery for wide bodies driving by the return of premium business travelers, 787 delays and limited 767 production. 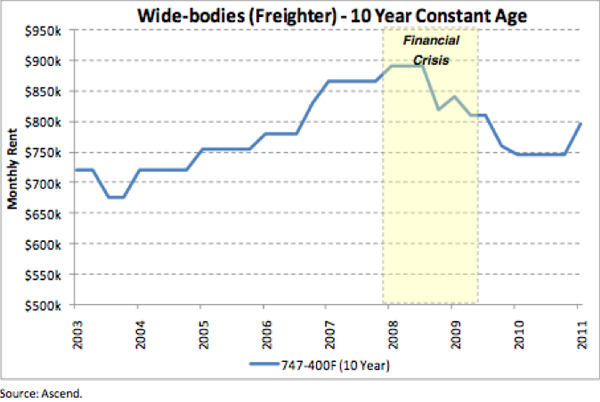 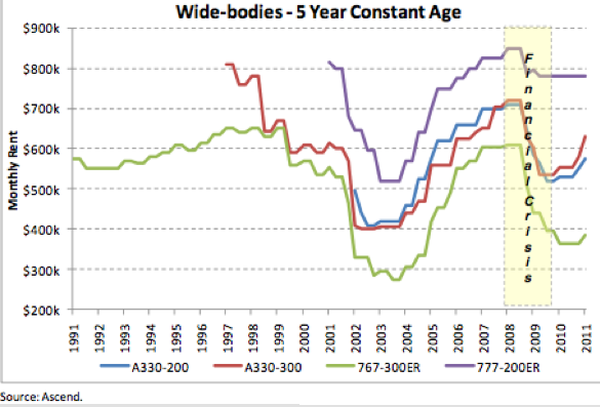 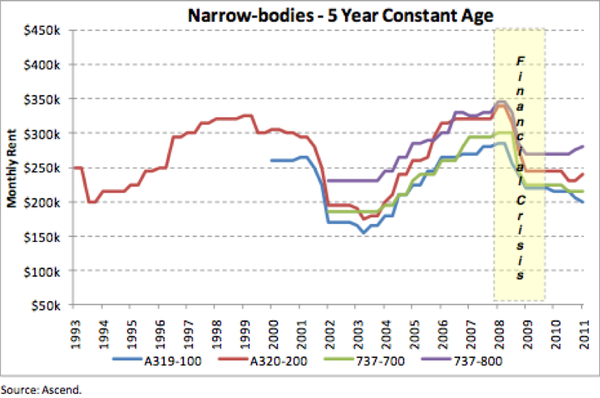