Airbus and Boeing will this year make more aircraft deliveries than they receive orders, if latest predictions from the manufacturers play out. (This will be the first time this has occurred since 2003). Airbus is predicting 300-400 new orders this year, including ten A380s, while deliveries are expected to hold at last year's record level of 483. 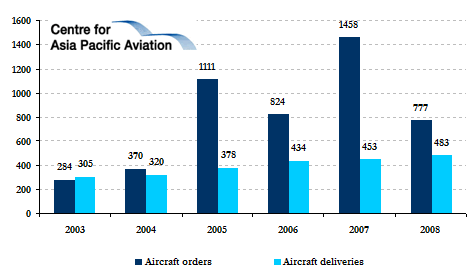 Boeing too is facing an orders downturn, while its output (375 deliveries in 2008) should pick up in 2009 following the impact of the machinists' strike in 4Q08. But Airbus will maintain its deliveries edge on Boeing, as it has every year from 2003. 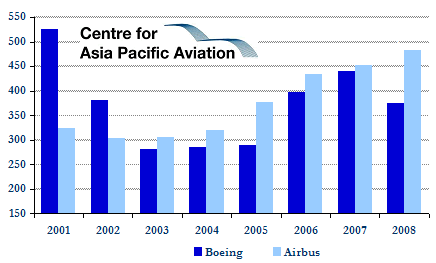 Airbus stated its order intake in a difficult year in 2008 was "remarkably strong", with 777 net orders (900 new gross orders) valued at USD100 billion at catalogue prices. 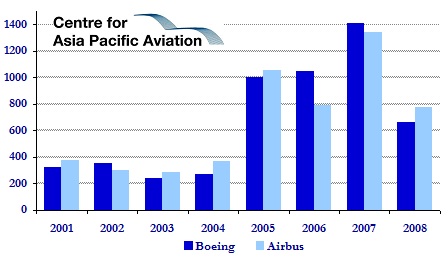 Airbus' strong year helped it claim 54% of all aircraft sales over 100 seats.

Slowdown in orders late in 2008

The slowdown in new orders in the final quarter will however be of concern to Airbus, which booked new (gross) orders for 115 aircraft in the period (or 12.8% of the annual total). 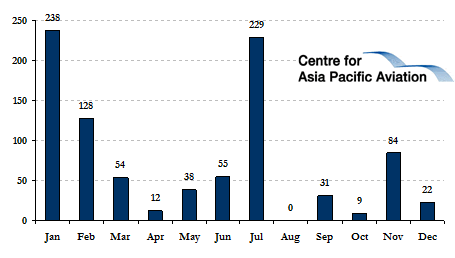 Boeing also experienced a marked slowdown in orders as the year progressed. 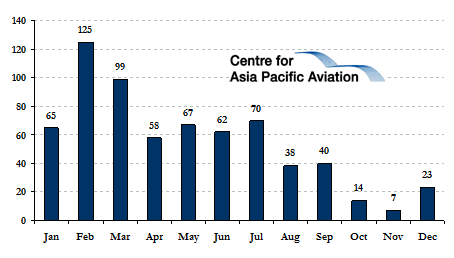 Airbus' normally high 123 cancellations for the year was a negative for the manufacturer, with 75 coming in the final quarter alone (or 61% of the year's total). Boeing had just seven cancellations last year.

The manufacturers are keeping a close eye on deliveries this year and are ramping up pressure on airlines to take delivery of the aircraft they have committed to. Airbus COO, John Leahy stated that airlines seeking to push back deliveries of aircraft from 2009 would get a "no" from Airbus. In Jul-08, Cathay Pacific CEO, Tony Tyler admitted it is very expensive to defer aircraft deliveries. He said, "manufacturers can hold your feet to the fire, and they tend to do that".

China Eastern Airlines is the latest carrier to announce plans to defer aircraft deliveries this year, hoping to cut total deliveries from Airbus and Boeing from 29 down to 14.

For the manufacturers, it is expensive to alter production rates, although the introduction of too many aircraft into airline fleets amid a downturn can hit aircraft prices. Airbus CEO, Tom Enders expects the level of deliveries to be in the "same ballpark" as the 2008 record, but the manufacturer had drawn up contingency plans to cut output if necessary. Airbus is also prepared to finance aircraft deliveries this year, but would do so "cautiously".

Overall, the party is over for Airbus and Boeing - the aircraft order bubble of the past four years has burst. 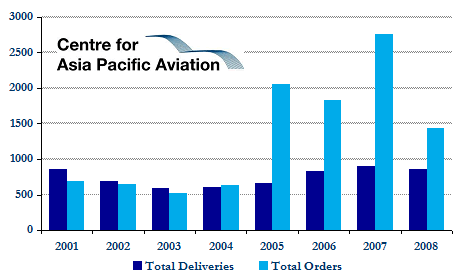 British Airways CEO, Willie Walsh, told the Financial Times recently, that access to funding is increasingly difficult and he expects to see airlines cancelling or delaying orders for new aircraft. He added, "many airlines were forced to take similar action after 9/11, but at that time banks were prepared to make funds available to stronger airlines. Now airlines will have to dig deep to find the funds to pay for aircraft".

It remains to be seen how deep airline pockets really are. Many will be turning to their governments for support. It is probable that significant numbers of aircraft ordered in recent years may not get built. Overnight, engine manufacturer GE Aviation has joined Boeing in announcing over 1,000 job cuts. The industry appears to be preparing for the worst.