After several days of falls (including a 4.0% drop last Friday), Airbus parent, EADS, saw its share price rebound somewhat on 25-May-2009, climbing 2.6%. Military rather than commercial orders have boosted its share price lately. It was reported over the weekend that the Indian military has selected a derivative of Airbus' A330 for its USD1 billion aerial tanker contract.

Other news on military tanker programmes is less promising for EADS. Progress on the competition with Boeing for a new US military aerial refueling tanker appears to have stalled, regarding oversight of the controversial USD1.5 billion contract.

Meanwhile, shares in Canadian simulator supplier, CAE, fell 1.3% yesterday, continuing the downwards trend it has seen since early May. On 14-May-2009, the company announced its financial results, prompting a small rally on news that it plans to cut up to 700 staff and restructure some operations to deal with the global financial downturn. 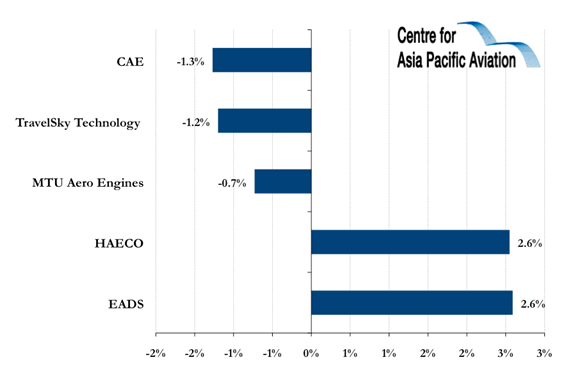