Airberlin delivered a 14% year-on-year increase in EBIT in 3Q2013, recording a positive quarter for the first time this year. The quarter also saw airberlin’s first reduction in unit costs (CASK) this year, reflecting good progress in the cost-cutting aspects of its Turbine restructuring programme.

However, the quarter also saw airberlin’s weakest RASK performance of 2013 and profits were not sufficient to restore a positive equity position to its fragile balance sheet. As a result mainly of a weak pricing environment, it has abandoned its previous FY2013 target for a breakeven EBIT result and set a softer target for year-end net debt reduction.

Airberlin CEO Wolfgang Prock-Schauer told analysts on the 3Q conference call that the relationship with Etihad was for the long term and that it “gives us time really to restructure the company properly”. This commitment looks likely to be tested again soon.

Airberlin's EBIT up 14% in seasonally strongest quarter, but not strong enough

In 3Q2013, airberlin reported a net profit of EUR101 million. This was 4% below the restated figure of 3Q2012, but 52% above the figure reported this time last year. The operational profitability of the group is better reflected in the EBIT result, which improved by 14% to EUR116 million.

The third quarter is typically the strongest period of the year and 3Q2013 was no exception. However, it was not strong enough to offset losses recorded in 1H2013. The EBIT for the first nine months of 2013 was a loss of EUR81 million, worse than the EUR78 million loss for the same period last year. This has led airberlin to lower its guidance for FY2013. 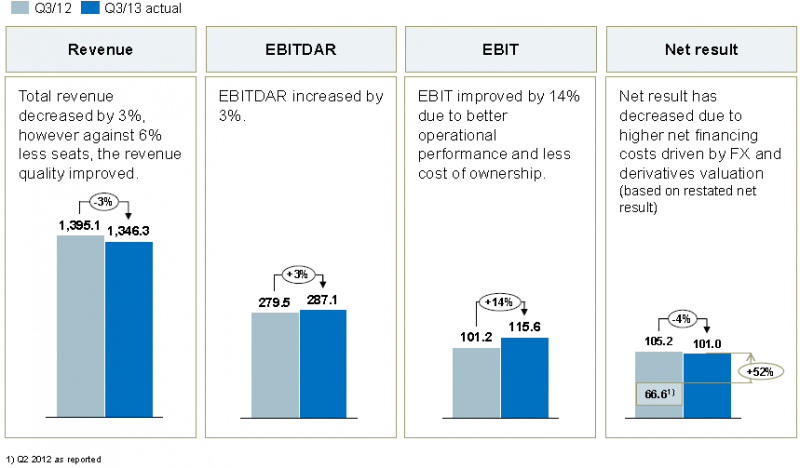 Airberlin’s balance sheet remains frail, although the profits of 3Q have reduced its negative equity position from -EUR116 million at the end of Jun-2013 to -EUR6 million at the end of Sep-2013. Airberlin had previously been confident that this would turn positive in the second half as a result of 2H profits and a reversal of negative market to market valuations of derivative hedging instruments.

Airberlin says that its book equity represents a “momentary snapshot” and “has no effect on the operations” of the group and that “any necessary investments are sufficiently secured through the available cash levels”. Nevertheless, its equity position is fragile to say the least. 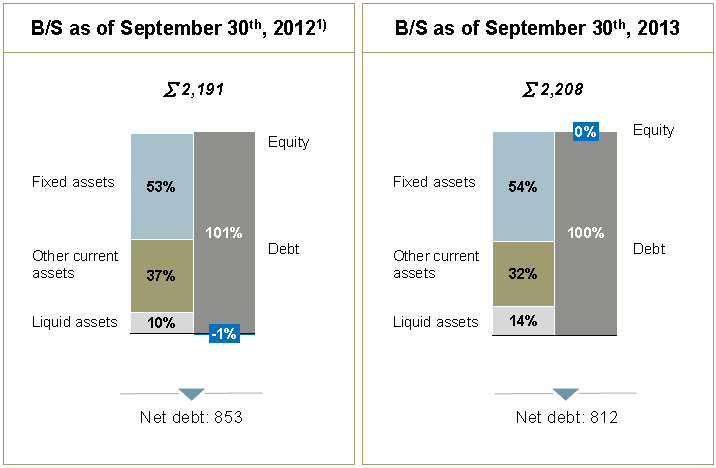 Compared with 12 months earlier, net debt fell by EUR41 million to EUR812 million at the end of Sep-2013. The group says that aircraft disposals after the end of the reporting period have lowered net debt by a further EUR131 million, but its previous year end target for net debt to fall to EUR500 million has been replaced with the less ambitious figure of EUR650 million. Even this new target will require further asset disposals (which are currently planned).

This cash balance is equivalent to only around four weeks of revenues, leaving a small cushion against unexpected events and demand shocks. Asset disposal plans that are already in place will help in this respect, but the increased year end net debt target suggests that the implementation of these plans is slipping (and/or that they cannot be realised in full).

Moreover, airberlin needs to set the business on course that can lead to sufficient operational cash flow to cover its investments without the need to raise funds from asset sales or investors. Meanwhile, it would seem that a further cash call on shareholders cannot be ruled out. The shareholder loan from Etihad still has a three digit EUR million figure of headroom, according to airberlin CFO Ulf Huettmeyer on a conference call to discuss the 3Q results.

Flight revenues, which made up 94% of the total, fell by 3.5%, in line with total revenues. Flight revenue per passenger gained 2.2% to reach EUR124.9, but this was offset by the fall in passenger numbers.

The 0.5% growth in total revenue per ASK (RASK) in 3Q was the weakest so far this year: 1Q saw RASK up 9% and 2Q up 5%, perhaps reflecting the lesser capacity cut. This suggests ongoing underlying pricing weakness in airberlin’s markets in spite of a modestly improving economic backdrop.

3Q CASK performance was the best so far in 2013

Operating costs fell by 4.9% compared with 3Q2012 (including depreciation), more than the reduction in revenues, but a little less than the 5.8% reduction in ASKs. The EBIT result improved because costs fell more quickly than revenues.

The overall reduction in costs was helped by a falling fuel bill, down 9.7%, faster than the reduction in ASKs, while non-fuel costs fell by only 3.1%.

Labour costs increased by 0.7%, mainly reflecting one-off charges due to headcount reductions within the company’s Turbine programme and salary increases. Employee numbers at the end of the quarter were 5% below their level a year earlier and this should lead to future cost savings.

Airport and handling charges fell 9.4% in spite of increased fees in Spain, while navigation feels were only a little less than flat as a result of detours caused by strikes in France. Leasing costs fell more or less in line with capacity. Catering costs grew modestly due to the increased proportion of long-haul passengers.

The 19% increase in Other expenses for materials and services largely reflects costs related to the purchase of bonus miles from the topbonus FFP, a 70% stake in which was sold to airberlin shareholder Etihad in Dec-2012. 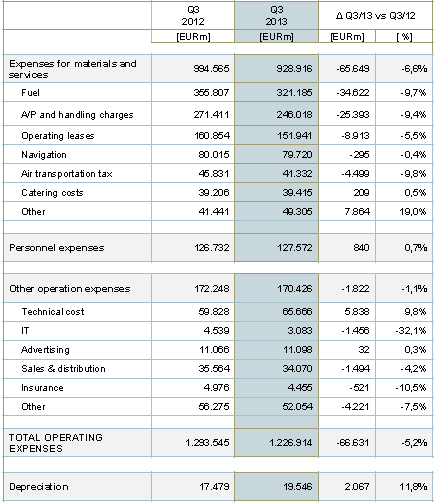 Costs per ASK fell by 1.1% in 3Q2013 compared with the same period a year earlier, while ex fuel CASK increased by 1.2%. The quarter produced the best CASK performance so far this year, after a 9% increase in 1Q (excluding turnaround and other extraordinary costs) and a 4% increase in 2Q. This suggests that the Turbine programme may be starting to have an impact on group costs.

Codeshares with Etihad and oneworld partners continue to grow

Airberlin’s codeshare with its strategic partner (and 29% shareholder) Etihad Airways has continued to build. In the first nine months of 2013, common bookings with Etihad more than doubled to reach 422,199. By Oct-2013, the year to date figure had reached 537,00, already two thirds more than in the whole of 2012.

Airberlin expects common codeshare bookings with Etihad to double in 2013 versus 2012 on a full year basis. In 3Q2013, airberlin implemented codeshares with two other members of the Etihad equity alliance, Virgin Australia and Air Serbia. It is now also talking to India’s Jet Airways about possible cooperation. 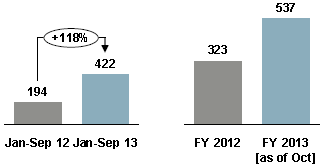 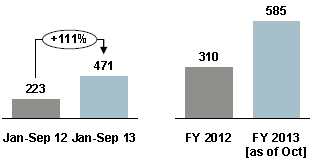 Airberlin now says that the group’s Turbine 2013 profit restructuring programme has already secured 100% of its planned EUR200 million of earnings benefits for 2013. Moreover, the absence of turnaround charges meant that it made a net contribution to earnings for the first time in 3Q2013. In terms of human resources, headcount has been cut by 562 full time equivalents as of end Sep-2013 compared with a year earlier.

Nevertheless, in spite of Turbine performing according to plan, the earnings outlook is clouded by a number of factors offsetting the progress of the restructuring programme. These include tariff increases at Spanish airports (Spain is airberlin’s largest international destination, accounting for 28% of its international seat capacity in the week of 11-Nov-2013 according to Innovata) and the German aviation tax.

The programme aims to achieve a cumulative EUR 400 million of savings by the end of 2014. The next initiatives under Turbine include the spin-off of the service centre into a JV with Competence Call Centre GmbH in Berlin, which is already under way. This will see the transfer of around 250 employees to the new company.

Further productivity gains are expected from a ‘lean aircraft stationing’ concept, under which specific medium-haul aircraft types will be allocated to five of airberlin's stations. The carrier also plans to introduce a new boarding procedure and the improved control of hand baggage regulations, leading to reduced turnaround times and lower costs.

Airberlin's 2013 guidance has been lowered

Whereas airberlin’s 2Q results retained its FY2013 target of a breakeven EBIT result, albeit conceding that this had become more challenging, the carrier has now abandoned this target.

According to airberlin, “the general market situation will not recover in the year-end quarter, due to the current price weakness in particular…”.

It expects that “the Company should now only be able to come close to achieving market consensus in 2013 with positive one-off effects and a higher other operating income”. It adds: “This is currently being pursued”. 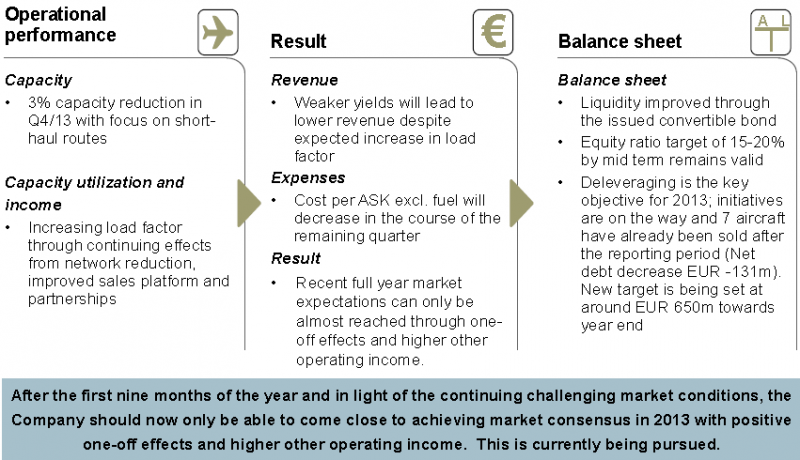 Immediately before the 3Q results announcement, the market consensus forecast for 2013 EBIT was for a loss of approximately EUR40 million, already below the company’s previous target. To achieve even this, the company’s new guidance suggests that it will need to realise planned one-off disposal gains and so the underlying operational loss will be worse.

Network rationalising and capacity cuts have led to strong load factors and the Turbine programme has delivered planned cost savings, with 3Q seeing CASK fall for the first time this year.

What airberlin management was not counting on was a weakening trend of unit revenues.

Targets for airberlin’s balance sheet and profits are sliding downwards, even though its Turbine is delivering maximum thrust. It will need to find more power either from its cost savings programme or from shareholder Etihad if it is to regain a financially secure flight path.

See related report: Airberlin: a game of two halves. Can Turbine power it to breakeven in 2013 after 1H losses?