Airberlin was the only listed European airline to record an operating loss in 2015. Moreover, both its operating loss and its net loss were wider than in 2014. Its 1Q2016 losses show little sign of progress, although they represent the seasonally weakest quarter and airberlin expects an improvement for FY2016.

Airberlin's restructuring programme led to network adjustments and capacity reduction in 2015. Helped also by new fare classes and other commercial developments, this drove an increase in load factor and unit revenue. However, its unit cost rose more rapidly than its unit revenue in 2015. After seeing both measures fall in 2014 (with CASK falling more quickly), this marked a return to the trend of several years - one that has left it mired in eight straight years of operating losses.

Since the end of 2015 when airberlin's cash balance was at a new low it has secured fresh debt funding, thanks in no small measure to its largest shareholder, Etihad. In 2016 further fuel cost benefits and expected yield growth may just provide the conditions for airberlin to return to profit. Although airberlin has not yet given a target for the year, achieving this should be a minimum goal.

In 2015 airberlin's net loss widened by 18.3% to EUR447 million, compared with a loss of EUR377 million in 2014. This result was affected by one-off items in both years and higher financing costs (mainly foreign exchange-related), as well as higher tax charges in 2015 compared with 2014.

Its reported EBIT figure was a loss of EUR307 million, only 4.5% greater than the loss in 2014. However, this EBIT result includes other operating income, which includes gains on asset disposals and other non-operating items, and is stated before taking out various one-off costs.

In 1Q2016, airberlin's net loss narrowed by 13.2%, to EUR182 million from EUR210 million a year earlier. This result was boosted by favourable changes in finance costs related to changes in the value of currency and derivative instruments. The EBIT loss widened from EUR160 million to EUR172 million, while the operating loss (which excludes other operating income) was flat at EUR176 million (down by 0.3%).

For airberlin 2015 was its eighth successive year of operating losses and its seventh net loss in the past eight years. The only net profit reported in that period, in 2012, was achieved only thanks to the sale of its topbonus loyalty programme to Etihad, shortly after Etihad became airberlin's biggest shareholder in late 2011. 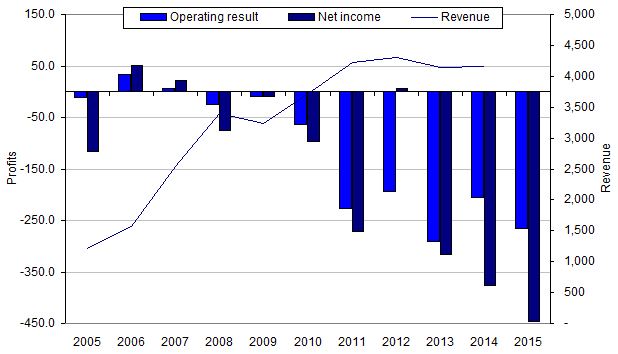 Among the 22 major stock exchange-listed European airline companies and their principal subsidiaries, airberlin's operating margin was again the lowest in 2015.

Of these companies, airberlin was one of only two to report an operating loss in 2015, and was also one of only four to suffer a fall in operating margin in 2015 relative to 2014. Its 1Q2016 operating margin of -23.9% was also the second lowest among European airlines that had reported results by the time of airberlin's 1Q report on 12-May-2016. Only Pegasus Airlines had a (slightly) lower 1Q2016 margin, at -24.1%. However, Pegasus has historically posted heavy 1Q losses before consistently going on to record positive FY margins . 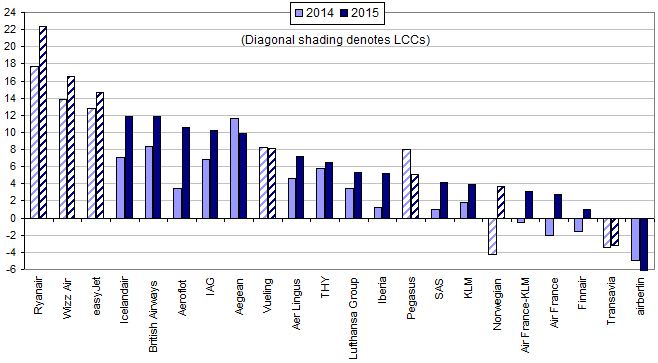 Note: calendar years except Wizz Air (2014 is year to Mar-15, but 2015 is 12M to Dec-15); easyJet (years to Sep-14 and Sep-15); SAS (years to Oct-14 and Oct-15)
Operating margin based on operating profit before exceptional items and before equity investments
Source: CAPA - Centre for Aviation, airline company reports

Year-end cash falls to 15 days of revenue, but new debt secured since the end of 2015

When it comes to its balance sheet airberlin continues to live a somewhat hand-to-mouth existence. Accumulated losses have helped to push the book value of shareholders' equity further into negative territory, closing 2015 at minus EUR1,125 million. Even after taking account of the hybrid capital held by Etihad (in addition to its 30% stake of the ordinary shares), the total equity value is still negative, at minus EUR799 million.

However, primarily book equity is only of interest to accountants: of more importance in the real world is cash flow. Airberlin generated negative operating cash flow of EUR237 million in 2015, after interest and tax, and did not manage to cover this shortfall with asset disposals (which raised EUR198 million net of investment in assets). Moreover, although it raised funds from new debt, this did not cover debt repayments that fell due in the year.

Although this equivalent revenue days figure has oscillated from year to year, it has been on a broadly downward trend for several years, highlighting airberlin's propensity to burn cash.

Again, its 30% shareholder Etihad has come to airberlin's rescue. In Jan-2016, when there was still USD30 million undrawn from its existing shareholder loan, Etihad provided a further EUR75 million loan to airberlin.

In addition, in Apr-2016, airberlin obtained two new loans from banks in Abu Dhabi, both guaranteed by Etihad. These were a two year bank loan of AED726 million (EUR125 million) and a revolving loan with a one year maturity of EUR75 million.

Thus, airberlin has raised EUR325 million in new debt funding since the end of 2015. This buys more time for it to continue with its restructuring programme in pursuit of a return to profit. 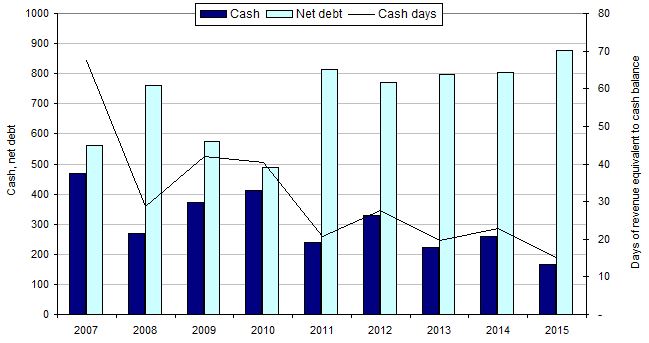 Load factor also compares well with the levels reported by Europe's major legacy groups in 2015 (Air France-KLM at 85.1% IAG 81.4% and the Lufthansa Group 80.4%), although it is short of the 90%+ load factors achieved by leading European LCCs such as Ryanair and easyJet.

The number of flights fell by 5.6% in 2015 and the number of destinations fell by 6.1% (to 138), from which it can be deduced that average frequencies were just above stable year-on-year.

Network optimisation remains a feature this year. In the first four months of 2016, ASKs fell by 7.8% and load factor increased by 0.3ppts to 82.9%. 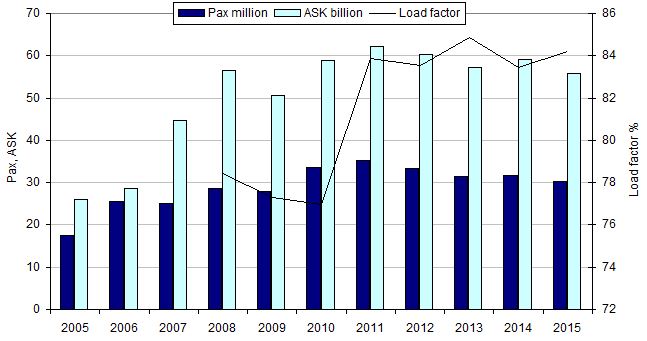 Traffic volumes benefited from another increase in codeshare traffic with all partner airlines, which rose from 1.46 million in 2014 to 2.13 million in 2015.

The number of passengers under airberlin's codeshare with Etihad increased from 562k in 2014 to 667k in 2015. A regulatory dispute between Germany and the UAE over many of airberlin's codeshare flights with Etihad was resolved positively, but not before it had depressed booking levels in 4Q2015 and 1Q2016. According to airberlin, the uncertainty had a negative impact on its 2015 EBIT of EUR40 million.

Oneworld codeshare passengers grew in number from 659k in 2014 to 686k in 2015. The North Atlantic is a particular focus for commercial cooperation with oneworld partners.

The capacity reduction in 2015 was partly due to airberlin's shift towards an increased mix of Airbus aircraft, which have fewer seats than the Boeings that they replaced. Its Boeing fleet fell by 12 to 31 aircraft during the year, while its Airbus fleet increased by 19 to 103. The total group fleet went up by four to 153, as a result of timing differences between Boeing retirements and Airbus additions.

Revenue fell by 1.9% in 2015, less than the fall in ASKs. Flight revenue declined a little faster, by 2.6%, but this was partially offset by a 6.3% increase in revenue from ground and other services.

The total revenue per ASK (RASK) increased by 3.7% in 2015, and in an industry experiencing downward price pressure this was an encouraging result.

RASK was boosted by airberlin's capacity reduction, but also benefited from a new fare structure and new revenue management system. In addition, ancillary revenue per passenger increased by 9.2% to EUR6.31.

Total operating costs, before restructuring and non-recurring items, fell by 0.4% year-on-year, slower than the fall in revenue and in spite of the capacity cut in 2015.

Fuel costs decreased by 9.6% as a result of lower prices and were partly offset by airberlin's fuel hedging programme, which delays the full impact. It expects a further EUR250 million in fuel benefit in 2016.

Ex fuel costs increased by 2.4%, boosted by the stronger USD with regard to items such as operating leases (up 13.1%). The airline expects its restructuring programme to have a positive impact on costs in 2H2016.

Labour costs increased by 10.0% (excluding restructuring provisions), reflecting wage increases and also the reclassification of employees from the NIKI labour pool: from materials and services costs to employee costs. This latter point led to a 5.3% increase in average headcount, but otherwise staff numbers were slightly reduced versus 2014.

Adjusted for the integration of the NIKI labour pool employees, labour cost per ASK increased by 5%, focusing on the need for further efforts to improve labour productivity.

CASK has risen faster than RASK over multi-year period

As noted above, airberlin's total RASK grew by 3.7% in 2015. However, this was more than offset by a 5.3% increase in CASK, according to CAPA calculations. Moreover, its ex fuel CASK grew by 8.3%. (Note that this CASK calculation does not offset costs with other operating income, but does deduct one-off costs and differs from that published by airberlin).

Although airberlin's RASK and CASK both fell in 2014, the trend for a number of years has been for both measures to increase. The problem for airberlin is that RASK growth has outpaced CASK growth. Since its last positive operating result in 2007, RASK has grown by 29%, while CASK has grown by 37% (and ex fuel CASK is up 39%). 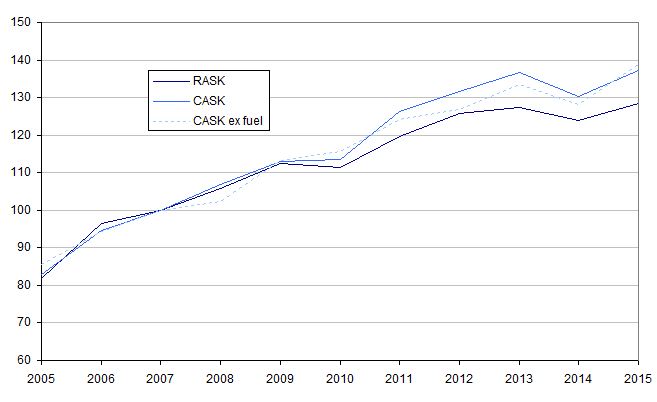 Just over a year ago, when reporting its 2014 results, airberlin said that it expected significantly improved results in 2015. It was unable to fulfil this expectation. At that time, it also targeted a return to profitability in 2016.

Now, its latest annual report refrains from giving a profit target for this year. Instead, it draws attention to the global economic outlook, which it points out has "deteriorated significantly", although it also notes that IATA forecasts improved earnings for airlines in 2016.

The continuation of the restructuring programme introduced in 2014 will be airberlin's own focus in 2016,  as well as its cooperation with Etihad and the expansion of its long haul network from Berlin and Duesseldorf, including on the North Atlantic. It will also develop its medium haul network in Italy, in partnership with Alitalia (another Etihad investment).

Without giving a profit target, the airberlin CEO, Stefan Pichler, told analysts on a conference call on 28-Apr-2016 to discuss the 2015 results that he expects "a considerably better operating result in 2016". The airline expects to benefit from lower fuel prices and further increases in yields in 2016, although yield was under pressure in 1Q2016. It also expects costs to benefit from its restructuring initiatives in the second half. Costs will be the primary focus, said Mr Pichler.

The airline's 1Q2016 presentation, published on 12-May-2016, still gave no profit target for 2016, but reiterated that it expects an improved operating performance as the restructuring plan begins to achieve benefits. Airberlin cautioned that 2Q demand was being affected by the aftermath of geopolitical events, the airline noting softness in the premium market and overcapacity. It also said that network changes, partnerships and ancillary revenues were performing well.

It is unlikely that airberlin will have a better chance to achieve a positive result than it will have this year when the global industry is making new high margins, and before growing geopolitical and macroeconomic uncertainties possibly start to spoil the party.