Lufthansa operates three hubs in the country and it concentrates the majority of its long-haul flying in Frankfurt and in Munich. It operates to 70 non-stop passenger destinations from Düsseldorf, of which only four are long-haul: Chicago O’Hare, Newark, Toronto Pearson and Miami International. The latter service is suspended in summer 2012, leaving it with just three intercontinental routes from the airport in summer 2012.

Conversely, airberlin presently operates to 15 intercontinental gateways from Düsseldorf Airport, which has a large and rich catchment area (comparable to Paris and a lot larger than the natural catchment area of Frankfurt or Berlin) that extends into the Netherlands. The airline has steadily grown its North American offering from Düsseldorf over the past years and this focus has been reinforced recently by its membership in the oneworld alliance and a network realignment with new shareholder Etihad Airways. airberlin became a full member of oneworld on 20-Mar-2012.

As part of its strategic partnership with Etihad, airberlin terminated service to Bangkok and Phuket, and flights to Thailand are now offered over Etihad’s hub in Abu Dhabi. Several destinations in the Asia Pacific are now offered through codeshare flights operated by Etihad, including Brisbane, Melbourne and Sydney in Australia, Colombo, Islamabad, Jakarta, Karachi, Kuwait, Lahore and Muscat. The network changes also allowed airberlin to deploy the freed up capacity for its US expansion.

airberlin is moving away from its past positioning as a leisure/low-cost carrier towards a full-fledged network carrier, and accordingly the airline is developing hub operations in Germany with long-haul service connecting to short/medium-haul flights at Berlin and Düsseldorf. Düsseldorf has been earmarked as its hub of preference for airberlin's flights to North America.

“airberlin continues its growth at Dusseldorf International Airport with particular emphasis on expanding flights to North America. This also benefits passengers from the neighbouring Netherlands, who increasingly use airberlin’s services at Dusseldorf airport,” CCO Paul Gregorowitsch confirmed during the recent launch of airline’s Düsseldorf-Las Vegas service.

The Las Vegas service is seasonal and will run until 21-Oct-2012 but the carrier will continue operating to Los Angeles in winter 2012-13 on a twice weekly basis and up the frequencies of its service to Miami to six a week. In winter 2011/12 the carrier operated three weekly flights to Miami.

In summer 2012 the airline is operating to just three North American gateways from Berlin with 13 weekly frequencies.

Berlin Tegel is the carrier’s largest hub in terms of weekly seat capacity, but Düsseldorf is airberlin's largest hub in terms of ASKs. Four of its 10 largest international routes in terms of ASKs are from Dusseldorf: Palma de Mallorca, JFK, Miami and Abu Dhabi. The latter is a direct result of the strategic alliance with its part-owner Etihad, and the aim is to channel long-haul East-bound traffic over Etihad’s hub in Abu Dhabi.

airberlin had scheduled large network and capacity expansion in Berlin to coincide with the opening of the German capital’s new stupendous airport Berlin Brandenburg on 03-Jun-2012, but the opening was cancelled and has been pushed to Mar-2013. 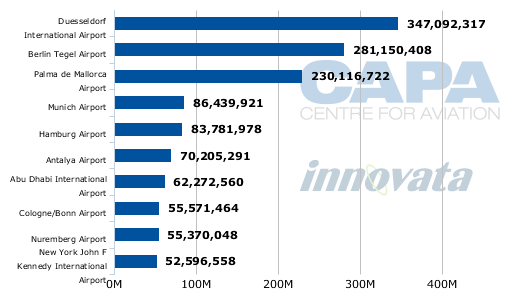 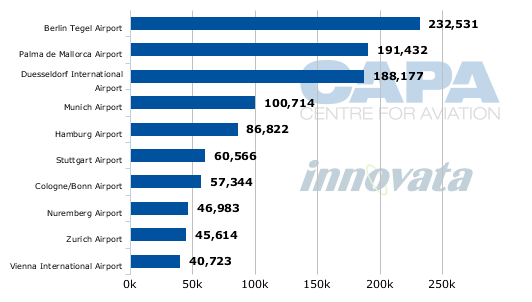 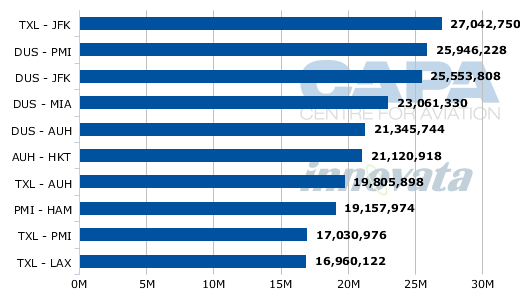 airberlin is Düsseldorf Airport’s largest operator in weekly seats and in ASKs, but Lufthansa is the main operator in terms of frequencies reflecting the carrier’s strategy not to develop long-haul at the airport. Geographically, Düsseldorf is located between Lufthansa’s Frankfurt hub and Star Alliance partner Brussels Airlines’ hub in Brussels. Expanding long haul at Düsseldorf would cannibalise these carriers’ intercontinental traffic at their respective hubs. 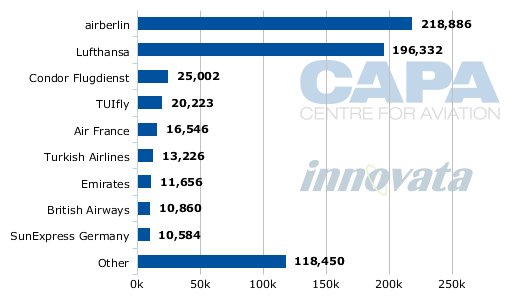 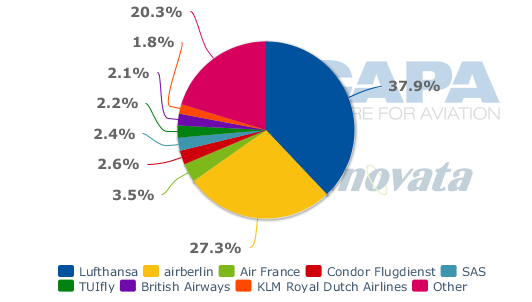 Düsseldorf Airport’s network spans 164 destinations of which 11 to North America. Seven of these are operated by airberlin. All North American routes from Düsseldorf are monopoly routes with the exception of Miami which is served by airberlin and Lufthansa, but Lufthansa vacates this route in the summer.

oneworld is growing at Düsseldorf but not yet dominant.

oneworld should embrace the opportunity at Düsseldorf

airberlin likes to position Düsseldorf Airport as a oneworld hub, and while oneworld has the largest share of the weekly seat capacity at the airport its lead over Star Alliance is minimal. In terms of ASKs, oneworld is the leading alliance but in flight frequencies it is Star with a 44.5% share. 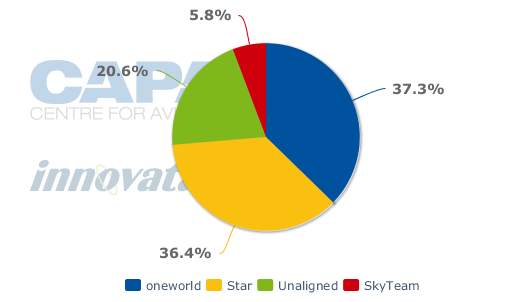 airberlin is the only oneworld carrier at Düsseldorf Airport providing intercontinental flights and connectivity largely with its own vast network. airberlin operates to 81 non-stop passenger destinations from the airport, complemented by a route to Helsinki by Finnair, Madrid by Iberia, Moscow Domododevo by S7 and two routes by British Airways to London Heathrow and to Billund (operated by its franchise partner SUN-AIR of Scandinavia). Other members such as American Airlines, Royal Jordanian and Japan Airlines are absent while airberlin has no network to the Far East. The only service to the Far East from Düsseldorf is by Star member Air China to Beijing.

The oneworld membership of airberlin is still in its early stages but the opportunity to build a thriving hub at Düsseldorf should be embraced.