Airberlin: another restructuring from another CEO after another loss in 2014

With only one year of (very small) net profit since 2007, it seems that loss-making can be a hard habit to break. More recent data show an improving unit revenue trend and airberlin expects 2015 to be much better than last year.

Nevertheless, this cannot hide the enormity of the challenge facing new CEO Stefan Pichler (appointed 2-Feb-2015) in restoring airberlin to profit. The fourth CEO in as many years has launched another redesign of the company's business model, aiming for a positive result in 2016.

Mr Pichler will likely have to achieve this without further investment by 30% shareholder Etihad. Moreover, while there remains potential for both revenue and cost synergies from the relationship with Etihad, the latest restructuring will need airberlin to focus on putting its own house in order.

airberlin's preliminary results for 2014 show that revenue of EUR4,160 million was just above its 2013 level (+0.3%) and that its net loss widened by between 15% and 23% to a figure in the range of EUR362 million to EUR387 million. Costs associated with restructuring and other one-off charges were the main reason why the net result was worse than 2013.

However, the final result has not yet been pinned down, because the precise amount of restructuring and one-off costs to be charged in 2014, in the range EUR85 million to EUR110 million, has not yet been finalised. Final results are expected in late Apr-2014.

The group has released a preliminary adjusted EBIT figure, which excludes restructuring and one-off costs and so gives a fair view of the underlying operating performance of the business in 2014. This result was also a loss, albeit one that narrowed from a loss of EUR232 million in 2013 to a loss of EUR193 million in 2014.

Given that it had raised net proceeds of EUR663 million in new debt and share capital in the first nine months, when it also had cash inflows of EUR90 million from asset sales and the return of advance payments on cancelled aircraft orders, this underlines the considerable rate at which airberlin burnt through cash during the year.

airberlin has now had five successive years of operating losses and has had a net loss in six out of the past seven years. (And it only made a net profit in 2012 thanks to the sale of its topbonus FFP to Etihad.) 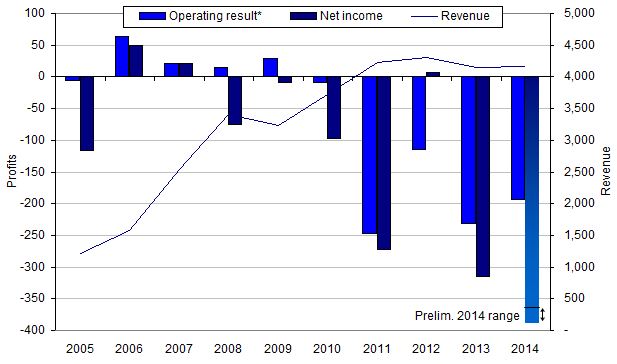 Passenger numbers grew by 0.6% to 31.7 million. The number of flights increased by 2.1%, slower than the ASK growth, but roughly in line with seat growth of 2.3% and implying a modest increase in average sector length.

airberlin's codeshares with oneworld partner airlines and with its shareholder Etihad contributed to its traffic growth in 2014. Passenger numbers on oneworld codeshare routes increased by 9% to 1.1 million.

Passenger numbers on Etihad shared routes increased by 7% to more than 600,000, helped by additional codeshare routes from Berlin, Stuttgart and Vienna to Abu Dhabi. Etihad also has begun codesharing with the latest airline to attract investment from Etihad, Alitalia.

Unit revenue, measured by RASK and RRPK, typically falls as sector length increases, but airberlin's unit revenue decline in 2014 also reflects underlying price weakness. Flight revenue per passenger, which might otherwise be expected to increase with longer sectors, dropped to EUR120.1 in 2014, down 0.8% from 2013. 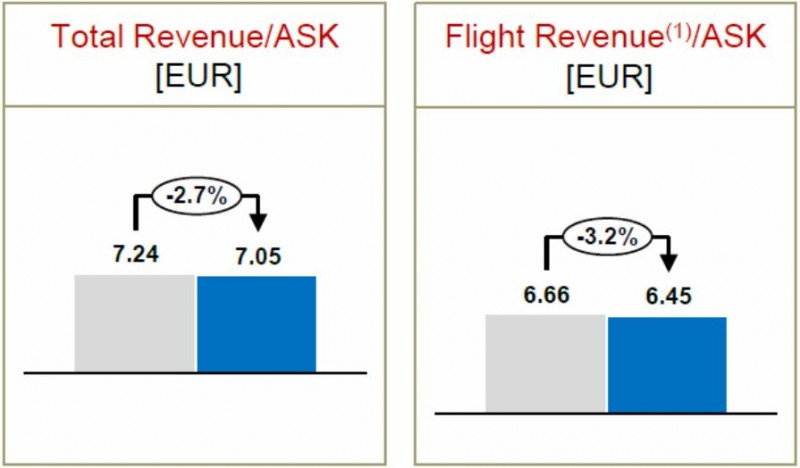 airberlin attributes this 4Q2014 yield improvement to the successful restructuring of the network in the quarter. However, this yield growth also coincided with a strengthening of USD versus EUR, a factor which was also positive for yield since international fares priced in (or linked to) USD translated into a higher number in EUR.

Although airberlin has not yet published details of its costs for 2014, we can calculate from the available data that operating costs before restructuring and one-offs fell by 1.6%, in spite of the capacity increase and the modest rise in revenue.

airberlin failed to deliver its expected increase in RASK, but it did manage a fall in cost per ASK (CASK), which was down by 4.6%, with ex fuel cost down 4.1%. The company's restructuring programme (and lower fuel prices) helped it to achieve cost per ASK reduction in all major cost areas, with the exception of labour. Labour cost per ASK increased by just under 2% as a result of wage increases and in spite of lower headcount. 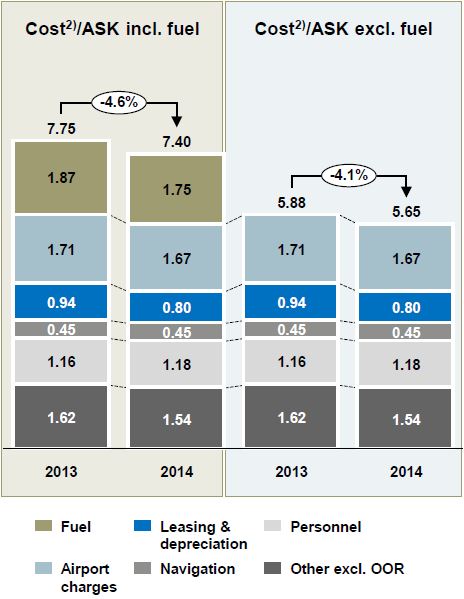 2014's CASK fall reverses longer trend, but the same is true of RASK

The chart below shows the development of airberlin's RASK and CASK since 2005, indexed to 100 in 2006, which was its peak year of operating profit. Since 2006, both RASK and CASK have followed a broadly rising trend, but CASK has risen more rapidly. The period 2010 to 2013 in particular saw CASK growth outpace RASK growth (in spite of increasing average trip length, which should lead to falling CASK).

In 2014, at last, the trend of rising CASK was reversed, but RASK also fell. If airberlin is to return to operating profit, it needs a sustained period of RASK outperforming CASK. It achieved this in 2014 (RASK -2.7%; CASK -4.6%), leading to a narrower underlying operating loss, but must continue to cut CASK while trying to limit the fall in RASK. 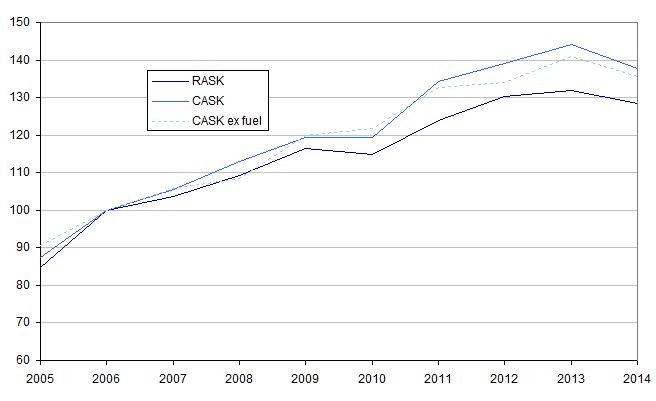 At this point, airberlin has not provided specific guidance on the outlook for 2015 profit, but said in a statement that it expected 1Q2015 operating loss before restructuring charges to be EUR25 million better than the same period a year earlier. This would continue the improving year on year trend: it achieved an improvement in this result in every quarter of 2014, with the exception of 3Q2014.

It also said that it expects significantly improved results this year, that will lay the groundwork for a targeted return to profitability in 2016. Its new CEO Stefan Pichler added: "In 2015, we will break the negative performance spiral of the past years by a significant redesign of our business model."

Another redesign of the business model by another new CEO

This signals the start of a "redesign" of airberlin's business model by Mr Pichler, in a three phase process. Phase 1 will focus on management and leadership structures and will continue to Sep-2015; phase 2, lasting until Mar-2016, will look at market segmentation and capacity adjustments; and phase 3, which will start in Apr-2016, aims for profitability and growth.

This latest business model re-think comes less than a year after the previous CEO Wolfgang Prock-Schauer stressed the need for the company to "evaluate our possible courses of action including airberlin's long-term business model". Before Mr Prock-Schauer, who held the job for two years, Hartmut Mehdorn occupied the position for less than 18 months. Mr Mehdorn, who replaced long-serving CEO Joachim Hunold in Sep-2011, introduced two cost restructuring programmes, 'Shape and Size' covering 2011-2012 and 'Turbine' covering 2012-2013.

It is tempting to be cynical about yet another restructuring programme from yet another new CEO at airberlin, but some recent traffic data give some cause for optimism. Although Jan-2015 ASKs increased by 5.7% and load factor fell by 0.9ppts to 78.3%, Feb-2015 saw a much needed load factor gain of 2.9ppts to 84.6%, based on an ASK cut of 0.6%. airberlin will lower capacity by 4.5% for the period Mar-2015 to Jun-2015. This capacity reduction, coupled with a new revenue management strategy, is aimed at driving yield improvements.

As noted earlier, currency movements have undoubtedly contributed to this improving trend in revenue per passenger and unit revenue improvements can be notoriously hard to maintain. The many waves of restructuring appear to be having a positive impact on cost reduction, but this must continue to be the prime focus.

airberlin should consider more aggressive use of NIKI

If airberlin's new CEO really means to redesign its business model, while continuing to focus on unit cost as the more controllable lever to engineer a return to profit, he could do worse than to look at changes being implemented by Europe's Big Three legacy groups. Although they have had mixed results so far, they have all embarked to a greater or lesser extent on a strategy of focusing their growth on low-cost subsidiaries.

airberlin does not give separate data on its low-cost subsidiary NIKI, but its preliminary 2014 results statement said that the LCC's cost structure "allowed it again to be very profitable in 2014, thereby setting a clear course with good growth perspectives thanks to an excellent unit cost position".

airberlin has identified NIKI to be its growth carrier within the D-A-CH region (Germany, Austria, Switzerland) with a clear focus on tourism. Perhaps it should consider using it more aggressively.