AirAsia X is preparing to take major steps in its network recovery, as it boosts its route total to seven and signals its intention to add more destinations – including London – later this year.

The latest announcements give the clearest indication yet of what the new iteration of AirAsia X will look like.

The Malaysian medium and long haul LCC grounded all its operations early in the COVID-19 pandemic and underwent a significant restructuring to survive. The airline’s strategy shows that it still has ambitious network plans following its revival.

It has returned with a pared-down fleet and order book. The airline has been back and forth on whether it would follow through on its initial goal to fly true long haul routes outside Asia-Pacific, but has now confirmed that it will pursue such services – in addition to key routes within the region.

AirAsia X is gradually adding back routes after two-year hiatus

The graph below shows how long AirAsia X (AAX) survived with essentially no capacity.

There have been a few passenger flights added back this year, but as of the week of 27-Jun-2022 seat capacity was at just 2% of the same point in 2019.

The data in this analysis includes just the core Malaysia-based operation – the airline's sister airline Thai AirAsia X is a separate company.

AAX relaunched international flights in Feb-2022 with service from its Kuala Lumpur base to Sydney, but it shelved this route again in Apr-2022. It is currently only operating routes to Seoul and New Delhi.

The airline has now scheduled flights to resume to Tokyo Haneda on 14-Jul-2022, and Sydney from 2-Sep-2022. In Oct-2022 it will restart flights to Osaka, which will continue to Honolulu. Flights to Sapporo will resume in Dec-2022.

AAX’s seven routes (with Osaka and Honolulu counted separately) are scheduled with frequencies of 2-4 times per week. However, the airline hopes to “return to pre-COVID capacity on some of our core routes within the next 12 months”, said AAX CEO Benyamin Ismail.

AirAsia X: proposed schedule, including existing and planned routes, 2022 and 2023 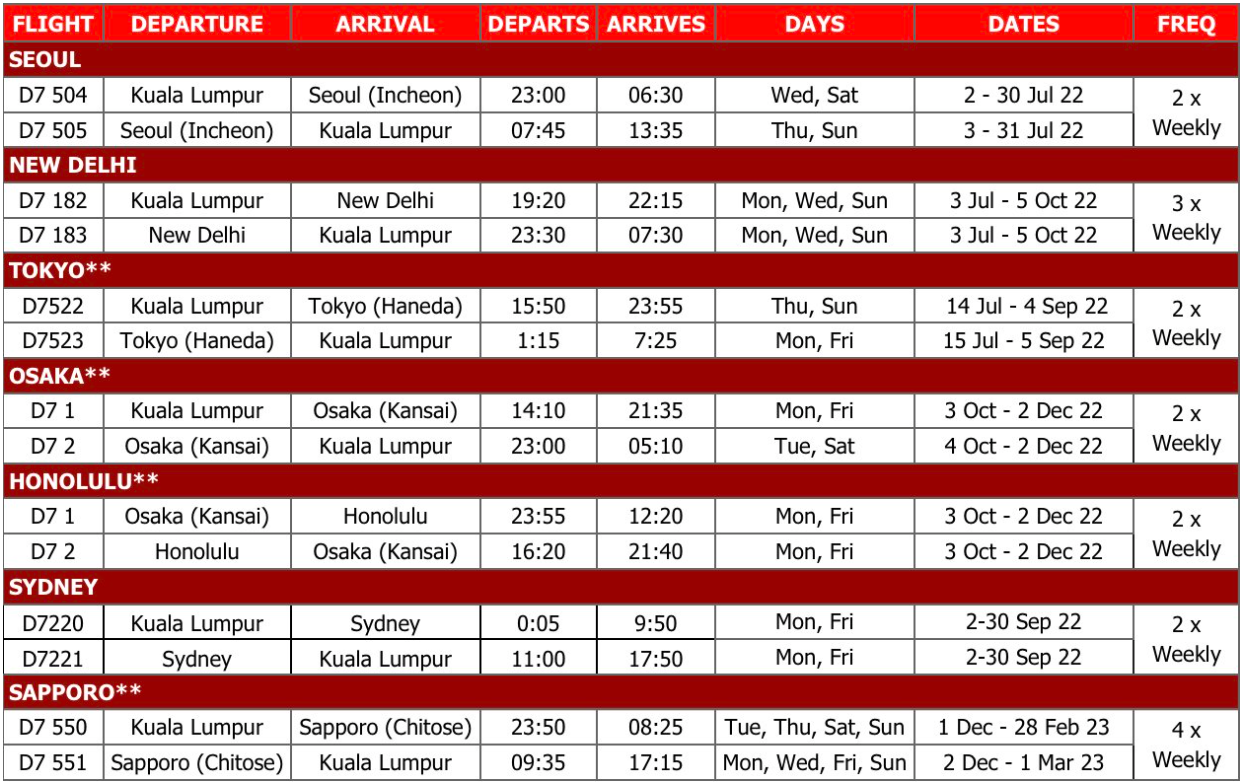 As well as these scheduled restarts, AAX revealed its intention to launch additional long haul services at some point later this year. These will include flights to Istanbul and Dubai, and London via Dubai. As yet, the airline has not disclosed launch dates for these routes.

While Dubai and Istanbul will be new destinations for AAX, the airline served London several years ago. It used Airbus A340s at that time, but cancelled the route in 2012 along with its Paris service. AirAsia X co-founder Tony Fernandes signalled many times in subsequent years that a return to London was a long term goal.

The London-Kuala Lumpur route is currently served nonstop by Malaysia Airlines, which uses Airbus A350s. It was also served by British Airways before the COVID-19 pandemic, and for brief periods since then.

There are one-stop options on other airlines – including on Emirates, which would, of course, have the same Dubai stopover point that AirAsia X plans to use.

The route between Kuala Lumpur and Istanbul is currently only served by Turkish Airlines.

Australasia is another market where AAX is looking to expand

AAX has also confirmed that the airline aims to restart flights to the Australian destinations of Melbourne and Perth soon, as well as a route to Auckland via Australia. Again, it has not set dates for these yet.

The airline has previously operated flights to Auckland via Gold Coast in Australia, but cut the Auckland leg of this service in Feb-2019.

AAX will boost its fleet of A330s in service, although it will still be smaller than before restructuring

To accommodate its growth plans, AAX is increasing its operational fleet by activating more aircraft, and through some additional leases.

AAX is currently operating six Airbus A330s and it intends to boost this fleet to 15 aircraft by the end of 2022.

The airline operated a fleet of 25 A330s before the pandemic. It cut this down to 11 aircraft during its restructuring – although many of these remain parked.

The airline has since announced plans to lease another four A330s to add to the 11.

AAX pared back its aircraft orders during its restructuring, although it still has a relatively healthy order book.

When AAX puts its scheduled network in place, it will mark an impressive return from a point where its survival appeared questionable.

The fact that it is already announcing its intention to add more international routes this year – including some ambitious long haul services – indicates the level of confidence it has in its retooled business model.

The pandemic recovery phase appears to have increased the appetite of some airlines for long haul LCC flights.

Singapore Airlines’ LCC subsidiary Scoot has resumed its pre-pandemic flights to Athens and Berlin, and it has also launched its own London service via Bangkok (briefly in Dec-2021 and then on a regular basis from Mar-2022).

Meanwhile, Japan Airlines' subsidiary Zipair began long haul trans Pacific flights from Tokyo to Los Angeles in Dec-2021, and it intends to add a route to San Jose in Dec-2022.

AAX has been eyeing a return to Europe – London in particular – for many years. Like the other LCCs, it obviously sees enough in the post-pandemic environment to suggest that these long haul routes will be more viable than in previous attempts.