The small airport, which currently only handles domestic flights and international charters, has been operating well above capacity. But a major expansion project is expected to be completed by early 2017, providing a new terminal and international facilities.

This is Part 2 in a series of reports on Philippine airports. Part 1 analysed the outlook for Caticlan Airport, where an extended runway and new terminal is expected to open in 2016.

Caticlan, which is a 10min ferry from the popular tourist island of Boracay, is currently the 14th largest airport in the Philippines based on current seat capacity. The rapid growth over the last several years in visitor numbers to Boracay has mainly been accommodated by Kalibo Airport, which is about 70km from Boracay and Caticlan. As CAPA highlighted in the first report, Kalibo is now the fourth largest airport in the Philippines after Manila, Cebu and Davao.

Palawan is positioned for potentially faster growth than Boracay and could eventually overtake Aklan as the second largest tourist region in the Philippines after Central Visayas. Central Visays, which includes Cebu and nearby islands, has about 3 million annual visitors.

Boracay is already well developed and has become congested. Palawan is a much larger island is still largely undeveloped. The island is about 500km long (but very narrow) and has a population of less than 1 million.

Puerto Princesa Airport is the main gateway to Palawan

Purto Princesa is currently only served with scheduled flights from Manila, Cebu and Iloilo, a city in central Philippines which has the country’s fifth largest airport. Manila is currently by far the largest destination from Puerto Princesa, accounting for nearly 90% of the airport’s total seat capacity.

All three of the main airline groups serving the Philippines currently operate frequent flights between Manila and Puerto Princesa. Cebu Pacific/Cebgo is the market leader with 43 weekly flights on the route while AirAsia Zest/PAA has 28 weekly flights and Philippine Airlines/PAL Express operates 22 weekly flights, according to OAG data for the week commencing 6-Jul-2015. 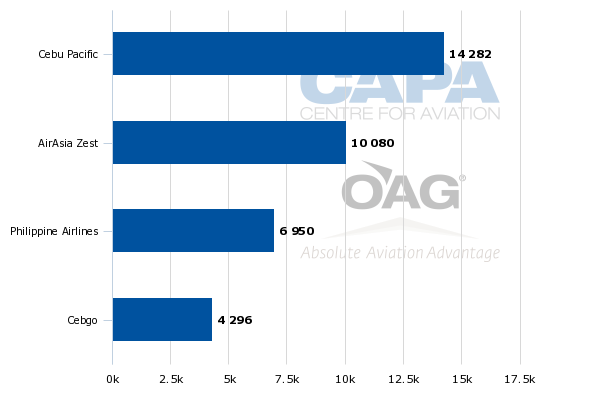 Puerto Princesa also handles international charter flights. There have been several charter programmes from mainland China in recent years and PAL launched in early 2015 a regular once weekly charter from Puerto Princesa to Taipei in Taiwan. PAL mainline operates this flight and one weekly Manila-Puerto Princesa flights (both operate on Fridays) while the other 21 PAL Group flights in the Puerto Princesa market are operated by regional full-service subsidiary PAL Express.

The Puerto Princesa Airport currently handles about 1.5 million annual passengers but was designed to accommodate only about 350,000 annual passengers. A major expansion project began in 2014 with the awarding of a USD83 million project to a Korean construction company.

Construction began in late 2014 and is expected to be completed by early 2017. The project includes a new passenger terminal with capacity to handle 2 million annual passengers, a cargo terminal, apron, taxiways and new navigation equipment.

The Philippine and Palawan governments expect the new airport to meet international standards and see the facility as a key component in a plan to attract more tourists to Palawan island. Philippines president Benigno Aquino III visited the airport and construction site on 29-Jun-2015, an indication of the importance the government has placed on developing an international airport to help support growth of Palawan’s promising tourism sector.

In Mar-2015 the Palawan government along with AirAsia and other partners launched a tourism campaign to promote the island, which was voted in 2014 as the “best island in the world” by Conde Nast Traveller readers. The “World’s Best Island” campaign is designed to increase awareness among both domestic and international travellers and make Palawan more affordable through more seats, cheaper fares and new hotel packages.

The campaign aims to double the number of visitors to Palawan in 2015 to 2 million. But such a goal seems unrealistic as seat capacity at Puerto Princesa has increased only slightly. AirAsia pledged as part of the campaign to add a fifth daily flight on the Manila-Puerto Princesa route but its schedule for Jul-2015 and the remainder of 2015 show it will maintain four daily frequencies.

AirAsia has identified Puerto Princesa as one of two or three new international hubs that the group plans to open in the Philippines as PAA/AirAsia Zest restructures its network. The new business plan for the two carriers, which are expected to eventually transition to a single air operators’ certificate, focuses on developing under-served leisure destinations.

As CAPA has previously highlighted, AirAsia’s Philippine operation has struggled financially since it was launched in 2012. But the group sees emerging leisure destinations in the Philippines such as Puerto Princesa as having huge opportunities for growth while staying under the radar screen of Cebu Pacific.

See related report: Philippines AirAsia/Zest AirAsia rallies as it prepares for an IPO, but challenges remain

Cebu Pacific for now is studying potential opportunities at Puerto Princesa but the typically conservative carrier is unlikely to make a move until the market becomes more mature. PAL is also unlikely to launch scheduled international flights at Puerto Princesa and instead stick to charters which have little or no risk as they are underwritten by agents in key source markets such as Taiwan.

The AirAsia strategy for Puerto Princesa envisions launching several scheduled routes to mainland China. AirAsia plans to wait for the new international terminal and customs facility, which could potentially be completed by the beginning of the 2016 northern winter season.

Shanghai would be a logical initial route for AirAsia’s new international hub at Puerto Princesa as PAA/AirAsia Zest already serve Shanghai from Kalibo and has been looking at resuming service to Shanghai from Manila. There are several other potential Chinese routes from Puerto Princesa as the AirAsia Group already serves 13 Chinese airports from its hubs in Thailand and/or Malaysia.

AirAsia is keen to leverage its strong presence in the Chinese international market, where it is the leading LCC, by opening new routes to popular leisure destinations throughout Southeast Asia. AirAsia is already serving China from several secondary airports, including Krabi in Thailand and Kalibo in the Philippines, and is expected to add several more including Puerto Princesa over the next few years.

The new AirAsia business plan for its Philippines operation also envisions the launch of flights to Japan, Singapore and Taiwan. But at least for now the focus is on launching flights to Taiwan from Manila and to Japan and Singapore from Cebu. 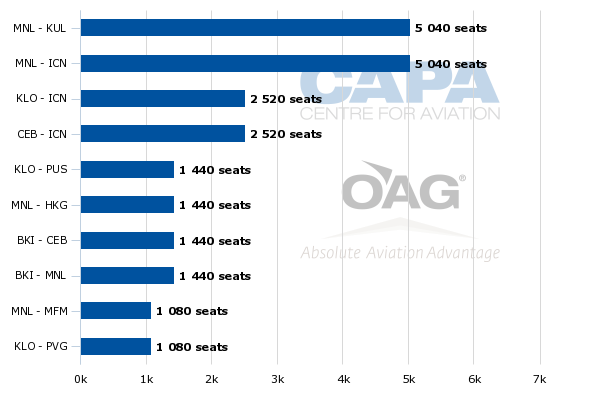 Seoul is served from all three bases while Busan and Shanghai are only currently served from Kalibo. Hong Kong, Kuala Lumpur and Macau are only served by PAA/Zest from Manila although sister carrier Malaysia AirAsia serves Cebu, Manila alternative airport Clark and Kalibo from Kuala Lumpur. PAA/Zest now serves Kota Kinabalu from both Cebu and Manila, having launched Cebu-Kota Kinabalu in late Mar-2015.

PAA has stated it is interested in also serving Kota Kinbalu from Puerto Princesa. The two airports are only about 500km apart as Palawan is in the westernmost portion of the Philippines while Kota Kinabalu is located on the island of Borneo in eastern Malaysia.

AirAsia has the advantage of leveraging strong sales channels in both Malaysia and the Philippines and marketing Kota Kinabalu-Puerto Princesa to foreign tourists that rely on AirAsia to hop around Asia. AirAsia also has a hub and transit product in Kota Kinabalu, which would provide passengers from several Southeast Asian cities (including Jakarta, Kuala Lumpur, Penang and Singapore) an opportunity to access Puerto Princesa without backtracking through congested Manila.

Political tensions between China and Philippines could be a spoiler

AirAsia’s aspirations for serving China from Puerto Princesa may also prove to be overly ambitious, particularly if tensions between China and the Philippines do not ease.

A territorial dispute over a remote archipelago in the South China Sea has impacted Chinese visitor numbers to the Philippines over the last three years. Seat capacity between China and Philippines is currently at about the same levels as early 2012.

Puerto Princesa is a particularly sensitive destination for China-Philippines relations as it is the closest part of the Philippines to the disputed Spratly archipelago. In Jun-2015 the Puerto Princesa Airport was used as the staging area for an unprecedented joint military exercise between the Philippines, Japan and the US which drew staunch criticism from China.

Shortly after the exercise the Philippines government decided to remove Puerto Princesa Airport from a group of airports that was being considered for public private partnership (PPP) programmes. The government sees a need to maintain ownership of Puerto Princesa Airport to give it the flexibility to convert the facility from civilian to military use if such a need arises in future.

The Puerto Princesa market clearly has huge long-term potential as tourists from within the Philippines and abroad are attracted to Palawan’s unspoiled beaches, particularly as other Philippine holiday destinations such as Boracay become increasingly crowded. But there could be challenges in developing international routes after the Puerto Princesa Airport is upgraded.

While AirAsia is extremely optimistic on the prospects for Palawan, other Philippine carriers are taking a more cautious wait and see type of approach. For example Cebu Pacific is now focusing on expanding international operations from other secondary airports in the Philippines although it will almost certainly make a move at Puerto Princesa in future if the market matures and it sees opportunities.

Therefore AirAsia will likely be the litmus test when the Puerto Princesa Airport starts to handle scheduled international flights.

A hub at Puerto Princesa could pay big dividends for AirAsia’s struggling Philippine joint venture and become a profitable niche. But it also represents a big gamble as AirAsia tries to turn around its Philippine operation.