Cebu Pacific, which has remained in the black in 1H2011 despite soaring fuel costs, does not expect the Oct-2011 launch of AirAsia Group’s new Philippine affiliate to curtail its growth or impact its profitability. Philippine Airlines (PAL), which was back in the red for the three months ending 30-Jun-2011, should also not be significantly impacted by AirAsia’s entry into the dynamic Philippine aviation market although the flag carrier continues to struggle against some of its existing low-cost competitors including Cebu Pacific.

AirAsia Philippines will become the country’s sixth low-cost carrier in Oct-2011, when it plans to commence operations from a base at Manila alternative airport Clark. The new carrier took delivery of its first A320 earlier this month and has begun the process of applying for a Philippine AOC.

Malaysia-based AirAsia, which owns 40% of AirAsia Philippines with the remaining 60% owned by Filipino entrepreneurs, has allocated the new affiliate two of its 2H2011 A320 deliveries and two of its 2012 A320 deliveries. AirAsia Philippines announced on 15-Aug-2011 that it will use the first aircraft from Clark to Hong Kong, Macau and Singapore while the second aircraft will be used for services from Clark to Bangkok and Seoul as well as the domestic destinations of Kalibo and Puerto Princesa.

Both Cebu Pacific and PAL currently serve all of AirAsia Philippines’ initial seven destinations but their hubs are at Manila International, just south of the city centre, rather than Clark, which is approximately 80 kilometres north from the Manila city centre but is able to pull on demand from the north vicinities. PAL does not have any services at Clark while Cebu Pacific has only 20 weekly flights from Clark, including 17 to Bangkok, Hong Kong, Macau and Singapore. But from Manila the carrier currently operates more than 70 weekly frequencies to the same four destinations, according to Innovata schedule data.

“Clark isn’t Manila,” Cebu Pacific chief executive advisor Gary Kingshott said during a conference call with media last week to discuss the carrier’s 2Q2011 results. “It appears there will be a substantial amount of capacity added to the market ex-Clark. I’m not sure that will be pretty picture but it won’t impact us.”

Mr Kingshott says Cebu Pacific’s experience is that yields are on average 20% lower from Clark than closer-in Manila. Clark is already the base for SEAir’s new Tiger-branded low-cost operation, which launched in Dec-2010 and now consists of two A319s deployed only on international routes: Hong Kong, Macau and Singapore. Clark is also the base for tiny low-cost carrier Spirit of Manila, which only operates international services and currently only has two destinations: Macau and Taipei. The Philippines’ other two low-cost carriers, AirPhil Express and Zest Air, are based at Manila International and predominately operate domestically.

Cebu Pacific, which according to Ascend data currently operates a fleet of 33 aircraft with another 59 on order, is confident it can capitalise on its status as the first and largest LCC in the Philippines. The carrier expects to continue growing at least as fast as the overall market. Mr Kingshott says the carrier’s “baseline assumption” is the domestic market will continue to grow at a clip of about 15% per annum.

Cebu Pacific CEO Lance Gokongwei is confident of retaining its current domestic and international market share, despite competition from five other LCCs and flag carrier PAL, as it is adding capacity at a faster rate than its competitors. Cebu Pacific will take delivery of seven additional A320s over the next seven months, including four aircraft in 4Q2011. AirAsia Philippines, AirPhil, SEAir and Zest are expected to grow their A320 fleets by only two aircraft in 4Q2011.

PAL, meanwhile, incurred a net loss for the same three months, its 1QFY2012, of PHP454 million (USD11 million), compared to a net profit of PHP1.603 billion (USD38 million) for 1QFY2011. PAL returned to the black in FY2011, posting last month its first annual profit since exiting receivership in 2007. But the carrier says it has been impacted in recent months by the increase in fuel prices, the political turmoil in the Middle East and the Mar-2011 earthquake in Japan.

PAL’s outlook for FY2012 seems rather bleak but this is not being driven by new competitors. Instead external factors and continued expansion by Cebu Pacific at the country’s three major airports – Manila, Cebu and Davao – are the primary drivers.

PAL was not able to fully recover the rise in fuel prices as its passenger yield improved by only 9% compared to 1QFY2011. PAL’s traffic was also down 7% in the quarter. 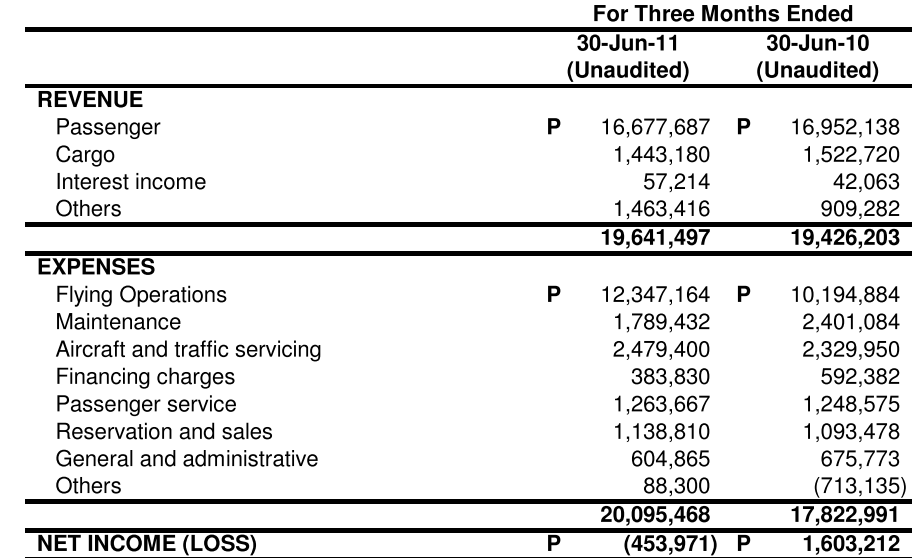 Cebu Pacific, however, saw its traffic grow 15% in 2Q2011. It was able to outpace this with a 16% increase in revenues to PHP9.21 billion (USD216 million). Passenger revenues were up only 10% to PHP7.564 billion (USD177 million) as the average fare dropped 7% despite the increase in fuel prices. This was partially offset by higher ancillary revenues, which more than doubled in 2Q2011 to PHP1.146 billion (USD27 million).

Total domestic traffic in the Philippines grew 14% in 2Q2011 to 5.15 million passengers, with AirPhil and Zest recording the biggest gains. Both carriers, which have transitioned from full-service to low-cost models in recent years, are coming from much smaller bases than Cebu Pacific.

PAL saw its domestic market share slip 9.2ppt to 23.7%, but this was primarily driven by its continued shift of domestic capacity to partner AirPhil Express. AirPhil, which is owned by PAL’s majority stakeholder and is leasing its A320s from PAL, saw its market share improve by 8.3ppt to 18.6%. Zest Air saw its market share grow 4ppt to 12.1%. 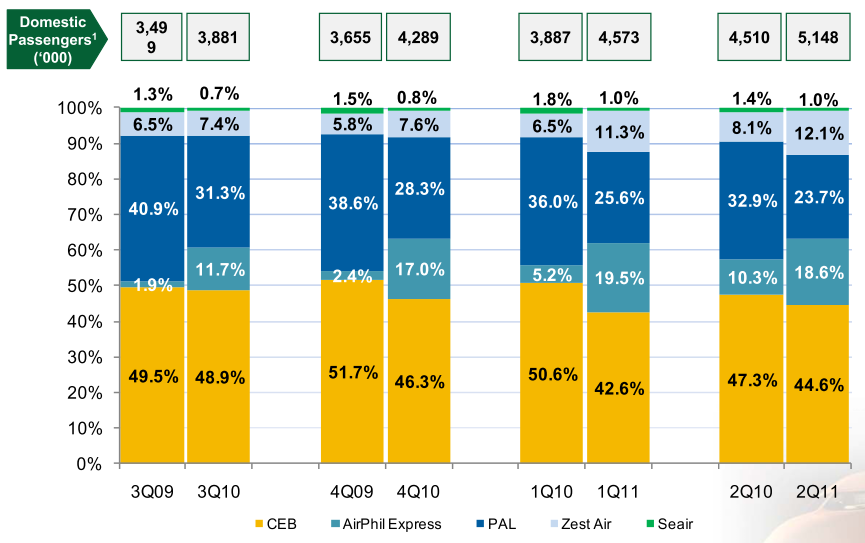 Source: Cebu Pacific, based on data from Philippine CAB

SEAir, which only operates turboprops on domestic routes, saw its domestic market share drop from 1.4% to 1%. The carrier has been trying to expand its A320 Tiger-branded low-cost operation into the domestic market but so far has not succeeded in its controversial attempt to secure domestic authorisation to use A320s leased from Tiger on domestic trunk routes from Manila International. PAL, Cebu Pacific, AirPhil and Zest have objected to the plan.

Tiger, which plans to acquire a stake in SEAir should the carrier succeed at entering domestic trunk routes, has said it remains confident it will receive the required authorisations. But Mr Kingshott says he is not aware of any changes in the status of the Tiger-SEAir application since the Philippine CAB issued a show cause order in May-2011 and forced SEAir to halt tickets sales on the planned Manila-Cebu and Manila-Davao routes.

Cebu Pacific, meanwhile, is planning to increase capacity in 4Q2011 on both Manila-Cebu and Manila-Davao, which are by far the biggest routes in the Philippines. Cebu is also adding a new domestic destination in Oct-2011, when it launches service to Tawi-Tawi, its 50th destination overall.

The additional domestic capacity in 2H2011 comes after Cebu Pacific has focused most of its expansion in recent months in the international markets. Mr Gokongwei acknowledges some of the carrier’s recent international expansion - which primarily includes additional capacity to Hong Kong, Singapore, South Korea and Thailand - did not perform well initially. Mr Gokongwei now expects improvement over the next few months, pointing out it takes longer for new international flights to mature compared to domestic routes. 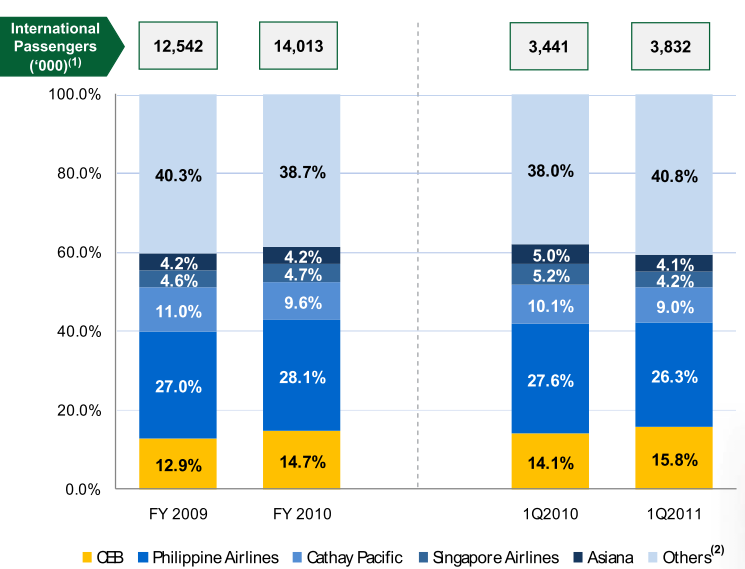 Source: Cebu Pacific, based on data from Philippine CAB

Showing further confidence of its position in the market, Cebu Pacific last month accelerated fleet expansion by committing to two additional leased A320s for delivery in Mar-2012. The new leases means Cebu Pacific is now slated to add a total of four A320s in 2012. Its four A320 deliveries now slated for 4Q2011 will result in a fleet of 29 A320 family aircraft along with eight ATR 72s at the end of 2011.

Another seven A320 deliveries are slated for 2013. The carrier in 2014 expects to take delivery of five A320 deliveries, but these will largely replace four aircraft being returned to their lessors.

In placing the order, Cebu Pacific citied the improved range of the A321neo would enable the carrier to open new longer-haul routes to Australia, India and northern Japan. Mr Kingshott, however, said last week that the main driver in Cebu’s decision to order the A321neo is the attractive seat economics the stretched aircraft will offer on existing routes. “It’s less about the additional range and the markets it offers,” he explains. “It’s much more about how much a game changer it is in terms of costs.”

Cebu Pacific does not anticipate having any problems finding routes for the larger A321neo, which will be configured with 220 seats. Mr Kingshott says several existing routes - including Manila to Hong Kong, Cebu and Davao – are now served with several frequencies, indicating a larger aircraft could be used.

Cebu Pacific does not see any reason to slow down growth even as local competition further intensifies. Cebu Pacific has an advantage in that it already is the largest carrier in the Philippines in terms of seat capacity. 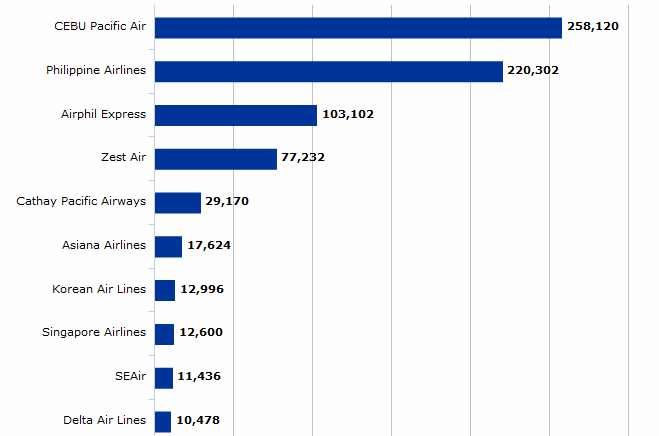 AirAsia Philippines to impact SEAir and Spirit of Manila

AirAsia’s launch at Clark will more likely have an impact on the two existing Clark-based carriers, SEAir and Spirit of Manila. Clark sits in a free trade zone and has an open skies policy while Manila faces significant bilateral and slot restrictions. As a result rapid capacity growth at Clark will likely be generated as both AirAsia Philippines and SEAir/Tiger expands.

As a new entrant it will be difficult for AirAsia to get access to Manila International. Access wouldn’t be as much an issue for SEAir because it already operates turboprops from Manila but as its existing A320s are leased from a foreign carrier, Singapore-based Tiger, it requires regulatory permission to operate them from Manila.

All of SEAir’s existing Tiger-branded Clark routes will face new competition from AirAsia Philippines. SEAir recently applied to serve from Clark three Malaysian destinations – Kuala Lumpur, Kuching and Kota Kinabalu – and may add the routes in 2H2011 if it does not receive approval to operate its next two A320s domestically from Manila. If launched, the new Malaysian routes would further intensify competition between SEAir-Tiger and AirAsia as Malaysia AirAsia already operates daily flights to Clark from Kota Kinabalu and Kuala Lumpur.

There is huge demand in the Philippines-Malaysia, Philippines-Singapore and Philippines-Hong Kong/Macau markets given the huge Filipino migrant worker populations in these countries. But there is already a plethora of seats in these markets and extremely low fares may be needed to stimulate enough demand to cover the capacity increases, particularly at Clark.