AirAsia expects to raise up to USD190 million through share sale, easyJet to save GBP125 million

AirAsia has requested a suspension of share trade this morning, pending the announcement on the results of its bookbuilding exercise.

The LCC expects to raise up to USD190 million from the sale of 400 million new shares, representing 16.7% of existing shares, to be used to reduce debt resulting from its fleet expansion.

AirAsia X meanwhile stated it has sold over 75,000 tickets for the Kuala Lumpur-London Stansted service within six months of launching the launch, with load factors of over 85%. CEO, Azran Osman-Rani, stated the strong traffic is a “testament to the fact that there is a strong appetite for low-cost, long-haul travel despite the tough economic conditions”. He told holidayextras.co.uk,"our model hinges on the extensive multi-hub route network and means that we are able to offer the same connectivity as a normal legacy network carrier, but without the cost and complications of running a traditional hub".

easyJet focuses on plans to save GBP125 million p/a

easyJet shares declined 1.3% yesterday. The carrier announced plans to offer pilots and cabin crew unpaid leave, as part of a broader drive to save GBP125 million p/a by Sep-2011. The carrier also plans to upgrade its IT system to improve staff rostering and hire new crew on fixed-term and seasonal contracts rather than offering them permanent contracts. 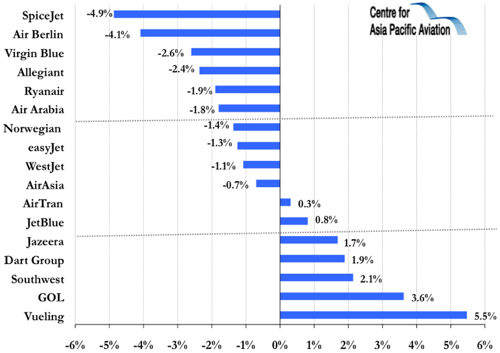