The state-owned carrier plans to add more aircraft and up-gauge key domestic services to Boeing 737 in 2013 to keep pace with a growing economy and competitor Airlines PNG. But the financially strapped carrier is struggling with poor on-time performance while also being criticised for charging excessive fares. Deregulation has brought some domestic competition, but airlines from neighbouring Philippines and Solomon Islands are struggling to break through protectionist barriers.

Aviation provides the single most important form of transport in the mountainous country which lacks a major road network linking the capital, Port Moresby, to other major centres. But the poor state of aviation infrastructure including runways and terminals poses a substantial hurdle to expansion of air services.

But Air Niugini is struggling to cope with its rate of growth and the constraints of a weak balance sheet. The carrier is beset with poor customer satisfaction and on-time performance (OTP) dropping to just 45%. That prompted the management to launch a 90-day intensive effort in Feb-2013 to improve customer and OTP performance, ahead of the appointment of a new CEO.

Air Niugini is searching for a new CEO to replace Wasantha Kumarasiri who is now MD of the Independent Public Business Corporation which oversees the operations of all state-owned entities. Former Air Niugini executive and director, Simon Foo has been appointed acting CEO. A permanent CEO is expected to be appointed in May-2013.

Air Niugini operates a domestic network of 22 destinations from its Port Moresby hub as well as 10 international routes across Asia-Pacific, including Australia, Singapore, Philippines, Hong Kong and Japan. 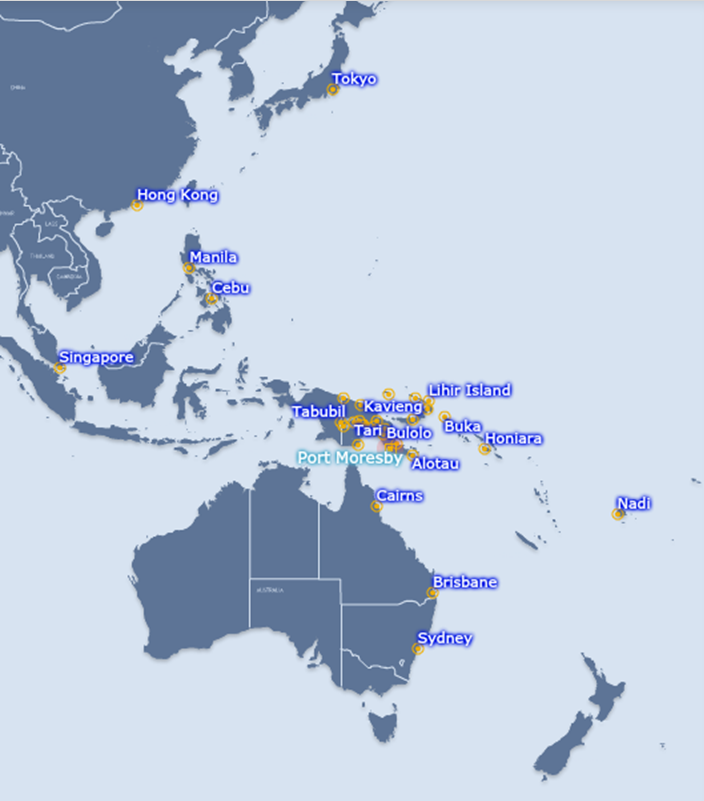 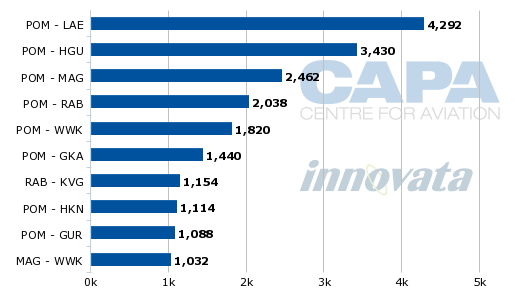 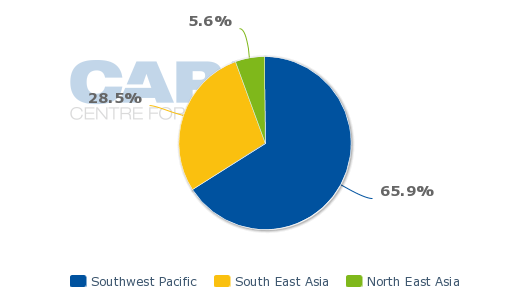 Port Moresby-Brisbane is the carrier’s biggest international route by some margin, offering about 4,500 one-way seats per week, nearly three times the size of Port Moresby-Singapore which is the second largest route with about 1,700 weekly seats, according to Innovata. 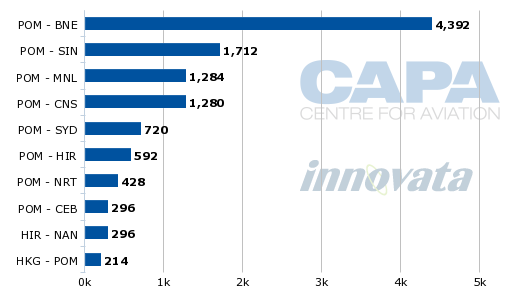 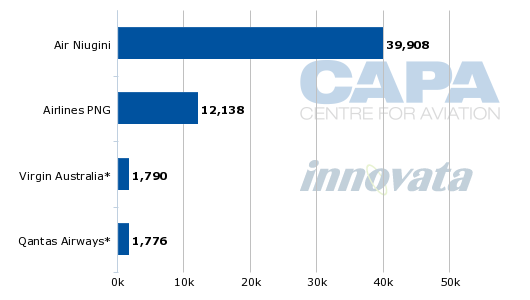 Poor airport infrastructure and high airfares are holding back tourism

One of the greatest impediments to Air Niugini’s growth is the rundown state of many of the nation’s airports, inadequate facilities and security. Operations are regularly suspended to certain destinations due to safety concerns such as broken bottles on the runway.

PNG Civil Aviation Safety Authority (CASA) reportedly told a transport and infrastructure sector committee in Feb-2013 that just eight national airports were certified to operate this year due to a lack of funding to carry out inspections. These included Buka, Gurney, Hoskins, Kavieng, Momote, Tokua, Wewak and Port Moresby. Certifications for all the airports except Hoskins expire later in 2013. Hoskins’ expiry date is early 2014.

Several airports need to be upgraded to accommodate aircraft larger than the Fokker 100 and of the five airports that Air Niugini plans to up-gauge to Boeing 737s, Manus, Lae, Kokopo, Alotau and Wewak, just one has the capacity to handle the aircraft while the other four were marginal, according to CASA.

High air fares and hotel costs are also holding back expansion of PNG’s tourism industry. The country offers a host of adventure tourism attractions including the challenging Kokoda Track and spectacular diving in waters teaming with life. The government has given a commitment to encourage more competition to reduce the cost of domestic and international air travel, to grow an industry that PNG Trade, Commerce and Industry Minister Richard Maru believes should be PNG’s largest industry. But that is not the first time verbal commitments have been made.

Mr Maru said the government would take a harder line with state-owned monopolies to ensure they served the best interests of the people. “Any attempts to frustrate Cebu Pacific Air and interest from New Zealand and Indonesia to have direct flights into PNG will not be tolerated,” Mr Maru reportedly said.

Yet the government proposed to merge Air Niugini with its only domestic competitor, Airlines PNG, in 2011, arguing that a single larger carrier would significantly expand domestic air services beyond the 32 airports serviced at the time.

The plan, which faced stiff public and union opposition over concerns that it would lead to higher fares and job losses, was scrapped in Oct-2011 after the crash of an Airlines PNG Dash-8 aircraft near Madang, killing 28 of the 32 people on board.

Air Niugini plans to expand its fleet of 25 aircraft, including a mixed jet fleet of Boeing 737s, Boeing 767-300ERs and Fokker F-28s, as well as various Bombardier Dash-8 models. The carrier said in Nov-2012 that another six aircraft would be added in 2013 with the addition of two 737s, three Q400s and a Q300, taking the fleet to 31. These are presumably to be sourced from leasing companies or other airlines, as the carrier has no scheduled deliveries. Air Niugini also has a Boeing 787 on order for delivery in 2017.

Former Minister for Public Enterprises Sir Mekere Morauta said in Jul-2012 that Air Niugini required a cash injection of at least PGK800 million (USD373 million) to refleet with appropriate aircraft and allow the airline to provide a reliable and affordable service.

Air Niugini dominates the domestic market, but Airlines PNG is rising to the challenge

Air Niugini has a monopoly on 17 of its 32 routes including 11 domestic and six international routes. It dominates its only rival, privately-owned Airlines PNG, on all but two of the domestic routes where they compete, Tabubil and Daru.

Airlines PNG will increase its capacity further in Jul-2013 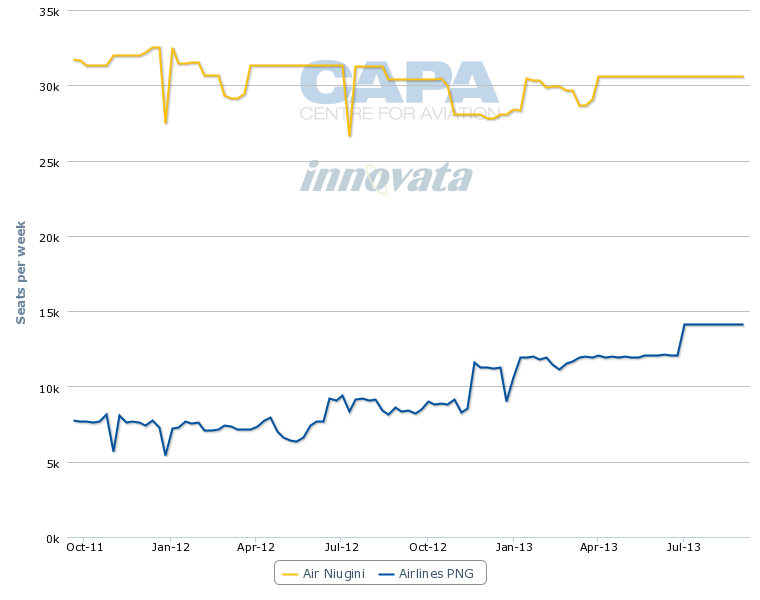 Air Niugini has responded to increased demand on its domestic network with the introduction of Boeing 737 services, starting with a weekly Port Moresby-Manus Island service in Nov-2011. A second weekly service is operated by a Fokker 100. The 737 also operates two weekly frequencies on Port Moresby-Lea which is served three times daily and four times on Mondays by a mix of aircraft. Kokopo, Alotau and Wewak are expected to be added.

Previously the Boeing 737s operated only on international routes to Cebu and Brisbane.

Outside of Australia, Air Niugini has a monopoly on all its other international routes. The carrier operates four times weekly between Port Moresby and Singapore, as well as weekly services to Hong Kong and Tokyo Narita, all using Boeing 767-300ERs.

Airlines PNG and Virgin Australia operate a codeshare on Virgin Australia’s flights between Port Moresby and Brisbane. The PNG Independent Consumer and Competition Commission has given draft approval in Mar-2013 to renew the agreement which it considers will provide competition to Air Niugini/Qantas codeshare, operated by Air Niugini, on the route. 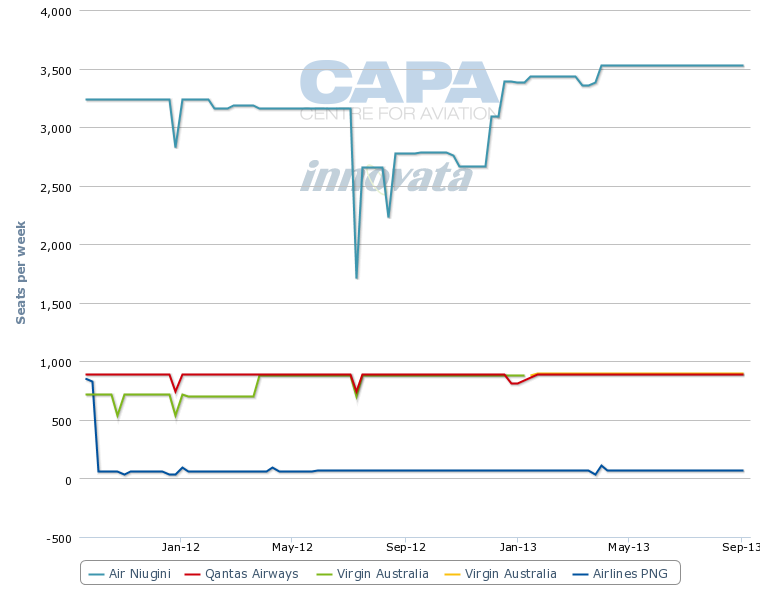 Philippine LCC Cebu Pacific Air is being prevented by protectionist PNG policy - as arbitrarily applied at bureaucratic level - from entering the Manila-Port Moresby market in competition to Air Niugini.

In Oct-2012, Cebu Pacific was granted rights to operate 300 seats per week between Manila and Port Moresby. However, the LCC had originally asked for 540 seats and has renewed its request for another 240 seats, citing the existing allocation as too limited. Philippine Airlines also has a 300 seat entitlement but has not operated them.

Air Niugini offers about 800 one-way seats per week between Port Moresby, Manila and Cebu, providing access for hundreds of Filipinos working at the multi-billion dollar liquefied natural gas (LNG) project as well as fisheries and other industries.

Trade Minister Maru has expressed his outrage at PNG’s slow response to Cebu’s request, saying Air Niugini’s domination on the route had resulted in expensive fares.

Air Niugini and Solomon Airlines have been in negotiations for a number of years to codeshare on a Honiara-Port Moresby service. Air Niugini is the only carrier on the route which it operates twice weekly with a Boeing 737-700, offering 296 one-way seats per week. The service also continues on to Nadi. It will increase capacity on the route to 328 weekly seats in Apr-2013 when the route is up-gauged to a 737-800.

Air Niugini has cited the ICCC as the main obstacle to a codeshare agreement with Solomon Airlines which briefly operated on the route in 2012, according to Innovata. An agreement in 2009 was to allow Solomon Airlines to buy 10 seats on each flight in each direction between Port Moresby and Honiara, but the deal never eventuated.

Moves are afoot to revive a direct New Zealand-PNG link

Mr Maru said in Nov-2012 that there were enough New Zealand contract workers employed in various resource sector projects in PNG to fill half the seats on a weekly flight. The remaining seats could be targeted at tourists from New Zealand, especially Kokoda trail hikers, according to Mr Maru.

The Auckland-Port Moresby-Hong Kong route operated in the 1980s as a tripartite agreement with Air NZ and Cathay Pacific.

PNG has rich natural resources with mineral deposits, including copper, gold, oil and gas, that are attracting large foreign investment and has allowed the largely undeveloped country to escape the effects of the global financial turmoil.

Construction of a liquefied natural gas (LNG) production facility by an American-led consortium has the potential to double PNG’s GDP when it begins exporting in 2014 and triple the country’s export revenue, according to the CIA World Factbook.

The government is also keen to develop a tourism industry that is in decline due to the high cost of accommodation and fares as well as security issues.

But as so often occurs in these circumstances, an under-performing, under-funded national flag carrier remains the pivot for aviation policy, distorting other economic objectives. As resources exports grow, the opportunity exists to stimulate the country's aviation capability - including badly needed infrastructure upgrades - but fractured policy making tends to mean that, by default, protectionism is the underlying driver.

With adequate government support, a restructured Air Niugini should be well placed to take advantage of the economic growth opportunity. But meanwhile the lack of competition, particularly to Asia, and the resulting high fares will continue to put PNG at a disadvantage to other cheaper-to-access holiday spots in the region.