ANA's gains came despite the carrier reporting strong reductions in domestic and international passenger numbers of 13.1% and 16.7%, respectively, in May-2009. Load factors also slipped, by 4.8 ppts to 6.7 ppts, respectively, to a concerningly low 57.4% and 63.5%, with cargo traffic also suffering, down 5.9% domestically and 14.1% internationally. 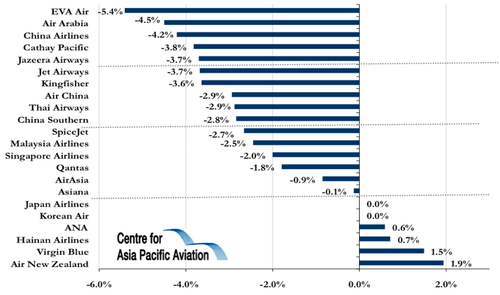 Meanwhile, Malaysia Airlines' shares dipped 2.5% after the carrier posted its first operating quarterly loss (of USD39.3 million) since 3Q2006, due to a "triple squeeze" [of] overcapacity, extreme fuel volatility and a global slump which hit passenger and cargo demand". The stock was also downgraded from "neutral" to "underperform" by Credit Suisse Group, due to the carrier's current negative equity position.

Qantas' shares were also down, by 1.8%. The carrier has announced plans to boost trans-Pacific services in preparation for the launch of Delta Air Lines services on the route next month, increasing A380 services between Australia and Los Angeles and expanding its codeshare agreement with American Airlines. The move will place further pressure on yields on the route and on Virgin Blue's struggling long-haul carrier, V Australia, which has already reportedly reduced frequency on the Sydney-Los Angeles routes four months after the launch of the service.