Air New Zealand reported that group-wide yields for the financial year to date have increased 4.5% year-on-year. Short-haul yields in Aug-2010 were 1.1% weaker on a year-on-year basis, as the airline continued to lower fares which stimulated demand, while respective long-haul yields increased 11.5%. Removing the impact of foreign exchange, group-wide yields were up 8.9%.

In other cooperation news, ANA and TAM Airlines announced the Star Alliance carriers will bolster their relationship through a new codeshare agreement commencing 15-Oct-2010, on services to connect Tokyo and Sao Paulo via London. Shares in China Southern and China Eastern gained 4.6% and 6.5% respectively yesterday, while ANA shares slipped 1.6%.

Also in the region, Cathay Pacific signed an agreement with Boeing to exercise purchase rights for six more B777-300ER aircraft with an estimated value of HKD12.5 billion (USD1.6 billion) at list price, for delivery in 2013 and 2014. The additional six aircraft will increase the airline’s total order for the type to 36. Cathay Pacific slipped 1.2%.

Shares in Kingfisher Airlines slumped 5.1% yesterday, despite ICICIdirect recommending an "add" rating, a revision from a "reduce rating" on the stock with an increased target price of INR71.

The company commented: “Kingfisher Airlines is planning a debt restructuring programme that may include fund raising through issuance of equity shares, preference shares or GDRs in order to reduce its debt burden, which stood at INR7414 crore at the end of Q3FY10. We believe Kingfisher will be the primary beneficiary of the RBI’s positive response on the sector’s debt restructuring plans which will help the company in its fund raising initiatives. We have changed our outlook on the stock due to a strong improvement in the domestic market and significant effort from the management to improve its financial positions."

ICICIDirect also recommended a "buy" rating on Jet Airway stock, an upward revision from a previous "add" rating, with an improved target of INR850. The company stated: “Jet Airways has already received approval from the Cabinet Committee on Economic Affairs for a QIP worth USD400 million in order to fund its capacity expansion plans and repay debt. Also, in the annual general meeting held in August 2010, the management has announced the partial dilution of the promoter’s equity (up to 20%) in the near future.” 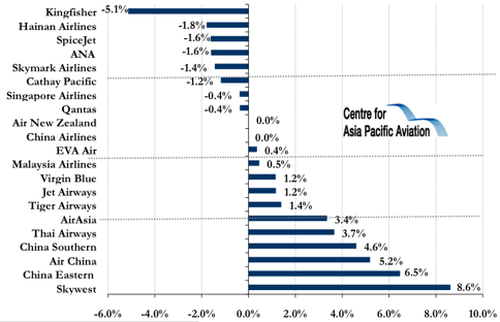 Source: Centre for Asia Pacific Aviation, Reuters & Financial Times
*It was a public holiday in South Korea on 21-Sep-2010