After restoring its long-haul network to profitability and reporting a 300% increase in underlying profit for the first half of FY2013 Air NZ is focusing on developing a partnership-based Pacific Rim network.

The carrier has forged an alliance with Cathay Pacific on the Auckland-Hong Kong route and consolidated its China mainland capacity to Shanghai, dropping Beijing. Capacity to North America has been increased partly taking advantage of being handed a monopoly on the trans-Pacific after Qantas pulled its Melbourne-Auckland-Los Angeles service in May-2012, redeploying the A330 capacity in the Australian domestic market to support its domestic battle with Virgin Australia.

Closer to home, a new short haul fleet of A320s and ATR72-600s are arriving to drive domestic growth and keep a menacing Jetstar at bay.

Under Air NZ’s new CEO Christopher Luxon the carrier will focus on developing a Pacific Rim network supported by strategic partnerships with carriers in key markets such as Virgin Australia, Cathay and All Nippon Airways.

Air NZ operates a network of 51 destinations, half of them domestic routes. London Heathrow is the furthest point operated from the carrier’s Auckland base and the only long-haul destination beyond the Pacific. 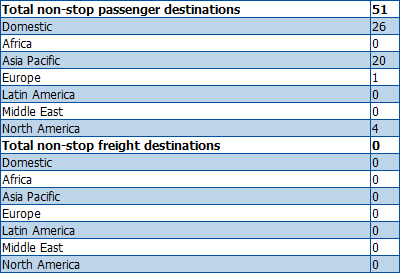 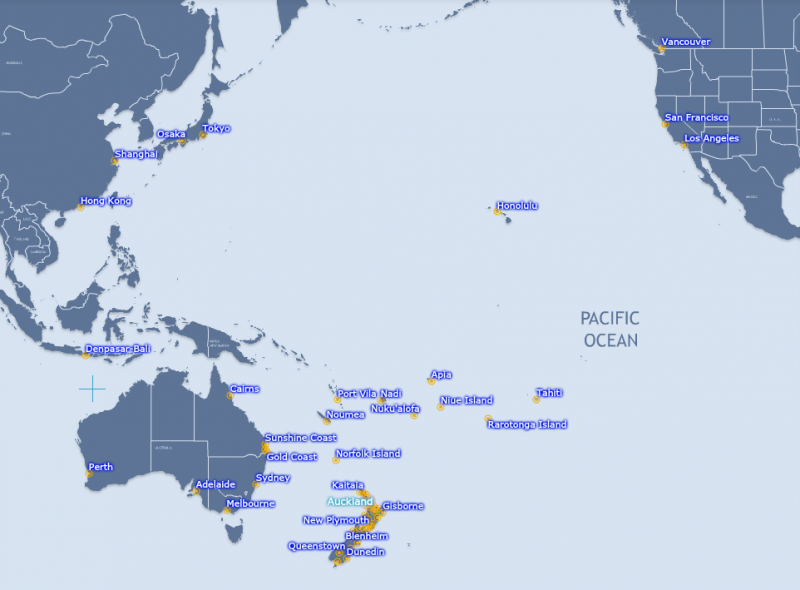 Air NZ moved to daily Auckland-Shanghai and Auckland-Tokyo services in Jan-2013 as both the Chinese and Japanese markets show strong growth in visitor numbers to New Zealand.

China is now New Zealand’s second largest inbound tourism market after Australia with the market growing 38% in the year to Feb-2013 to 209,700, according to Statistics New Zealand data.

Visitor arrivals from Japan are also recovering, gaining 16% to 74,100 arrivals in the Feb-2013 year. But this is still well down on the 89,100 visitors in the Feb-2011 year, before the devastating Japanese earthquake and tsunami in Mar-2011.

But Air NZ has struggled to make headway in China and consolidated its mainland China services to Shanghai, dropping the twice-weekly Auckland-Beijing service in Jun-2012. Air NZ competes with China Southern Airlines which operates daily Auckland-Guangzhou. Competition could increase with China-New Zealand bilateral air services agreement expanded in Apr-2012 to allow airlines from each country to operate 21 weekly flights.

Air NZ has entered into an alliance with Cathay Pacific under which the two carriers will codeshare on each others’ services between Auckland and Hong Kong. At the same time, Air NZ pulled off the loss making Hong Kong-London route in Mar-2013 and will lease the daily Heathrow slot to Cathay which it will begin to operate in Jun-2013. Air NZ hopes the relationship will eventually gain it greater access to the Chinese market.

The Cathay tie-up is an extension of Air NZ’s strategy to increase its network reach through alliances. Air NZ also switched partners in Japan from Japan Airlines (JAL) to Star Alliance’s All Nippon Airways (ANA), gaining greater access to the Japanese domestic market. 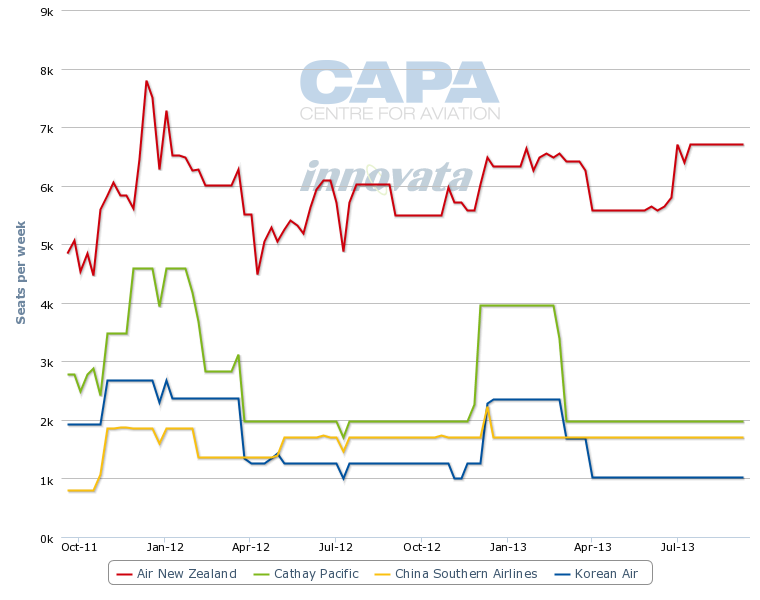 The United States is becoming an increasingly strong market for Air NZ as the US economy gradually recovers and competition has reduced due to Qantas pulling off Auckland-Los Angeles in May-2012.

United States visitor arrivals to New Zealand increased 1.9% for the year to Feb-2013 to 105,704 according to Statistics New Zealand data.

Air NZ has seen demand on the North American/UK sectors in the eight months to Feb-2013 of FY2013 increase 6.4%, measured as RPKs, against a 2.9% capacity increase, measured as ASKs. This has resulted in load factors improving 2.8ppts to 86.7%.

The carrier has previously indicated Denver and Houston as possible network additions that could be served by 777-300ER. Both cities have the added attraction of being hubs of fellow Star Alliance member United Airlines, providing large network feeds.

Continental had planned to operate the route with a 787-8 before its merger with United. However the post-merger United cancelled those plans earlier in 2012, which would have seen it re-enter New Zealand.

Officially the decision was blamed on Houston allowing competitor Southwest to build an international terminal at the city’s smaller Hobby Airport. But it is more likely the decision was due to United’s desire to use the 787s to replace older aircraft rather than open new routes, and Air NZ’s lukewarm reception to a competing service on which it was to codeshare and provide critical onward feed from Auckland.

Competition has however arrived in the form of Hawaiian Airlines which launched three times weekly Honolulu-Auckland services in Mar-2013 with a 294-seat A330-200 aircraft against Air NZ’s three-times weekly 230-seat Boeing 767-300 offering.

Hawaiian believes there is significant growth potential on the route, pointing to the 30% reduction in passenger numbers after the introduction of the 747-400 allowed Air NZ to operate direct Auckland-Los Angeles services, dropping Honolulu as a refuelling stop over. 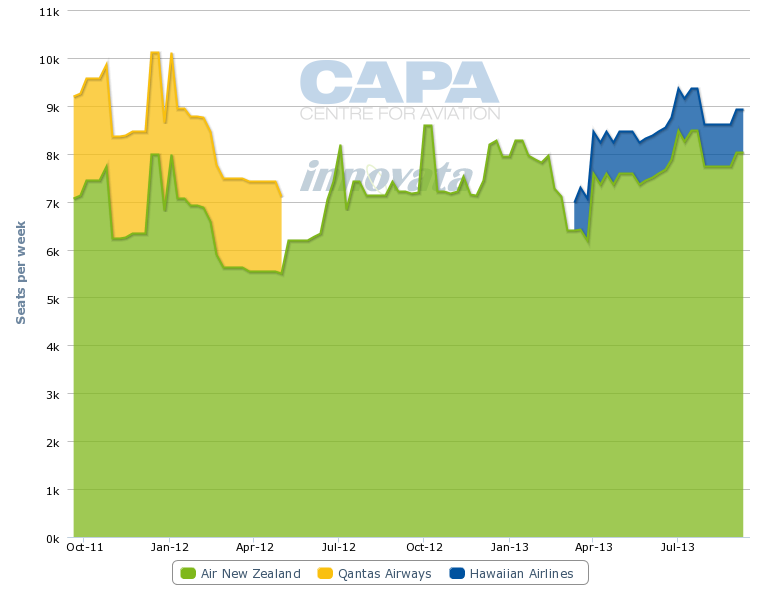 While the long-haul network receives most of the popular attention, Air NZ makes its money on its short-haul routes, especially in the domestic market.

Air NZ is adding significant capacity to the domestic network including replacing its fleet of 737-300s with A320s which will reduce its cost base to better compete with Jetstar on the main trunk routes between Auckland, Wellington, Christchurch, Dunedin and Queenstown. Jetstar has carved out about a 30% market share on those routes, applying pressure on domestic yields.

Air NZ will strengthen its monopoly hold on the regional network with the addition of seven 68-seat ATR72-600 turboprops, two of which have already been delivered and will add about two million regional seats per year to the market when the fleet is in place in 2016. 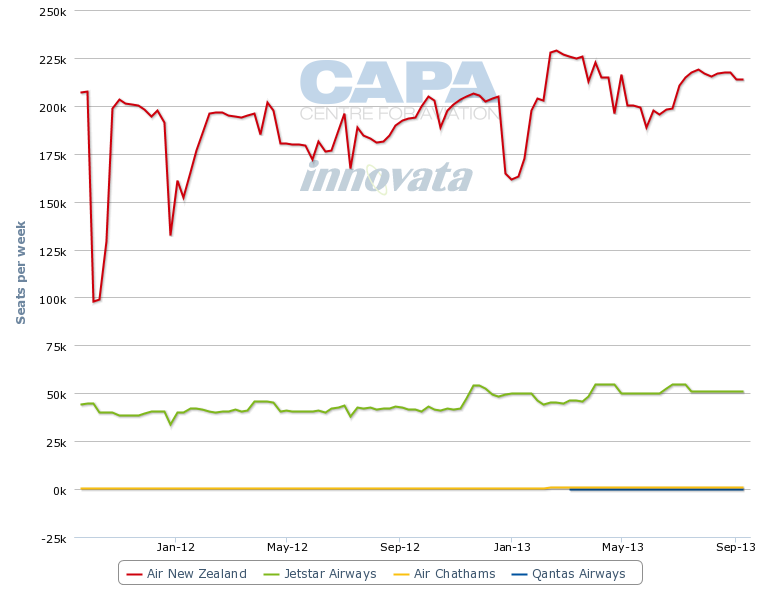 On the trans-Tasman routes the successful Air NZ/Virgin Australia alliance looks set to face the combined might of Qantas and Emirates which have received approval from the Australian Competition and Consumer Commission, to extend their global alliance to New Zealand, effective 31-Mar-2013. The approval was conditional on the carriers maintaining their pre-alliance capacity on four overlapping trans-Tasman routes; Auckland-Sydney, Auckland-Melbourne, Auckland-Brisbane and Christchurch-Sydney. These routes account for around 65% of total passenger capacity between Australia and New Zealand

Approval is still required from the New Zealand Minister of Transport before the trans-Tasman part of the alliance can take effect.

Air NZ operates the greatest capacity on the Tasman and with Virgin Australia the pair has a collective capacity share of just over 51%. Qantas and Emirates will have a combined capacity share of 36%, but that increases to about 44% when Jetstar is included.

The alliance with Virgin Australia, in which Air NZ also has a 19.99% stake, has been hailed a success, growing capacity and demand. But the partnership only extends to trans-Tasman services and Air NZ will need to seek a more expansive position behind its Australian gateways if it is to hold a growing Jetstar at bay in the long run. 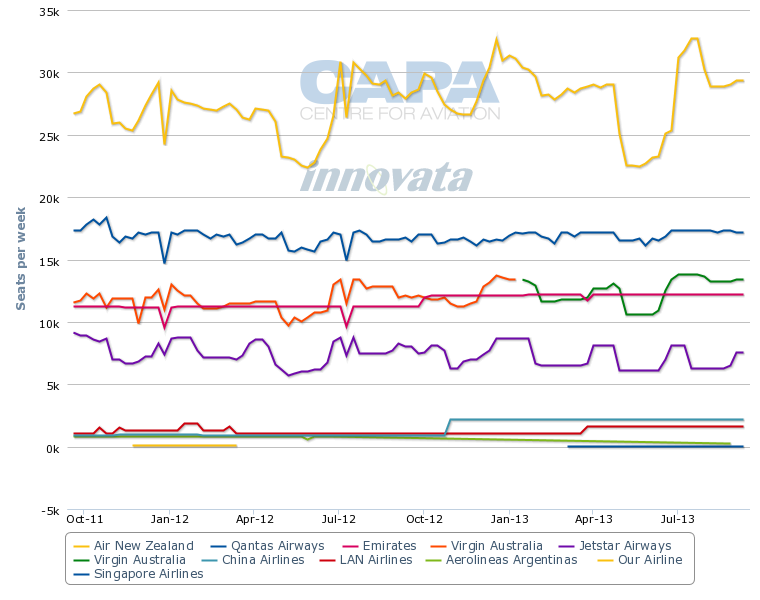 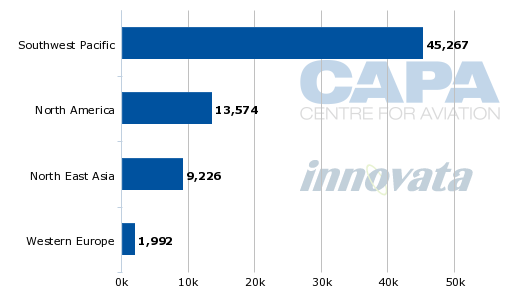 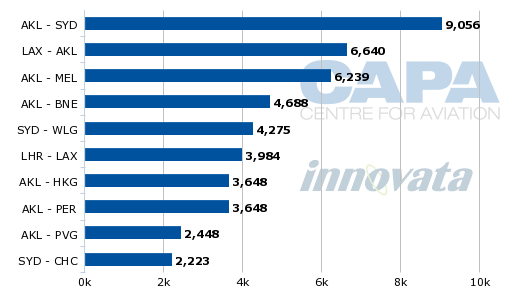 The carrier is still mulling over how the additional 777-300ERs will be deployed, but options include adding capacity to existing routes or opening new destinations in the Americas, Asia or Australia.

Longer term the carrier is evaluating the A320neo and 737 MAX families as replacements for the existing narrowbody jet fleet. Air NZ is also considering its options for replacing the short-haul international A320 fleet which come up for replacement from 2015. A timing mismatch between the availability of the A320neo and 737 MAX means an interim solution will be required. One possibility is short term leases of new A320s to bridge the time gap to 2021 when the next generation models will be available.

An even more difficult issue is finding a replacement for the 19-seat Beech 1900Ds which complete Air NZ's coverage of all levels of regional routes. These have an average fleet age of 11.2 years and are no longer produced and there is no suitable alternative with a pressurised cabin.

Air NZ has begun to deliver on the significant investment and is now back in “growth mode” as it looks to expand its Pacific Rim business. The carrier has had the balance sheet strength – and the courage – to invest in aircraft and product at the most effective stages in the economic cycle.

The carrier will now implement its “Go Beyond Plan” which calls for building on its strong platform over the next five years, although precisely what form that will take remains to be seen.

As the new domestic fleet comes in, along with the long awaited 787-9, allowing Air NZ to expand its business, unit costs should reduce further, allowing the carrier to realise the returns on an investment and strategy that has been several years in the making.

There will however be no reduction in the intensity of competition on all fronts, with Hawaiian Airlines and the new Qantas-Emirates trans-Tasman combination making the already competitive trans-Tasman that much tougher.

As its partnerships are expanded they will bring greater confidence, but access to the Australian domestic market is one important piece of network coverage for Air NZ remaining to be put in place.