Air New Zealand reported a more than doubling of net profit in the six months to 31-Dec-2009, as the carrier reduced costs in response to declining passenger demand and yields. However, the carrier has warned of a weaker, yet profitable, result in the second half, echoing comments made earlier this week by Virgin Blue and last week by Qantas. 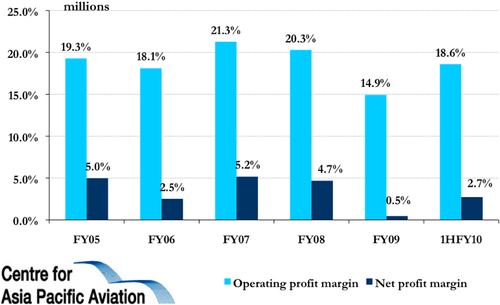 Cost reductions across the board

As part of this, the carrier reduced non-fuel operating costs by 11%, as the carrier reduced full-time staff numbers by 5% and reduced overtime worked by 11%, operated smaller aircraft, reduced capacity on long-haul routes by 8.7% (and by 8% network wide), prompting CEO, Roby Fyfe, to comment, “we have become more efficient than ever”. 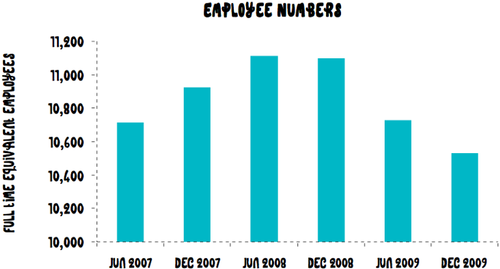 However, the fallout from the global economic crisis has continued to make operating conditions difficult for the carrier, with passenger numbers, cargo volumes and yields all negatively affected.

During the six-month period, Air New Zealand Group reported a 9.7% reduction in yields (cents per RPK), with these lower fares resulting in a reduction in revenues of USD174 milion (traffic reduced revenues by a further USD28 million). Short-haul yields were down 9.2% and long-haul yields slumped 12.5%. 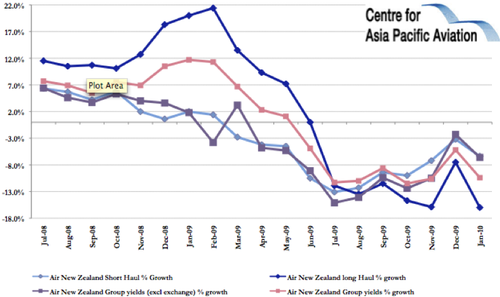 Passenger demand bottoms out in 1HFY2010, with signs of demand recovery

Despite the 80% reduction in overall capacity (ASKs) in the period, passenger levels remained stable at 6.3 million passengers (of which 87% were on short-haul services), with a passenger load factor of 81.6% (+3 ppts).

CEO, Rob Fyfe, added that passenger demand “does seem to have bottomed out in the first half of the 2010 financial year and volumes have shown good signs of recovery since, although at significantly lower yields”. However, despite signs of recovery on US routes, the carrier commented that demand (which was down 7.3% in the six month period) has remained weak on Asian routes. 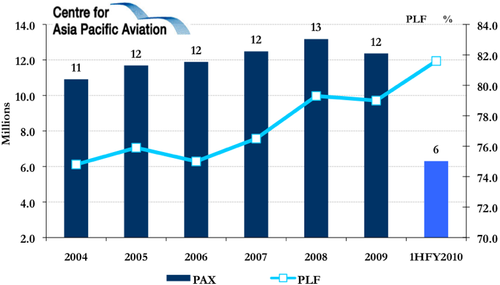 Mr Fyfe added that the Tasman and Pacific Island markets continues to be challenging, with “intense competition”. Passenger demand was down 2.9% and ticket prices were “significant reduced” in the six months to Dec-2009. He added that “unstable market dynamics have persisted in the Tasman market as airlines take on fifth freedom flying at marginal cost” - in a not too subtle dig at Emirates.

Looking forward, Air New Zealand plans to continue to evolve its trans-Tasman and Pacific Island operation, introduce more capacity into its domestic jet operations with the arrival of new A320 aircraft, and introduce its new long-haul product. The carrier is scheduled to receive three B777-300ERs and two A320s in FY2011.

According to Mr Fyfe, the next 12 months will be “one of the most defining in Air New Zealand’s history. It will set the direction and identity of our airline for the next decade”. See related report: Couches, cougars and contraction: Air New Zealand downsizes to survive in the jungle