Air India: the time has come to stop procrastinating and act. The final scene is near

Air India has delivered a significant improvement in its operational and financial performance in FY2013, partly due to improved market dynamics following Kingfisher’s exit, but also as a result of a serious and committed approach by the management of Air India, new marketing initiatives and measures adopted to rationalise its network.

But India's ageing flag carrier is still soaking up over a billion dollars of India's precious budget each year – with no prospect of a serious turnaround for the airline in its present form.

The easiest path for India's leaders to take is to avoid facing the problem and to keep applying a hundred million dollars of taxpayers money each month to apply bandaids to the ailing airline.

Pricing discipline has been the most significant contributor to the improved performance. And over the last 12 months Air India’s domestic market share has increased from approximately 14% to 20%. The carrier may even report a small operating profit for the current financial year ending 31-Mar-2013 subject to the impact of the B787 grounding and market conditions in 4QFY2013. However, the net result will remain significantly in the red.

But despite these improvements, deep structural issues remain. As a result, in the five years from FY2008 to FY2012 inclusive Air India accumulated losses of close to USD5.25 billion, a figure which it is estimated will increase by a further USD950 million or more by the end of FY2013. International routes are bleeding particularly badly and account for 80-90% of losses. 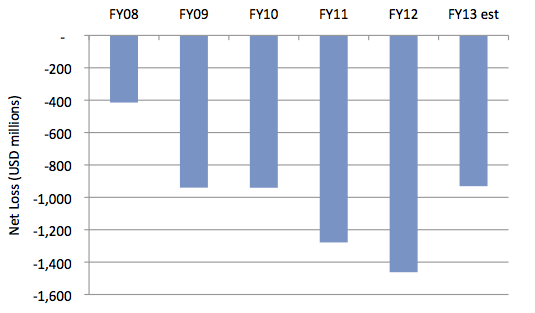 Piecemeal recapitalisation weakens turnaround efforts: The government has committed to fund the carrier’s turnaround plan. However rather than infusing capital on a one-time basis, it is drip-fed in over an uncertain schedule. When each small tranche is received it is largely absorbed by overdue vendor and salary payments rather than being utilised to implement turnaround initiatives. As a result the recapitalisation efforts are not providing the strategic stability required.

Debt level imposes huge interest burden: Air India’s bank loans and aircraft-related debt total approximately USD9 billion, in addition to which there are vendor-related liabilities e.g. to fuel suppliers and airport operators, in excess of USD1 billion. In fact Air India’s debt is approximately twice that of all the other carriers in India combined.

The chart below highlights the fact that all of Air India’s competitors are in a far better position. The three LCCs combined account for just 4-5% of total industry debt and this is largely aircraft-related. Even Jet Airways’ position is improving, the carrier recently repaid over USD400 million of loans. The infusion of cash from the proposed stake sale to Etihad will be further used to reduce debt and interest obligations which in turn will improve its net profitability. 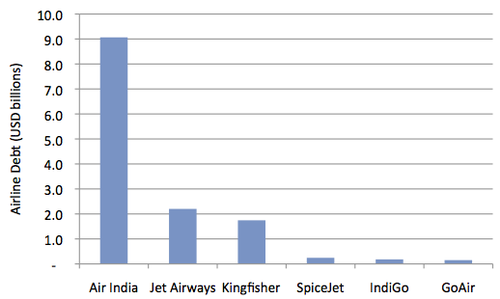 Sub-optimal aircraft utilisation: Air India’s fleet utilisation is very poor with only around 100 operational aircraft out of a total registered fleet of 127 aircraft (including Air India Express). And even those aircraft in service have daily utilisation rates below the industry average.

Recovery hampered by labour productivity: The productivity of Air India’s bloated workforce continues to be a major challenge. And the airline carries the historical baggage of unresolved issues related to the integration of employees during the merger of Air India and the former Indian Airlines in 2007. The implementation of the recommendations of the Dharmadhikari Committee set-up to look into this issue is likely to face resistance.

The prospect of industrial action is always in the background, especially for licensed staff such as pilots and engineers, which could be triggered by the introduction of proposed wage restructuring initiatives.

Meanwhile, Air India continues to lose B777 pilots and other skilled personnel to foreign carriers, and Air India Express is facing a shortage of B737-800 pilots. A further exodus of licensed staff, particularly to the Gulf, is expected which will place added pressure on turnaround plans.

Business model needs to be reworked: Air India requires a comprehensive review of its business model. At present there are fundamental weaknesses in each of its key domains. On its long-haul routes for example it does not have the commercial strength to drive the necessary yields and premium traffic volumes. In the regional international market it is focusing on routes to/from Kerala but neglecting the significant opportunities elsewhere.

While on the domestic front it faces a significant capacity crunch due to a limited fleet, which itself is dominated by an aircraft type that is not competitive on most of the routes that it operates. The absence of a domestic low-cost operation or a clear regional strategy means that it is not participating in the fastest growing segments of the market.

Government intervention: In addition to these huge challenges, the management of Air India has to deal with excessive intervention by the Ministry of Civil Aviation and other ministries in the carrier’s turnaround. This leaves little time or space to pursue strategic activities.

Without decisive action Air India will continue to decline

As a result of management initiatives and improved market dynamics Air India could post a small operating profit this year. But at a net level losses are still expected to be close to USD1 billion, albeit 20-30% less than last year.

Against the backdrop of a fast-changing environment and strengthening competition the concern is that this could be as good as it gets. Air India generates 80-90% of its losses on international routes. The Jet Airways-Etihad deal and the opening of bilaterals will surely exacerbate this situation.

Meanwhile, in the domestic market where Air India performs relatively well the carrier is faced with a serious capacity constraint due to a lack of aircraft and the absence of a low-cost arm to participate in the fastest growing segment of the market.

The likelihood is that despite the best intentions of Air India’s management, the carrier has an almost insurmountable challenge. Its domestic competitors will be increasingly strengthened by foreign airline investment, overseas carriers are likely to be granted greater access to the Indian market and meanwhile Air India itself will be politically hamstrung with regard to taking the difficult restructuring decisions required to develop a competitive cost base or investing in new fleet.

In this scenario the government will be faced with having to drip feed billions of dollars over the next few years to finance deficits with no meaningful improvement in the carrier’s situation. The government is already having trouble committing to the funding required.

This does not even take into account the investment that will be required in fleet modernisation and expansion over the next decade if the carrier is to maintain its share of traffic.  CAPA estimates that the airline will need to order 240-280 aircraft for replacement and growth consisting of approximately:

The cost of the above orders could conservatively be estimated at USD12-14 billion for which the government would need to extend a sovereign guarantee, something it is likely to be reluctant to provide at the current time. Air India as it stands today with all of its current challenges is not in a position to be able to take on such massive capital commitments.

One of the key economic challenges for the government today is to bring under control its large fiscal deficits. In this environment it is unthinkable that the government can commit to the level of funding necessary to support Air India’s capital requirements and operating losses, especially when there are multiple private operators willing and able to provide air transport service.

A solution requires transformational thinking, which has been sadly absent

If the carrier is to have any chance of success it must be radically restructured both financially and operationally. This will require a level of political will to take tough decisions, a feature which has been absent to date. Bold and pragmatic action is required to provide the airline with a fresh start and a fighting chance to compete. For the process to be successful it must be led by an MD that has the full backing of the government to make the necessary cuts, as was the case at both Malaysia Airlines and Garuda Indonesia.

Turning around a national carrier is a difficult and painful process. It is arguably more difficult today than it was 10 years ago because the global environment has changed so dramatically as a result of liberalisation, the advent of LCCs and the rapid growth of Gulf carriers. But if the necessary commitment exists it can be achieved. In the case of Japan Airlines’ bankruptcy in 2009 for example it was clear that incremental changes to the business would not deliver results and that radical surgery was required. The carrier retired 40% of its fleet and retrenched 16,000 employees and has successfully re-emerged from bankruptcy. A similarly aggressive approach is required at Air India. Sadly, a realistic assessment of the situation suggests that this is unlikely to happen.

However, if Air India was to take this path, pursuant to the restructuring it should be granted a level playing field with respect to access to foreign airline investment and be permitted to secure a strategic partner holding up to 49%. Over time the central government could reduce its stake to 26% with the remaining 25% to be transferred to other public sector units.

With an election looming in 2014 the current administration may be reluctant to take such a bold step and prefer to leave it for the new government to deal with. But Air India cannot wait 18 months, by that stage it will be too late to recover.

Given the importance and sensitivity of this issue, CAPA recommends that a bipartisan approach is required with a committee to be established with multi-party consensus to oversee the financial and operational restructuring of the airline. Under a special administration, as was established for Satyam, Air India has the best chance of turning around.

A viable and long-term solution for Air India is imperative not only for the airline itself but for the industry at large because as long as it struggles under government ownership it will continue to drive distortions in policy. With Indian aviation set to receive close to USD100 billion of investment over the next decade, and given the potential for a vibrant aviation sector to play a critical role in enabling economic development, such distortions are not in India’s national interests.

This analysis is an extract from the keenly anticipated 2013/14 edition of the annual CAPA India Aviation Outlook Report to be released on 31-Mar-2013.

The coming year will be a defining period for the long-term prospects of the Indian aviation market. In this complex environment, having access to up-to-date research and insights into the direction of the market is critical for any business with exposure to Indian aviation.

CAPA has a strong and established track record in accurately identifying key trends and developments in the Indian market. We operate India’s leading dedicated aviation advisory and research practice offering unrivalled analysis and data across the value chain.