The government of India has finally found a buyer for Air India, with Tata Group selected to take over the flag carrier as expected. But although Tata has won the bidding contest, it will face many challenges in operating the airline as a viable business.

The primary question will be how to move Air India towards profitability. Despite the sentimental appeal of returning the airline to the company that founded it in the 1930s, before its nationalisation in 1953, Tata Group will no doubt intend Air India to be a financial contributor at some point.

This would be quite some turnaround, as the airline was loss-making even before the pandemic arrived to decimate demand. Now it must contend with a potentially lengthy demand recovery period, as well as the continued rise of LCC competitors.

Tata Group will also have to align Air India with its other airline holdings and determine what degree of consolidation it can achieve.

India’s government has been attempting to privatise Air India for years, but it failed to find a suitable buyer.

Its latest attempt was launched in Jan-2020. To help attract investors it decided to split off part of the airline’s considerable debt burden into a government-owned holding company created for that purpose.

The government had planned to require purchasers to take on a fixed amount of Air India’s debt. However, in Oct-2020 the government altered these terms to allow bidders to propose how much of the debt they would take on as part of an enterprise value offer.

Seven expressions of interest were submitted by Dec-2020, but five of these were disqualified as they did not meet requirements. A formal request for proposals was issued in Mar-2021. The deadline for formal bids was 15-Sep-2021, after a three-month extension due to the COVID-19 crisis.

The two contenders were Tata Group and a consortium led by SpiceJet backer Ajay Singh, although Tata Group was widely considered to be the favourite.

Both offers met the reserve price of INR129 billion, and Tata’s was selected. The next steps include signing a share purchase agreement, with the deal expected to close by Dec-2021.

LCC subsidiary is part of the deal, while non-core assets and most of the debt are excluded

Included in the sale are Air India’s LCC subsidiary Air India Express and a 50% share of the ground handling company AISATS. However, non-core assets worth INR147.2 billion, such as certain properties and buildings, are not included. These non-core assets will instead be transferred to the debt holding company established by the government.

As part of its enterprise value offer, Tata Group will take on INR153 billion of Air India’s INR615 billion in debt.

Tata Group’s plans after takeover are yet to be revealed

It is not yet known exactly what plans Tata Group has for Air India after the purchase is completed. The company has made the right noises about wanting to return Air India to its glory days, but there are few details about what this will entail. The government has said that it has ensured that “the interests of the employees and retired employees [will] be taken care of.”

Splitting off much of Air India’s debt will take some of the burden off the airline, as simply servicing the massive debt was proving a severe handicap. But the airline will still owe significant amounts, and the new owners will presumably now have to renegotiate with creditors.

Air India faces pressure in the international and domestic markets

Air India was more exposed to international markets than many other Indian airlines when the pandemic hit. International services accounted for about a third of Air India’s weekly seats in early 2020, and 70% of its capacity as measured by available seat kilometres, according to data from CAPA and OAG.

Air India's full service competitor Jet Airways will be returning, but in a much smaller form initially. It could be some time before Jet rebuilds to the point of being a serious competitor on long haul routes. Vistara is another Indian full service carrier, but is part-owned by Tata.

On the domestic and short haul front, the growth of the LCCs remains a major headache for Air India.

India’s domestic market has been recovering well in recent months since the second wave of the pandemic subsided. Because of this, the government has progressively raised its cap on domestic services. Airlines were allowed to operate 85% of their pre-COVID capacity, but as of 12-Oct-2021 this was raised to 100%. 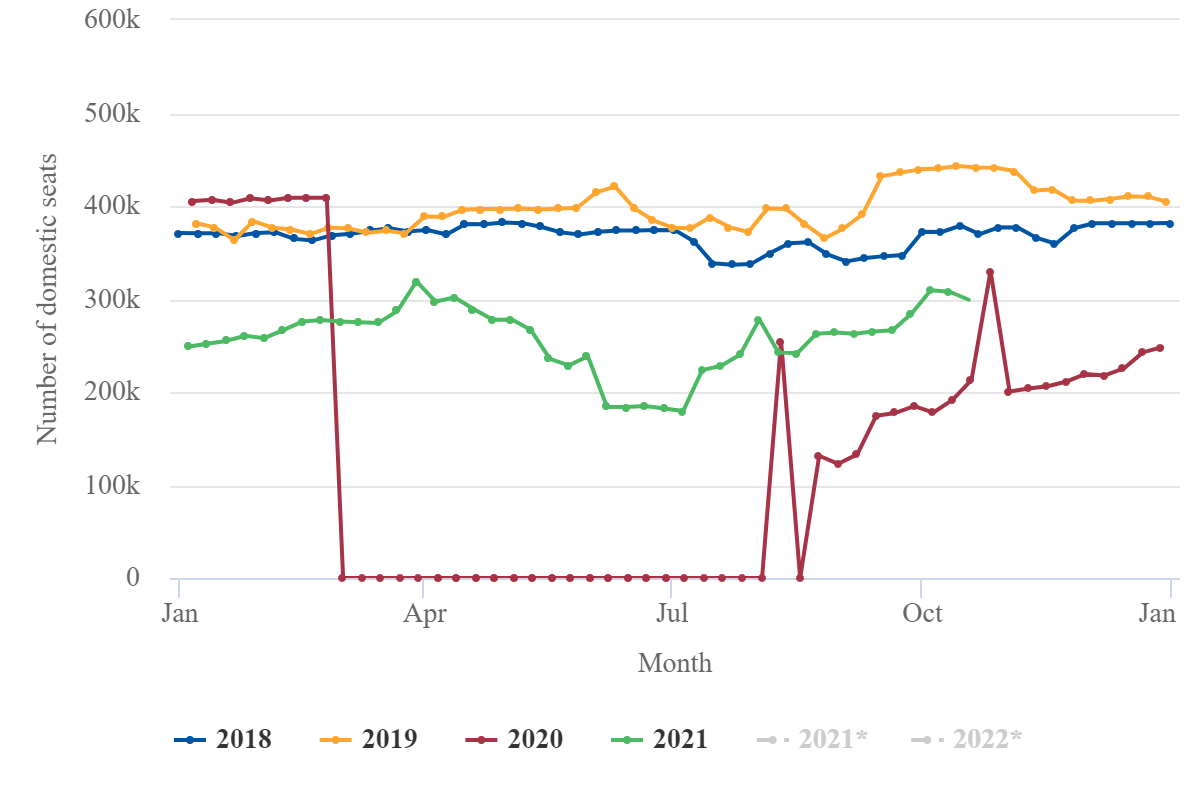 Fleet questions will have to be confronted sooner or later

At some point Air India’s owners will have to make some major decisions about its fleet.

While the airline does operate some relatively new types, such as Boeing 787s and Airbus A320neos, it also has some types and variants that are old enough that replacement plans will need to be considered. Currently Air India has no aircraft on order.

Air India's oldest aircraft are four 747-400s with an average age of 26 years, which are all in storage. There have been varying reports about whether the airline will return these to service or not after the pandemic.

As recently as Jul-2021 government aviation officials stressed that Air India would operate the 747s again, although it obviously would not be a surprise if the aircraft are retired. Before being grounded, they were mainly used for high volume domestic routes.

Air India’s Boeing 777 fleet has an average age of 11 years, so it will need to start thinking about replacement options. And while the bulk of its A320-family fleet comprises fairly new A320neos, the remainder are A320/A321/A319ceos. Most of the -ceos are in the 12-16 years age bracket.

Air India Express operates a fleet of 24 737-800s. This would be a complication for a merger with AirAsia India, which operates 34 A320s. Presumably any combination of the two would involve eventually phasing out one of the fleet types.

The A320 would appear to be the most likely type to focus on in the long term, as both Air India and Vistara mainly rely on that family for their narrowbodies.

Integrating Air India with other airline holdings is a key challenge

One of the first big steps for the Tata Group after the acquisition will be deciding on the relationship between its different airline interests. The group holds about an 84% share in the LCC AirAsia India, after acquiring most of AirAsia’s stake. It is also owns 51% of the full service carrier Vistara.

It seems likely that Tata will at least look to merge Air India Express and AirAsia India into a larger LCC. Such an entity would have a combined fleet of 58 aircraft, which would move it just ahead of Go First to be the third largest LCC in India.

Vistara is a more complex question, as any potential merger with Air India would require the agreement of its joint-venture partner Singapore Airlines, or a buyout.

A merger would probably be the desirable option for Tata Group, but SIA has remained bullish about Vistara’s prospects. Some form of cooperation between the airlines would be another option.

While some degree of consolidation within the Tata Group airline holdings is likely, it may take a while for a clearer picture to emerge. Such steps would help give Tata some of the scale advantages that it is obviously seeking in this sector. However, retaining separate LCC and FSC models appears the best option in the Indian market.

Tata Group got a good deal on Air India, when the equity portion of its bid is considered. But the airline also comes with a significant debt load. A return to profitability is unlikely until international demand fully recovers, and after that it will depend on what changes Tata brings to the airline’s strategy and business model.

The new owner will have to determine what the international and domestic focus will be for Air India, as well as for the other airlines it partly owns. This will help guide its post-pandemic international network and fleet plans.

Another factor will be whether the Tata Group wants to keep pace with the ambitious fleet growth plans of its Indian rivals in order to preserve market share – which will be particularly tempting in the domestic LCC market.