World air freight traffic, measured in freight tonne kilometres (FTKs), grew by 2.7% year-on-year in Jun-2018 (the most recent month for which global figures are available). This was slower than the 3.8% recorded for May-2018 and the 4.7% year to date growth rate for the first six months of the year.

The strong upturn in air cargo demand enjoyed in 2017 has eased, but the outlook remains fairly healthy. This year is expected to be only the second time since 2011 when both cargo traffic and cargo yield increase together. Air freight yields are buoyed by rising jet fuel prices, although yield growth is easing and never matches fuel price growth.

There is a gathering cloud on the horizon for air cargo in the guise of increasing rhetoric and action on protectionist trade policies prompted by US President Trump.

IATA's Jun-2018 forecast of the traffic and financial performance of the world's airlines in 2018 predicts a further slowdown to an FTK growth rate of 4.0% for the full year (a forecast reiterated in Aug-2018).

Nevertheless, this is still a healthy rate by comparison with the 10-year average cargo traffic growth rate of 3.0%, based on IATA data for 2008 to 2017. Last year was a bumper year for cargo traffic, with growth of 9.7%, the highest since the 19.9% expansion achieved in 2010, which was itself a bounce back from two years of decline in the global financial crisis. 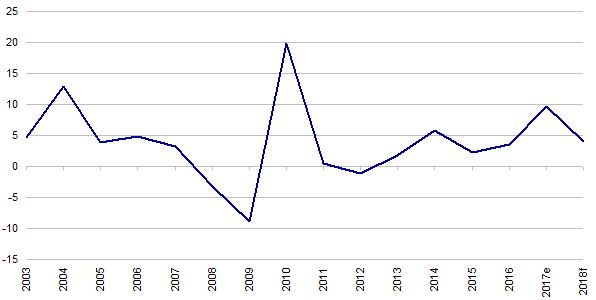 Although air cargo traffic growth is slowing this year, 2018 looks set to be only the second year since 2011 in which both cargo traffic and cargo yield experience positive growth rates.

Cargo yield growth turned positive in 2017, climbing by an impressive 8.1%. Yield growth is slowing this year, but IATA forecasts an increase of 5.1% for 2018 – still a healthy rate. 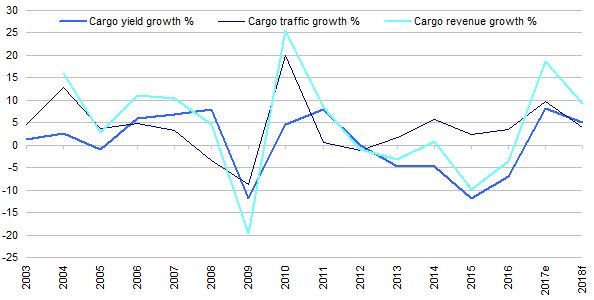 2017 was a rare example of air freight revenue outgrowing passenger revenue. Its 18.7% growth in 2017 compared with passenger revenue growth of 7.2%. Typically, however, cargo revenue underperforms.

From 2010 – which marked the revenue bounceback from the global financial crisis – to 2017, cargo revenue grew by just 8% (according to CAPA calculations from IATA data). Over the same period, passenger revenue grew by 20%, other airline industry revenue leapt by 308%, and total airline revenue increased by 34%.

A major factor in the strong performance of cargo yield in 2017 and 2018 is the increase in fuel prices.

Historically, airlines have increased their prices – both for passenger and cargo – when fuel prices have been rising.

However, although the curve of cargo yield growth moves up and down broadly in synch with that of fuel price growth, yield typically rises and falls at much slower rates.

This demonstrates that cargo price increases, whether through underlying prices or through fuel surcharges, fall well short of matching fuel price increases. On the flip side, when oil prices drop, airlines typically do not lower their prices as quickly as the fall in fuel prices. 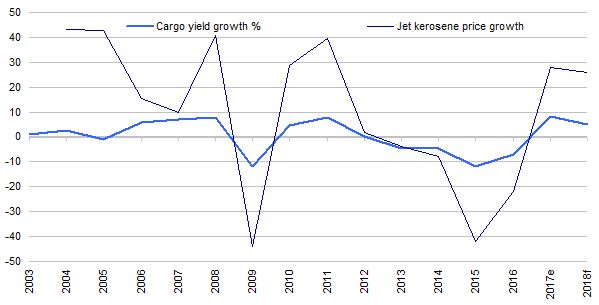 IATA: "the best of the upturn in air freight demand is well behind us"

IATA said in Jul-2018, "the best of the upturn in air freight demand is well behind us", noting that the underlying world trade backdrop was weakening and that the inventory restocking cycle had run its course.

The new export orders component of the manufacturing Purchasing Managers' Index (PMI) is a good leading indicator of air freight traffic. This has fallen to a 21-month low and suggests further slowing of FTK growth ahead. 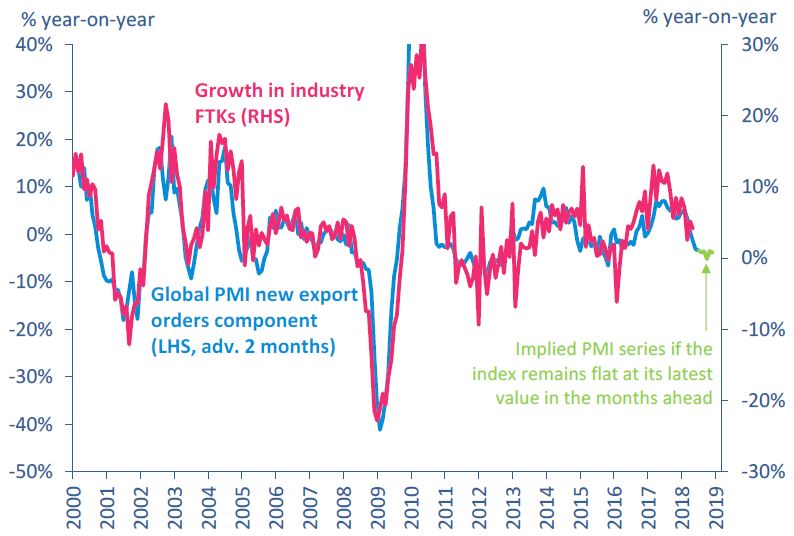 Export orders have been softening in all the major trading nations, indicating a structural slowdown in trade conditions. Other modes of cargo transport, such as container trade, have also been slowing.

However, global economic growth remains healthy, and this is usually a fundamental positive for air freight. Moreover, surveys of both business confidence and consumer confidence are at relatively high levels.

The relative softening of the growth in demand for air freight and other forms of trade, in spite of positive fundamentals, suggests that other factors are applying the brakes.

The end of the restocking cycle, which drove air freight demand in 2017, is an important factor, but IATA flags a global trade war as an important risk in the outlook for aviation (while it does not regard it as a central scenario).

IATA's caution is not without foundation. The protectionist stance adopted by the Trump administration in the US has moved from rhetoric to action.

In addition to these more visible tariff actions, there are frictional barriers to trade that are less headline-worthy, but which also hinder trade flows (whether intentionally or not).

Air freight remains a growth sector, but most of the key indicators look to be past the peak in the current cycle.