It is often said to be an indication that there is an economic recession on the cards once air transport freight volumes go into negative growth territory. That happened in 1Q2019, as ACI World (Airport Council International) has confirmed in its quarterly report, though there are regional discrepancies.

But at the same time, there are particular reasons why the fall in freight volumes might be happening now as trade wars intensify and concerns grow about the potential for a military conflict involving Iran.

A clear definition of future prospects for both freight and passengers is not easy to resolve as oil prices continue to rise.

These figures contrast with continuing growth in the global passenger segment although, at 4.1% year-on-year in 1Q2019, it was below the 12-month rolling average of 5.3%.

It is accepted within the industry that a downturn in freight volume can be a precursor to one in the passenger segment, and such downturns have been known to be indicative of a looming recession. There is a widespread feeling among economists that a (global) recession is on the way – although at times it could be an arcane form of wishful thinking in the editorial offices of those who propagate the theory most frequently, with regard to events in the U.S.

On the other hand: many European countries have witnessed deteriorating economies in the past year, there has been decelerating growth in China and it is being made worse by the ongoing and escalating trade war between the U.S. and that country.

Indeed, that trade war, together with military tensions that have emerged between the U.S. and Iran (and which, along with sanctions on Venezuela, has already impacted on oil prices), was seized upon by ACI as being important factors in the freight downturn.

Looking at the picture region-by-region, Asia Pacific was identified by ACI as being under pressure from "the ongoing trade war" (mainly China-U.S.), resulting in disruptions to a number of the industries' supply chains. Airfreight decreased by 3.3% in Mar-2019 and by 5.5% in 1Q2019. Domestic and international freight recorded "similarly negative figures".

Strangely perhaps, Europe was the only "major regional market" to record growth in Mar-2019, with a modest 0.4% increase. Volumes decreased by 1.5% in 1Q2019, however, driven down by falling international freight.

North America, in line with robust economies and especially so in the U.S., "barely entered a decline", with a 0.1% decrease in Mar-2019. Volumes increased by 0.8% in 1Q2019, despite a 1.8% decrease in international freight.

The passenger segment is faring better; for now

There is quite a different picture in the passenger segment, where there was a 4.1% year-on-year increase in 1Q2019.

Looking again at the regional details:

Asia Pacific: the region, which "has been the largest engine of growth for the industry in recent years", is “showing the effects of global headwinds". Traffic increased by 2% in Mar-2019, "propped up" by 3.4% growth in the international market, compared to 1.3% growth for domestic.

From an air transport perspective, the Middle East is in a bad place right now

While Africa and the Middle East were the only two regions to record freight growth, their passenger segment performance was diverse.

Africa recorded "fairly robust growth" of 7% in Mar-2019, continuing the trend from Feb-2019. In contrast, the Middle East was the only region "without growth" in Mar-2019, with a 0.3% decrease in traffic. ACI World highlighted, "a continuation of ongoing geopolitical trends - the Qatari diplomatic crisis and tensions between major regional players and some Western nations [an oblique reference to Iran] - is having an impact on the region's traffic".

Latin America and the Caribbean recorded "fairly robust growth" of 5.7% in Mar-2019, continuing the trend from Feb-2019. Again, there is a dichotomy here as freight volumes were negative in both cases.

ACI said (overall, that…) "Passenger traffic has remained comparatively resilient but the slight moderation in growth has continued since it emerged in mid-2018".

The China-U.S. trade standoff is the main concern

Whether any of this amounts to much where a possible economic downturn is concerned is open to debate. There are some indicators, but no more than that.

The main issue is undoubtedly the imposition of further tariffs on Chinese goods entering the U.S., how and to what degree the Chinese reciprocate, and the impact of this ‘trade war’ on both countries’ economies. Collectively, they can bring the global economy crashing down.

There is a likelihood that one side will blink and it is more likely to be the Chinese side. That is President Trump’s gamble and his recent trip to Japan might well be tied up with it.

The Iranian issue is harder to call. No one wants international conflicts in that region of the world, and for that reason alone there will probably - hopefully - not be one.

But the standoff has already impacted oil prices, with Brent Crude hovering around USD70/barrel. Iran is the world’s seventh largest producer. There are many varying 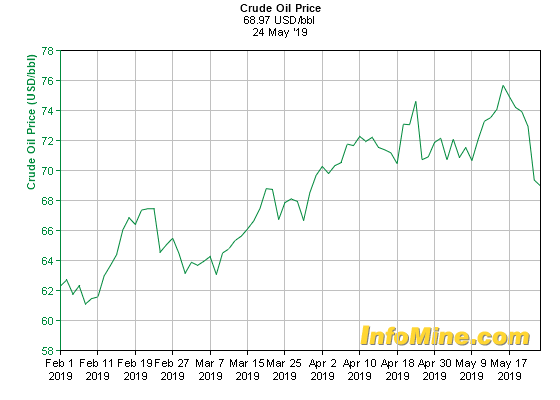 Once these rises work their way into the aviation system in the form of fare hikes and surcharges, and even if the U.S.-China trade war dampens fuel consumption (which is a contributory factor to the rises now), both passengers and freight can be severely impacted. ACI's 2Q2019 result will either confirm the trend or stabilise.