European airline shares fell with wider markets on Wednesday (15-Sep-2010) following disappointing US data on industrial output and Japan commencing an intervention to weaken the yen. An increase in oil prices (+1.0%), to USD76.02, also weakened the airline share market.

Air France-KLM (-0.8%) slipped. Air France stated during trading that with China Airlines joining SkyTeam Alliance, it would increase its presence in the Asian market. Air France and KLM serve seven destinations from Paris and/or Amsterdam with 84 weekly services increasing to 109 weekly services including those operated on a codeshare basis with China Eastern and China Southern. Beijing, Shanghai and Hong Kong are served by both airlines, Guangzhou by Air France only and Chengdu, Taipei, Hangzhou by KLM.

Finnair not planning Bangalore or Chennai services in short term

Finnair (-1.6%) was also down for the session. CEO Mika Vehvilainen stated the carrier has no immediate plans to start operations to Bangalore or Chennai, however flying to the destinations is part of its expansion plans. No plans were announced to resume services to Mumbai in the near-term. Under the present bilateral air services agreement between India and Finland, Finnair can operate daily services to three Indian cities. The carrier will commence daily Helsinki-New Delhi from Jan-2011, up from the six flights a week it currently operates.

Jet2.com to open Glasgow base

Dart Group (+2.8%) was also up after its LCC, Jet2.com, announced plans to establish its eighth base at Glasgow Airport, bringing substantial investment to the region including 150 new jobs and nine destinations. 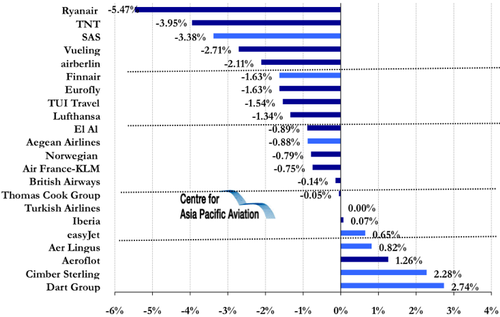