However, the majority of European carriers were down, pushed lower by an improvement in oil prices (+2.7%), to USD71.19.

Air France (-1.6%) fell after reporting that unit revenue per available seat kilometre (RASK) remained below last year’s level in Jan-2010, despite an improvement in the long-haul segment.

The carrier reported a 1.4 ppt year-on-year improvement in load factor for the month, to 78%, boosted by a 3.5 ppt increase in trans-Atlantic load factor, to 83.8%. Europe (+1.8 ppt), Asia Pacific (+1.0 ppt) and Africa/Middle East (+0.2 ppt) loads also improved slightly, while Caribbean/Indian Ocean load factor was down 3.0 ppts for the period. The overall increase in load factor was the result of a larger reduction in capacity (ASKs) than fall in traffic (RPKs), down 3.4% and 1.6%, respectively.

Air France-KLM stated activity levels were affected by the adverse weather conditions, as well as two days of strikes by French air traffic controllers. Year-on-year changes benefit from a favourable comparison base, with the exception of the Americas and Africa and Middle East networks which recorded rises in both traffic and capacity in Jan-2009.

Meanwhile, Air France KLM’s cargo performance for Jan-2010 was a different story, with the carrier stating revenue per available ton kilometre (RATK) continued to improve during the month, recording a slight rise year-on-year. Cargo traffic (FTKs) were up 2.0% year-on-year, as capacity (ATKs) was reduced 11.4%, resulting in a 8.5% improvement in freight load factor, to 64.3%.

IATA stated during trading that European carriers, such as Air France-KLM and British Airways, are likely to lag behind Asian carriers in raising fares, with the majority of European carriers expecting no improvement in yields this year. See related article: Airlines see improved yields ahead, but risks remain – IATA survey

British Airways’ (-3.4%) shares also took a hit, after Standard & Poor’s lowered its rating of the carrier’s long-term corporate credit rating from ‘BB’ to ‘BB-‘, with a negative outlook. The analysts cited the possibility of strike action from its cabin crew, the carrier’s earnings outlook and “uncertainty” surrounding its pension deficit. The reduction is the ratings third in less than 12 months.

European Regions Airline Association (ERA) reported Aegean was the largest regional airline in Europe in Sep-2009, with a 12.8% year-on-year increase in passenger numbers for the month, to 580,300. 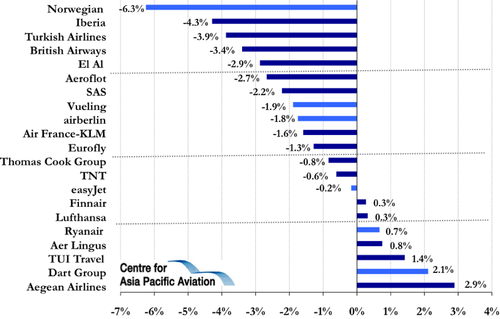