Air France-KLM makes progress in 2015, but still has more to do. Labour productivity is at the heart

Air France-KLM's 2015 was a big improvement on its strike-hit 2014, but it highlighted the progress that it still needs to make. It returned to net profit for the first time in six financial years and achieved its best operating margin since before the global financial crisis, although this was below its previous peak.

In the passenger network business, long haul profits soared and medium haul losses narrowed. LCC brand Transavia made another loss, but laid plans for its first base outside the Netherlands and France, to be established in Munich in Mar-2016. In the cargo segment, losses deteriorated in spite of capacity cuts, especially in its full freighter operation.

Air France-KLM generated a return on capital employed of 8.6% in 2015, a leap from 1.7% in 2014, but short of its 2017 target range of 9% to 11%. As the world airline industry already approaches levels of profitability higher than previous cyclical highs, Air France-KLM will need continued assistance from the global cycle. It will also need a new agreement on labour productivity, particularly with Air France flight crew.

Although the 2015 returns to profit and to revenue growth are welcome, Air France-KLM's 3.1% operating margin does not compare well with CAPA's estimated average global airline operating margin of 7.2% in 2015 (a new high for the world's airline industry).

Moreover, although it is the first of the big three European legacy airline groups to report for 2015, it is likely to be the lowest margin among the three. 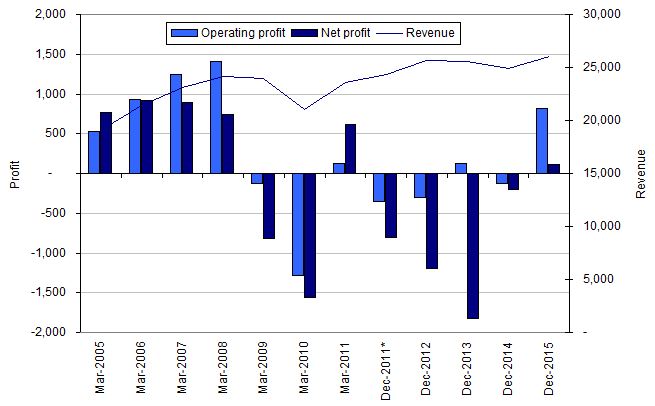 In spite of very weak profitability in recent years, Air France-KLM management has made a good job of managing liquidity and the balance sheet. At the end of 2015, its net debt fell by EUR1.1 billion, or 20% year-on-year, to EUR4.3 billion. With the exception of the strike-affected 2014 it has successfully lowered net debt every year, from its 2011 peak of EUR6.5 billion.

This reduction in net debt has been achieved by ensuring that annual capital investment is kept below the level of operating cash flow generated. In 2015, its capex was EUR1.6 billion, which was more than the EUR1.2 billion spent in 2014, but less than the EUR2.0 billion of operating cash flow. The group plans to increase capex to EUR1.6 billion-EUR2.0 billion in 2016 and EUR1.7 billion-EUR2.2 billion in 2017, which seems reasonable given the improving profit trend.

It is committed to a further "significant reduction" in net debt in 2016. 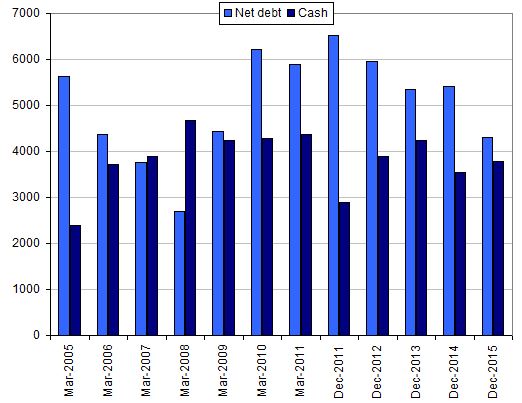 Note that the name of this segment has been changed to 'passenger network' from the shorter 'passenger' in order to highlight that it includes only the network airlines Air France, KLM and Hop, and not the point-to-point airline Transavia.

Since the formation of Air France-KLM in 2004, the group has only once made a positive annual operating result in a year when the passenger network business has made a loss (this was the year to Mar-2011). The group's profitability very much depends on that of its biggest segment. 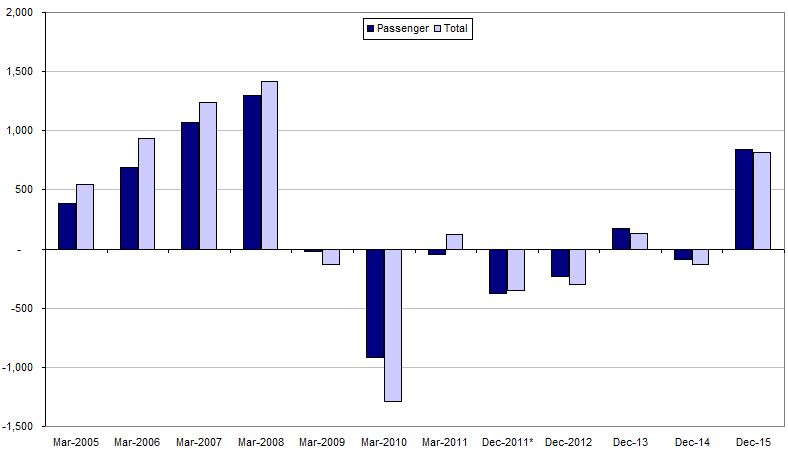 All three principal sub-networks within the passenger network segment improved their operating results in 2014. Although official audited sub-segment results are not reported, Air France-KLM has released its estimates of the operating result in each area for a couple of years now.

According to these estimates, the long haul network made more than the whole business, achieving an operating result of EUR1,140 million in 2015, up from EUR740 million in 2014 (the 2014 figure is before the impact of the pilot strikes). Long haul ASKs were up 1.4%.

The medium haul networks continued to make losses, in spite of a 2.3% ASK cut, but managed to narrow the extent of red ink. Medium haul hub feed, which is closely tied to the long haul network, reduced its loss from EUR320 million in 2014 to EUR230 million in 2015, with ASKs almost unchanged (+0.4%).

Medium haul point-to-point cut its loss from EUR120 million to EUR70 million, and its ASKs by 11.5%. Note that these 2014 operating result figures and the ASK growth rates exclude the strike impact.

The passenger network's total ASKs increased by 2.3% in 2015. Without the effect of capacity lost to strikes in 2014, the underlying growth rate was just 0.7%. Air France-KLM has maintained tight capacity discipline for a number of years: its ASKs in 2015 were only 6% above their level in the year to Mar-2009, since when its average growth rate has been less than 1% pa. 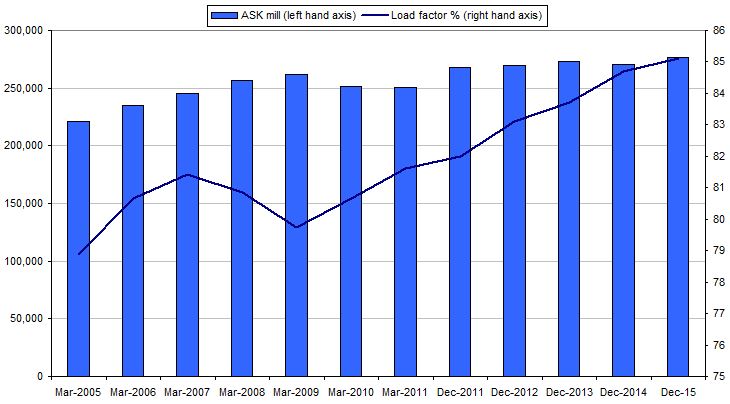 A "high degree of volatility" in unit revenue

Passenger unit revenue increased by 2.8% in 2015 as reported, but it fell by 3.3% excluding the impact of currency movements and the previous year's strike from the figures. This 'like for like' RASK performance was down at a similar rate, -3.2%, in 4Q2015, but a significant cause of the weakness in the final quarter was the Paris terrorist attacks in Nov-2015.

On a conference call to discuss the 2015 results, Air France-KLM management told analysts that the underlying 4Q trend was a little better (-0.7%), and that the Paris impact was now receding.

However, CFO Pierre-Francois Riolacci stressed that there was a "high degree of volatility" in unit revenue from month to month, and that the group was cautious about the outlook for this indicator.

He added that European market capacity growth would be around 7% on long haul and 6% on medium haul in summer 2016. There were no "worrisome features" in Jan-2016, but he expected Feb-2016 and Mar-2016 to be "a bit weaker", albeit without the "bloodshed" anticipated by "a large low cost carrier".

Although the passenger network segment remains critical to the group's results, there is a wide range of profitability among the other segments.

The cargo segment continues to weigh on the group's profit and its operating loss worsened from EUR212 million in 2014 to EUR245 million in 2015. Air France-KLM blamed structural air cargo industry overcapacity. Cargo unit revenue fell by 5.6% as reported and by 12.8% excluding the favourable impact of currency movements, in spite of a 4.5% cut in cargo capacity (ATKs).

Operating losses from its full freighter operations narrowed from EUR97 million in 2014 to EUR42 million in 2015. It targets breakeven in this area in 2017.

The maintenance segment increased its operating profit from EUR174 million in 2014 to EUR214 million in 2015, with revenue up 18.3% to EUR4,012 million and a generated operating margin of 5.3.% versus 5.1% in 2014. It consistently maintains better margins than the group as whole.

The 'other' segment consists mainly of a catering unit, whose operating result more than doubled from EUR18 million to EUR37 million, with revenue up 8.7% to EUR947 million.

LCC subsidiary Transavia, which comprises Transavia Netherlands and Transavia France, made another operating loss in 2015 (loss of EUR35 million versus EUR36 million loss in 2014) in spite of revenue growth of 4.1% and a 1.8% reduction in unit cost. Unit revenue fell by 1.6%.

The LCC increased its ASKs by 5.3% (focused on France, where capacity was up 24.6%) and its load factor gained 0.1ppts to 89.9%. Passenger numbers grew by 9.0% to 10.8 million. Air France-KLM said that its operating result was in line with its plan and that it remains on course to break even in 2017.

Transavia will grow ASKs at the faster rate of 15% in 2016, with Transavia France growing by 20%. Air France CEO Frédéric Gagey told analysts on the 2015 results conference call that the process of transferring slots from Air France to Transavia at Paris Orly, in order to serve leisure destinations, was now complete. The next phase was to grow its routes from provincial French cities, in addition to expanding the business into new European destinations.

Under the Netherlands arm of Transavia, the LCC brand will open a Munich base in Mar-2015. Management expects the Munich base to have a lower cost base than existing Transavia operations in France and the Netherlands, in spite of Munich's relatively high airport charges. This is  thanks to a new contract for flight crew (in particular, pilots), the outsourcing of ground operations and a lack of additional overhead. Munich is expected to be a relatively high-yield market. Further development of Transavia across Europe will require pilot agreement

Air France-KLM's 2015 results presentation indicates that Transavia's fleet will grow to more than 65 aircraft in 2017, which is still smaller than the LCC fleets of its rival European legacy groups Lufthansa (with Eurowings) and IAG (with Vueling). Moreover, all three of these legacy-owned LCCs will be much smaller than the leading independent European LCCs.

Air France-KLM CEO Alexandre de Juniac told analysts that a plan for Air France-KLM to integrate the management and ownership of the two halves of Transavia into a single holding company was "probably mid term". It would offer advantages in terms of efficiency and strategic focus and would be a simpler tool with which to participate in what Mr de Juniac called the "LCC consolidation that will naturally happen in Europe".

The merits of integrating Transavia under one structure are such that Air France-KLM would be better off making this a short-term plan. However, the development of the LCC remains a highly political subject, particularly in France, and the first priority for Transavia-related pilot negotiations is to agree its further expansion into European markets outside France and the Netherlands.

Both major groups within the Air France-KLM group enjoyed an improvement in both revenue and operating profit in 2015.

KLM's operating margin of 3.9% again beat that of its larger sister company Air France, whose margin was 2.8%. Nevertheless, 2015 was significant for Air France in that it was its first year of positive operating profit since the year to Mar-2008. 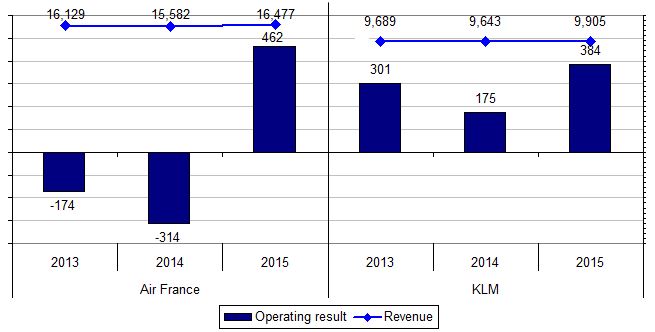 In 2016 the Air France-KLM group plans ASK growth across all of its passenger airlines in the range of 1.0% to 1.4%, maintaining its tight capacity discipline (it has typically remained in a range of 1% to 2% in recent years). Air France will reduce capacity by 2%, KLM will grow by 3% and Transavia will accelerate to ASK growth of 15%.

Air France-KLM estimates that it retained only 30% of the benefit of lower fuel prices in 2015, the balance being offset by the weaker EUR versus USD and, more particularly, by unit revenue weakness. It expects that similar factors will again offset a significant part of its fuel savings in 2016.

Nevertheless it expects improved free cash flow, and this implies improved profit levels in 2016 (although it has not set a profit target).

2017 and beyond: much depends on labour productivity

For 2017, the group's capacity plan will depend on the outcome of employee negotiations over labour productivity improvements, particularly at Air France. In Oct-2015 the French airline decided to cut its long haul ASKs by 10% from 2015 to 2017 (with the larger part of the cut deferred to 2017), after failing to reach a new agreement with flight crew unions.

Mr de Juniac told analysts that Air France could return to growth on long haul in 2017 if a satisfactory productivity agreement could be reached with labour representatives. The group CEO also said that Air France-KLM was watching the development of the long haul low cost model very closely and considering whether it was possible for the group to do something in this segment.

However, he stressed that his "first duty" was to solve the "problems in the mainline" and a long haul low cost business would not achieve this.

It is significant that Air France-KLM's future growth is linked to labour productivity. In 2015, it achieved virtually stable overall capacity (total ATKs +0.1%) with 1.5% fewer employees. Labour productivity in ATK per employee increased by 1.5%. However, labour costs grew by 2.8% (inflated by non-cash pension related costs), so that employee costs per ATK were up by 2.8%. Fortunately, revenue per employee grew by 6.2%.

So, in 2015, some labour productivity indicators improved and some deteriorated. Nevertheless, in absolute terms, Air France in particular remains a laggard on labour productivity, compared with other European legacy airlines, and needs to improve significantly.

Air France-KLM is right to put labour productivity improvement at the heart of its plans.