The loss, the group’s second-weakest fiscal first quarter performance since becoming a combined entity in 2004, reflected a sharp rise in fuel prices and ongoing disruption from crises in Japan, but more significantly for Air France-KLM, in the Middle East and North Africa. The group’s revenue has returned to levels seen in 1Q2009 but soaring expenses pushed it deep into the red, with the airline reporting an operating loss of EUR145 million, widely missing analyst estimates of a EUR43 million operating profit.

Air France-KLM reported total revenue of EUR6.22 billion in the quarter, an 8.7% year-on-year increase. The revenue increase returns Air France-KLM to its previous highs of 1Q2009, prior to the deterioration in the pricing environment in 2009 and into 2010. Top line revenue did not increase in line with growth in passenger traffic (RPKs), which were up 9.4%. Adding to pricing pressure, ASKs increased 10.1% in the quarter, which brought down load factors 0.5ppt to 81.1%. 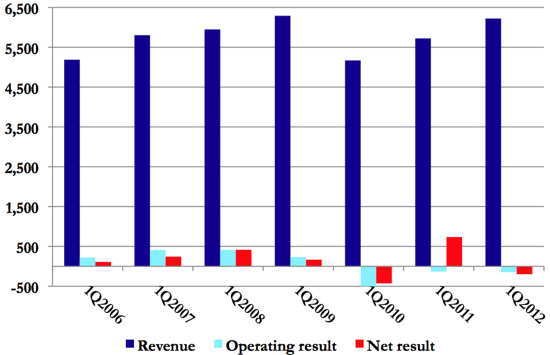 Air France reported its strongest quarter of passenger traffic (numbers) growth in over two years, although the absolute figure is affected by the Apr-2010 ash cloud crisis that closed European skies for a week. In May and Apr-2011, however, traffic trended strongly, increasing 6.1% and 4.0% respectively. 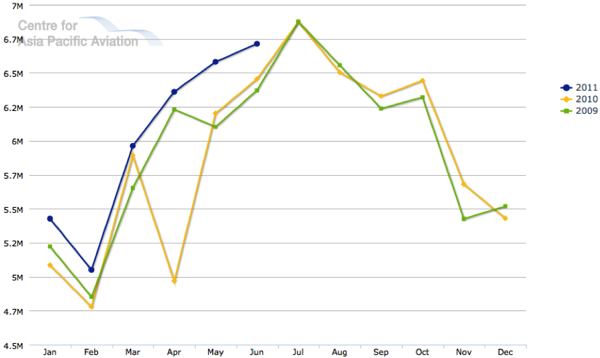 KLM has also recorded strong growth in the period, although Jun-2011 traffic data is not yet available. 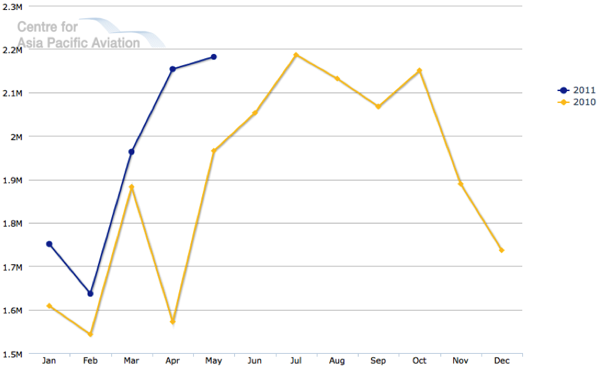 Group yields (revenue per RPK) increased 0.6% to EUR 8.5 cents, however unit revenue per ASK fell slightly to 0.1% to EUR6.89 following the group’s aggressive capacity expansion. As expected, and in line with reports from other airlines, cost blowouts were central theme behind the result.

Air France-KLM’s operating costs increased 8.7% - the same rate as revenue  - to EUR6.37 billion in the quarter, effectively neutralising all revenue gains and leaving the group in the red at the operating level for the third consecutive 1Q.

Fuel costs increased 16% on an absolute basis to EUR1.67 billion. This increase followed a 7% increase in passenger volume, a favourable currency effect of 8% and a rise in fuel prices post-hedging of 19%. Employee costs, the group’s second-largest cost item, increased 3.5% to EUR1.93 billion, of which a third is linked to the payment of an exceptional bonus. Ex-fuel operating costs increased 6.2%. Unrest in North Africa and the Middle East and the aftermath of the Japanese earthquake, tsunami and nuclear crisis in Mar-2011 all combined to cause EUR100 million in losses, Air France said. Unit costs per ASK fell 0.3% to EUR 7.04 cents, below the cost EUR6.89 cents recovered per ASK. Unit costs, on an equivalents ASK basis, was stable year-on-year and fell 3.0% at constant fuel prices, following the latest round of cost reductions. Air France-KLM’s “Challenge 12” programme, its ongoing cost reduction project, has been increased to EUR500 million from EUR470 million.

Air France-KLM has added the European debt crisis to its list of factors negatively affecting business travel and the movement of goods. "The operating environment remains uncertain due to the situation in Japan, Africa and the Middle East and the euro zone crisis," the group said. "Moreover, fuel prices are still at high levels and the euro remains volatile."

As a result, Air France-KLM has taken a knife to its long-haul capacity growth plans, halving long-haul growth in winter to 2.7% from 5.1%, a measure which should be yield supportive and shore up its goal of delivering an operating profit in FY2012.