Air France-KLM: it may be unfair to compare its 1Q2013 with Lufthansa's, but…

Two of the European Big Three reported 1Q2013 results within two days, so we can’t resist a comparison. Air France-KLM’s quarterly operating loss of EUR530 million was EUR171 million below Lufthansa’s. Air France-KLM shaved net debt from EUR6.0 billion at the end of 2012 to EUR5.9 billion; Lufthansa’s net debt is less than one third of this. AF-KLM’s 1Q RASK grew by 1.2%; Lufthansa’s by 2.8%.

Air France-KLM makes losses in Europe, where Lufthansa now claims a profit. In an attempt to fix this, Air France-KLM has Transavia for some leisure routes, Hop for French regional point-to-point and some hub feed, Air France’s provincial bases strategy (under review) for non-hub French routes and both Air France and KLM for everything else. Lufthansa has Germanwings for non-hub routes and Lufthansa for hub feed in Germany.

For FY2013, Air France-KLM isn’t saying whether it can improve on 2012’s EUR300 million operating loss, only that it aims to cut unit costs (ex fuel and currency) and net debt, whereas Lufthansa aims to beat last year’s EUR524 million profit.

Air France-KLM reported on 3-May-2013 a narrowing of its 1Q2013 operating loss by EUR81 million to EUR530 million from EUR611 million last year (re-stated to reflect pension accounting changes). The net loss was EUR630 million, which is EUR251 million worse than 1Q2012, when the group benefited by EUR98 million from the sale of Amadeus shares and had a EUR225 million better result from ‘other financial income and expense’ (mainly non-cash changes in the fair value of financial assets and foreign exchange gains).

The improved operating result gives a truer reflection of underlying performance. Revenues grew by 1.3% to EUR5.721 billion, in spite of stable capacity (ASK +0.2%). 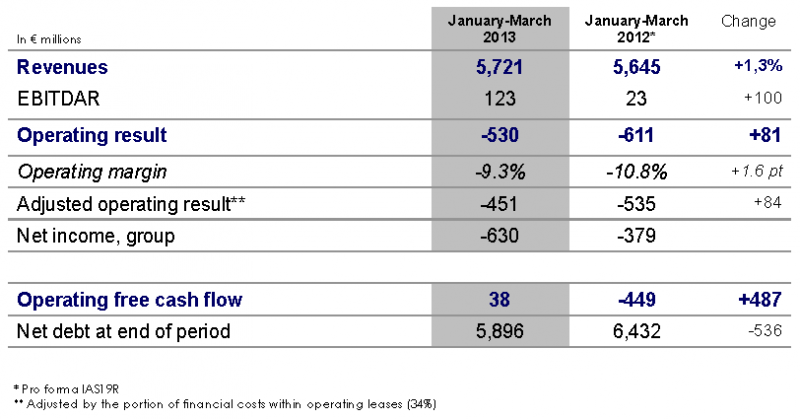 The group benefited from a freeze in general pay rises at both Air France and KLM and a voluntary departure plan at Air France, although this was partly offset by non-cash pension cost increases. Fuel costs (27% of the total) were stable as price increases were offset by volume declines.

Passenger business made most of the loss

The passenger airline remains the most significant segment for the group, with 78% of revenues in the quarter. It also remains the worst performer, accounting for EUR447 million out of the group operating loss of EUR530 million.

It did at least narrow its operating loss, as did the cargo segment. The maintenance segment grew its operating profit, while the catering & other segment was the only one to see a deterioration in its operating result (its loss widened). 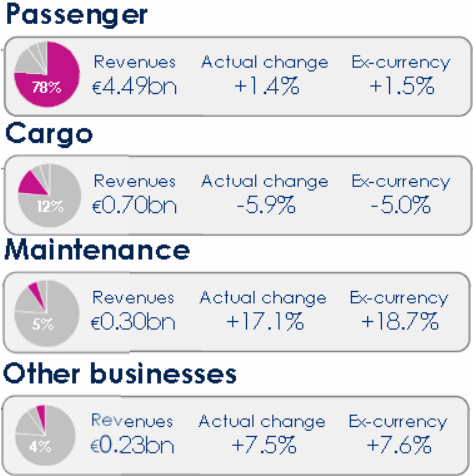 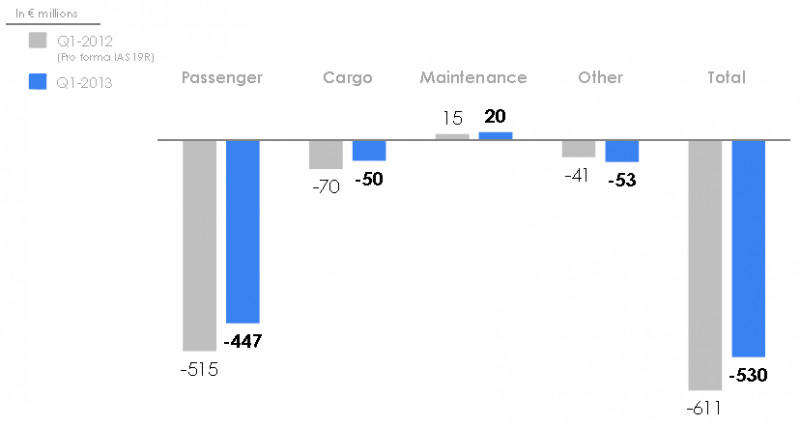 Passenger revenues were up 1.4% to EUR4.49 billion. Unit costs were contained (-0.4% as reported and -1.0% excluding fuel and currency movements). The operating loss of the passenger business narrowed to EUR447 million, from EUR515 million a year earlier.

In the domestic French market, RASK fell by 2.3% in spite of capacity being very modestly down (-0.2%), reflecting the weakness of demand. The company continues to review its French provincial bases strategy and will draw its conclusions on this by Sep-2013. 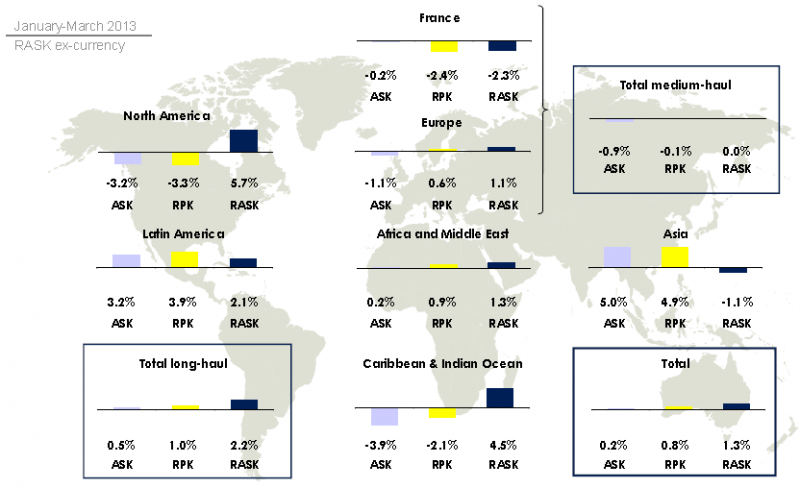 The long-haul RASK increase can be further analysed by cabin. As Easter fell in the first quarter this year (but was in April last year), the long-haul Economy cabin enjoyed growth in ex currency RASK of 4.2%, while this was 1.4% for the Premium cabins.

By region, the strongest RASK increases were in North America, the Caribbean and Indian Ocean, where capacity cuts were also the deepest. The only regions to see a fall in RASK were France and Asia.

Asia saw ex currency RASK fall by 1.1%, reflecting downward pricing pressure also reported by Lufthansa in the quarter. Nevertheless, given a 5.0% increase in capacity, this performance was perhaps reasonable in the current market.

The group’s position in Asia should benefit from its developing partnership with Etihad and this is, perhaps, one area where it has an advantage over Lufthansa. On 2-May-2013, the two announced new codeshare destinations in Africa, Asia, Australia and Europe for this summer.

Air France is adding its AF code on Etihad’s daily flights from Abu Dhabi to the Sudanese capital, Khartoum, and to Melbourne and Sydney. Air France expects to place its code shortly on Etihad services between Singapore and Brisbane (Australia) and, subject to regulatory approvals, on routes between Abu Dhabi and Kathmandu (Nepal). The AF code is already on Etihad flights between Paris CDG and Abu Dhabi, and onwards to Colombo (Sri Lanka), Mahé (Seychelles) and Male (Maldives).

Cargo capacity (ATK) was cut by 4.1%, with belly and combi capacity down 1.7% and freighter capacity down 9.3%. Air France-KLM says that the business “continued to be affected by the economic slowdown and the situation of overcapacity in the industry”.

Cargo revenues fell by EUR44 million, or 5.9%, to EUR700 million, but the operating loss was reduced by EUR20 million to EUR50 million as unit costs fell by 4.0% as reported and by 5.1% excluding fuel and currency movements.

Transavia losses widen, but 'on track to achieve a positive operating result for FY2013'

The other businesses comprise mainly the leisure airline activities of Transavia and the catering business of Servair. In 1Q2013, this segment generated revenues of EUR229 million, up 7.5%, and an operating loss of EUR53 million, EUR12 million worse than last year.

Transavia is two airlines, one based at Amsterdam Schiphol and the other at Paris Orly, operating under the same brand, using the same website and with a similar low-cost, leisure business model. The French operation is growing more rapidly as it takes over some Air France leisure routes that are better suited to its lower cost base.

The Transavia France fleet grew to 10 aircraft after gaining two Boeing 737-800s in the quarter, while Air France’s medium-haul fleet was reduced by three A320 aircraft to a total of 141 aircraft. The Transavia fleet in the Netherlands was stable at 31 aircraft, but flight hours grew through better utilisation, and KLM’s medium-haul fleet shrank by two 737-400s to 47 aircraft.

Transavia’s unit revenues (RASK) were stable (+0.4%), in spite of the rapid growth in capacity, as were unit costs (CASK -0.5%). Despite the strong revenue growth, Transavia’s operating loss widened by EUR6 million to a loss of EUR51 million, but Air France-KLM says it is on track to achieve a positive operating result for 2013.

Air France-KLM has published CASK data for Transavia for the first time. Its 1Q2013 CASK of EUR5.76 cents is just below that of easyJet and Vueling, but significantly higher than that of Ryanair. However, a meaningful comparison of CASK requires data on average sector lengths.

If Transavia has similar average sector lengths to easyJet and Vueling (around the 1,000km to 1,100km mark), then its cost base looks very competitive. Since CASK generally decreases with increasing sector length, CASK would need to be significantly lower than that of Vueling and easyJet in order to be categorised alongside them as low-cost if its average sector length is appreciably longer than theirs.

Sector length data have not been published for Transavia, but the carrier’s route map suggests that the average sector length is longer than that of Europe’s other main LCCs and could be around 2,000km or more. If this is the case, then Transavia’s unit costs are certainly competitive compared with its parent Air France-KLM and other legacy carriers, but leave scope for further reduction if it is to justify fully its low-cost tag.

Priorities for 2013: capacity, capex and cost

The group plans capacity (ASK) growth of 1.5% for 2013, with long-haul +2.4% and medium-haul -2.1%. The medium-haul network capacity reduction will be driven by a 6.1% cut in point-to-point capacity and almost stable hub capacity (-0.4%). Within the hub category, Amsterdam will see some growth, while Paris CDG will see capacity cuts.

Capital expenditure is planned to be EUR1.2 billion in 2013, lower than in any year since the merger of Air France and KLM in 2004. This is part of the group’s aim to lower net debt from EUR6.5 billion at the end of 2011 to EUR4.5 billion by the end of 2014 (it was EUR5.9 billion at 31-Mar-2013). Mr Calavia said that the major part of the further reduction in net debt would take place in 2014, but that there would be further progress this year. Following the group’s receipt of EUR547 million from a convertible bond issue in Mar-2013, liquidity stood at EUR4.3 billion at the end of the quarter, up from EUR3.9 billion at end 2012.

On costs, the group aims to lower its unit costs on a constant currency and fuel price basis in 2013, but it has not quantified the magnitude of the reduction that it targets. On the conference call, Mr Calavia said “it might be in the range of 1 or 1.5%, maybe more, maybe less”. 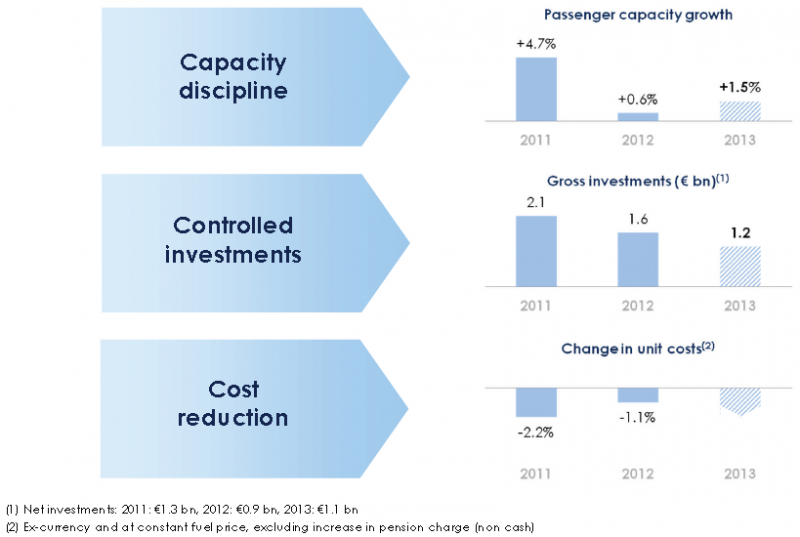 Following Lufthansa’s 1Q2013 results, CAPA said that reaching its ambitious 2015 targets would be the airline management equivalent of the juggler, who already has balls in the air, adding knives and flaming torches to the spectacle. Air France-KLM successfully completing its Transform 2015 cost and debt reduction programme will be like the same juggler starting from a position lying flat on his back.