And, once again Aegean Airlines (+4.4%) continued its climb towards the stars.

Iberia (-2.1%) lost ground too, while deciding to go public again over its manoeuvring with would-be merger partner, British Airways. 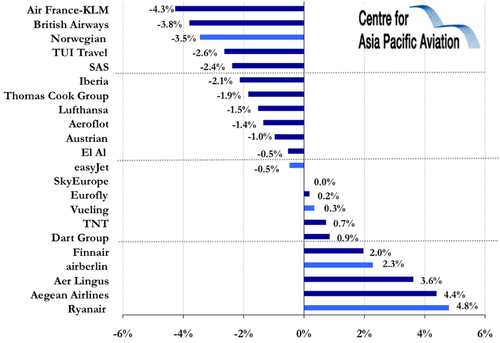 The three way merger/operational merger involving British Airways and Iberia, along with American Airlines across the Atlantic, continues to look shaky, as Iberia officials yesterday extended their public negotiating regime.

By suggesting that Iberia would also fit well with SkyTeam or Star - and that analysis was continuing of the respective merits of these - Iberia has made the increasingly fragile British Airways relationship looks even further away.

Air France has long had a close relationship with its latin neighbours and operating links remain in place. A Star link is less likely, but simply the clear message to BA that "we have options" is most unwelcome.

BA's pension fund liabilities are the hook which Iberia is using to leverage a stronger position in any merger.

Iberia's recent performance in the market has not been outstanding, but neither has it been catastrophic. Last month, the carrier reported reasonable figures for April traffic. RPKs climbed 2.6% over the previous year, load factor improved 4.2 ppts, to 82.7%, an April record level for the company. ASKs fell by 2.7%, and the average stage length increased by 6.6%, as international traffic dominated a shrinking European and domestic network.

Although Iberia has signalled a loss for this year, as it gradually gets its own house in order, so the options improve. But it is still suffering and yesterday prefaced possible further European capacity cuts this Summer. Chairman, Fernando Conte, said yesterday, "I don't see demand as bad for the Summer, what's happening is the quality of revenue is quite frankly, poor".

"One reason is the fall in business traffic and the other is everyone is fighting for a smaller number of customers, so fares are falling," Conte said.