Air France-KLM made further progress with its Transform 2015 restructuring programme in 1Q2014 and saw its losses narrow. However, while unit costs fell, unit revenue weakness is a concern and LCC subsidiary Transavia's losses widened. In addition, cargo continues to provide headaches for management and a further restructuring, focusing on the use of freighter aircraft, has been announced.

The first quarter is typically weak for European airlines and underlying trends were blurred by the shift in the timing of Easter, so these results may not tell us much about the group's full year prospects. Air France-KLM is sticking to its financial targets for now.

However, Venezuela's recent currency devaluation, and Air France-KLM's consequent network adjustments, are a reminder that the airline industry is often subject to unexpected developments. Unless there is some contingency in the targets, there is a sense of anxiety that the next change in them will be to lower them.

In 1Q2014, Air France-KLM's net result improved by EUR33 million versus the same quarter last year, from a loss of EUR641 million to a loss of EUR608 million. This result includes the negative impact of EUR117 million of foreign exchange losses, in particular related to cash held in Venezuela following the devaluation of Venezuela's currency.

The operating result improved by EUR87 million, from a loss of EUR532 million to a loss of EUR445 million, but this was lower than the consensus analyst forecast loss of EUR410 million (median of 15 analysts' forecasts, source: Air France-KLM investor relations website).

Revenues fell by 2.2% year on year to EUR5.55 billion (compared with a consensus forecast of EUR5.74 billion), although they were flat year on year on a constant currency and scope basis. Currency movements depressed revenues by EUR108 million, but also lowered operating costs by EUR93 million, so the net impact was to reduce the operating result by EUR15 million.

(1) 2013 restated for IFRIC 21, CityJet reclassified as discontinued operation (2) See definition in press release (3) Like for Like: at constant currency and scope (4) Net debt at 31-Dec-2013
Source: Air France-KLM

All segments enjoyed an improved operating result, but only Maintenance makes a profit

The fall in group revenues of 2.2% mainly reflected the 1.9% fall in the revenues of the passenger business, which accounted for 79% of the total and came in spite of capacity growth. The cargo business underwent a bigger fall in revenues, -3.4%, reflecting ongoing demand weakness. Maintenance revenues fell by 4.0%, but the segment's operating result improved by EUR2 million to EUR22 million. Losses in the 'other' segment mainly reflected the result of LCC subsidiary Transavia. 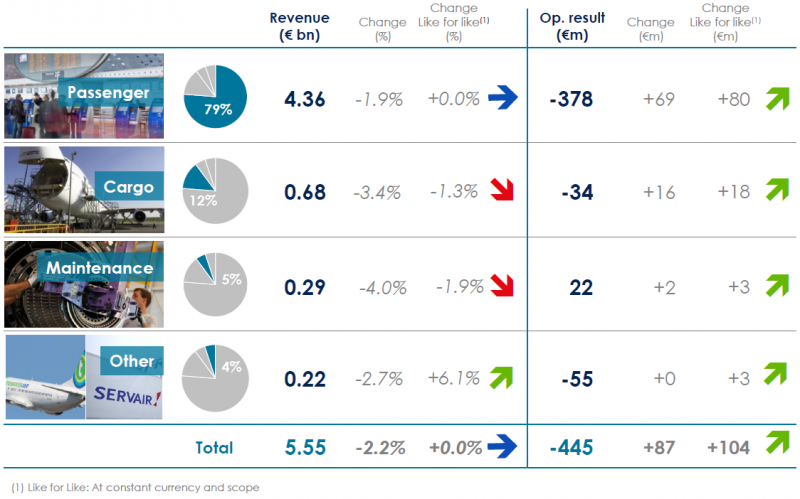 In the passenger segment, available seat kilometres (ASK) increased by 1.3% in 1Q2014, with revenue passenger kilometres (RPK) up 2.1% and load factor up 0.6 ppts to 82.8%. Unit revenues (RASK) fell by 2.7%, although this was substantially due to currency movements. On a like-for-like basis (adjusting for currency and a change in revenue allocation, whereby EUR7 million was transferred from "other passenger" to "scheduled passenger" revenues), RASK was down only 0.7%. 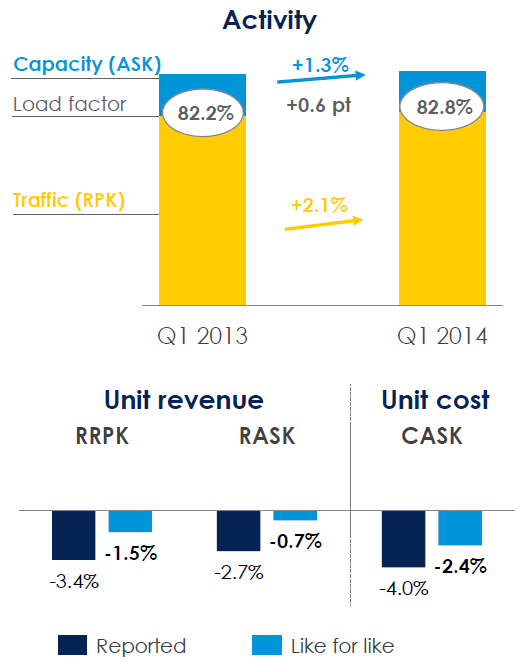 The underlying (like-for-like) RASK decline of 0.7% across the group's passenger network had some significant regional variations. The long-haul network experienced a fall of 0.4%, while medium-haul saw an increase of 0.6%. Long-haul premium unit revenue was strong, up 2.5% on a like-for-like basis, while long-haul economy cabins declined 1.4%.

The biggest like-for-like drop in RASK was on the Latin American network, where it fell by 4.2%. To a large extent, this was the result of the big capacity increase in the region (ASK +10.3%) as Air France-KLM adds new destinations and capacity to existing destinations. Although the group will continue to grow its overall Latin American capacity, it is reducing capacity to Caracas following the Venezuelan currency devaluation and the restrictions imposed on foreign companies in repatriating their cash.

Group CFO Pierre-Francois Riolacci told analysts on a conference call to discuss the results that the new partnership with GOL, expected to close in Jun-2014, should improve the group's position in Latin America. He also said that Air France-KLM needed to be careful about competitor capacity and that Iberia's restructuring and improved cost base meant that the group could not afford to let up in its own restructuring.

On North America, like-for-like RASK fell 0.7%, the same figure as for the whole network, with ASK growth of 1.4% also close to the group's global increase of 1.3%. Mr Riolacci said that competitor capacity growth was placing some pressure on pricing, but the Atlantic joint venture with Delta was profitable and he expected its profit to increase.

In Asia, where FY2013 saw RASK weakness partly as a result of yen weakness, capacity was cut in 1Q2014 (ASK -1.3%) and like-for-like RASK grew by 1.1%. Mr Riolacci said that Japan was a "strong market even if route profitability had been hurt by foreign exchange".

The group's medium-haul network saw like-for-like RASK growth of 0.6%, with ASKs down by 2.2%. This part of the business is the focus of significant restructuring, particularly on point to point routes, where ASKs were cut by 15.4% (the FY2014 cut will be less, but still at a double digit rate, according to Mr Riolacci). The medium-haul hub business saw an increase in RASK and capacity. 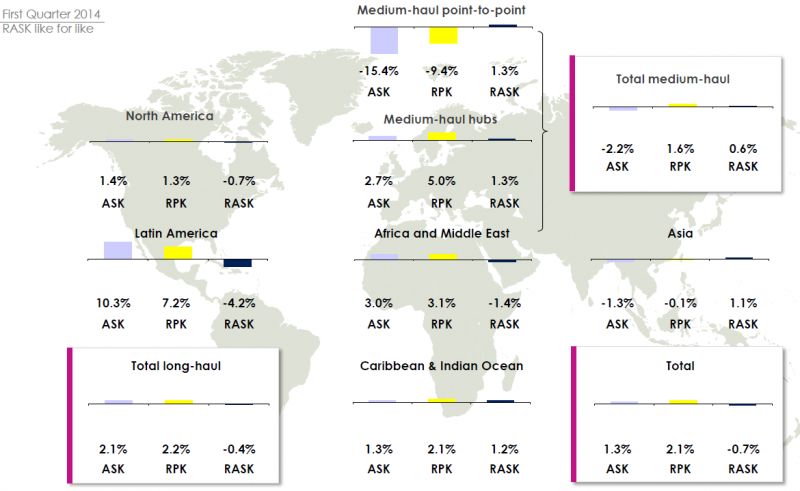 The cargo segment cut capacity (available tonne kilometres) by 0.9% year on year and saw traffic growth (revenue tonne kilometres) of 1.9%, with cargo load factor growing by 1.8ppts to 64.8%. Pricing remained weak, however, with yield falling 5.7%. The load factor gain partly offset this, so that unit revenue (revenue per available tonne kilometre) fell at the lesser rate of 3.0% (a fall of 1.0% at constant currency). Cargo unit costs fell more rapidly, by 5.4% (3.7% at constant currency), leading to the narrower operating loss for the segment. 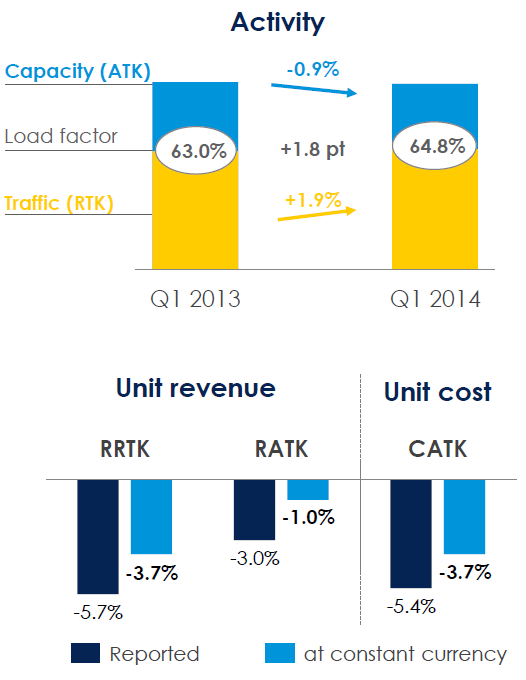 Although cargo results are improving, Air France-KLM said, "the recovery of cargo demand is taking longer than expected, and further scenarios are now under consideration to restructure the full freighter business in order to accelerate the turnaround."

On the conference call with analysts, Mr Riolacci said that these scenarios ranged from the group continuing to operate full freighters itself to bringing in outside partners.

While commenting that full freighters were "necessary to value belly cargo", he added that he was "rather pessimistic" on the cargo market and that market capacity would continue to increase due to belly space in new passenger aircraft. He also anticipated the return of stored freighters if cargo yields started to recover.

With this structural over-capacity situation in mind, the group had already decided to retire all of Air France's 747 freighters in 2015 (Air France had four at 31-Mar-2014), leaving only two Boeing 777Fs, and to outsource cargo operations at Paris Orly. KLM subsidiary Martinair also has seven 747 freighters and six MD-11 freighters. Clearly, Air France-KLM now feels that more radical measures may be necessary. A further update will be provided at the time of the 2Q results in late Jul-2014, according to Mr Riolacci.

The group's medium-haul leisure LCC, Transavia, saw fairly strong capacity growth, with ASKs up 7.6% in 1Q2014 as it assumed new leisure routes in the French market and took over some routes from Air France. It generated RPK growth of 8.4% and a load factor gain of 0.6 ppts to 86.3%. These positive developments were offset by a 4.3% drop in unit revenues, which Air France-KLM said was hit by the shift in Easter from 1Q in 2013 to 2Q in 2014.

Moreover, Transavia's unit costs fell by only 1.2% (down 0.5% excluding currency movements), less than the fall in unit revenues. This led to Transavia's reporting of a wider operating loss in 1Q2014 of EUR58 million compared with a loss of EUR51 million in 1Q2013. 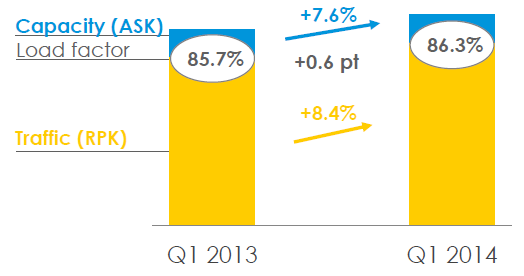 Transavia continues to report deteriorating year on year results (FY2013 saw it recording an operating loss of EUR23 million after breakeven in 2012), partly reflecting the price discounting that is often required for new routes. In Feb-2014, group CEO Alexandre de Juniac said he expected Transavia to be profitable in 2016, but this seems a long way off, especially as rival European LCCs easyJet, Vueling, Norwegian and Ryanair are profitable today.

The group's operating costs fell by 3.4%, more than the 2.2% fall in revenues, leading to the improved operating result. This cost performance was helped by a 6.3% decline in fuel costs. Non-fuel costs fell by 2.3%, more or less in line with revenues.

Labour costs, which are the biggest cost category, fell by 3.8% (including temporary staff). According to the company's statement: "At constant pension expense and scope, they declined by 60 million euros, well on track towards the 120 million euro reduction targeted for the full year". Headcount including temps, in terms of full time equivalents, fell by 2,700 (2.7%).

Headcount reductions have been achieved with a good degree of agreement from labour unions and industrial relations have been better than might have been expected given the scope of the cuts (more than 8,000 since 2011).

However, such coalitions can be fragile. A planned strike from 3-May-2014 by French pilot union SNPL, while not directed at Air France (the union's dispute is with the French government and relates to social and regulatory issues) could both disrupt the airline's operations and be a catalyst for unrest among other labour groups. 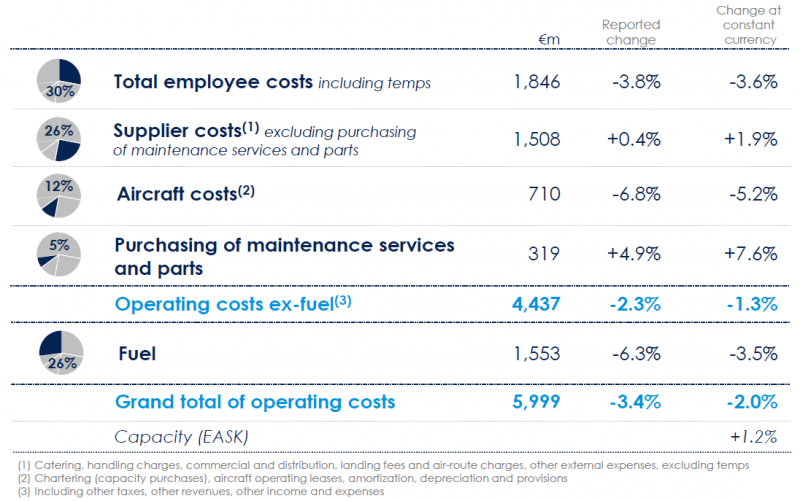 Targets reconfirmed, but there is still much to do

Air France-KLM reconfirmed its 2014 target to achieve EBITDA (earnings before interest, tax, depreciation and amortisation) in the region of EUR2.5 billion and its target to reduce net debt to EUR4.5 billion in 2015. These targets have slipped before and so their reiteration is to be welcomed.

The 2014 EBITDA objective would represent an improvement of EUR645 million from 2013's result of EUR1,855 million. The 1Q2014 improvement in EBITDA was only EUR66 million, leaving a significant amount still to do, although the first quarter of the year is seasonally weak and does not generally give a reliable guide to the rest of the year.

The group's Transform 2015 restructuring programme is delivering lower unit costs and losses are reducing, although, as the company says, "the operating environment remains tough". The continued weakness in cargo and the consequent need for further restructuring in that segment are sources of concern and the newer problem of the Caracas route is a further headwind. In addition, Transavia is yet to convince that it can significantly add value in Air France-KLM's medium-haul network.

Even if Air France-KLM can hit its 2014 target, it will still have to make significant further improvements in profits in order to cover its cost of capital. What is clear is that there can be no relaxation in Air France-KLM's restructuring programme if its targets are not to slip again.